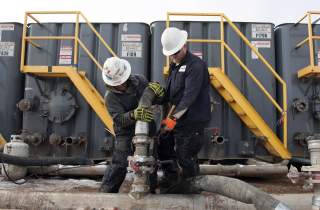 The following is the first piece of a multi-part series on the geopolitical implications of the U.S. Shale Revolution. You can read the second article here.

The United States stands on the precipice of global energy supremacy. Over the past decade, the confluence of innovative drilling techniques with favorable market and regulatory conditions has made the extraction of tight domestic resources economical. This has resulted in an energy boom which has transformed fears of American energy shortages into proclamations of energy dominance. But is it here to stay?

Not long ago, the U.S. was threatened with declining oil reserves and a growing reliance on energy imports. However, now it is the largest producer of petroleum liquids and natural gas in the world. With the termination of the Crude Export Ban in 2015, shipments of cheap American oil and gas are entering the world’s busiest energy markets and changing the playing field. U.S. exports have degraded the Organization of Petroleum Exporting Countries (OPEC)’s market influence and bolstered U.S. foreign-policy leverage. Furthermore, record-setting American onshore production is also driving a resurgence in U.S. manufacturing.

Demand for new infrastructure, technology, and skilled labor in the oil and gas value chain has become a reliable engine of economic growth. Lower feedstock and energy prices also translate to cost advantages for domestic heavy industries, increasing America’s global competitiveness. Finally, despite consuming more oil and gas than any other country in the world, the United States is on pace to become a net energy exporter before 2025. The Shale Revolution is here.

Shale’s value to U.S. energy security is a function of the sector’s long-term economic viability. So long as tight oil and gas projects continue to pump, the United States is better prepared to weather global energy shortages and price spikes. The meteoric rise of these new energy sources over the past decade has lifted total U.S. crude output from four million barrels per day (bpd) in 2008 to ten million bpd in 2018. Yet, despite these strong trends, looming economic and structural challenges could bring an abrupt end to the shale phenomenon.

Financially, shale is a debt-fueled enterprise. The hundreds of independent exploration and production companies which made the boom possible have spent $265 billion more than they generated since 2010—relying on cheap credit, equity sales, and asset backed lending to remain solvent. One of the major drivers of these expenses are certain technical and geological facts that are unique to these new, unconventional forms of drilling. By their nature, horizontally drilled and fracked wells exhibit much steeper decline rates in their initial production than their conventional (vertical and offshore) counterparts. At the same time, the lion’s share of production occurs within the first year or so of well completion. These two facts combined mean that well operators are in a continuous race to drill wells just to sustain output levels. In addition, this race has fueled fears that the cheapest areas to drill have already been developed and therefore shale’s continued growth could be less than certain.

Rather than projecting the output of shale oil and gas in coming years, we should instead pay close attention to shale’s longer term economic viability. Does the existing shale model remain resilient to endogenous and exogenous change? Are there sufficient recoverable oil and gas reserves in the ground and are they economically viable? Numerous factors play into the economics of a shale project, but the so-called “breakeven point,” or “breakeven cost,” (i.e. when revenues meet fixed and variable costs) has special salience. At the break-even point, a project becomes cash-flow neutral.

In the context of a new shale development, the full-cycle breakeven point reflects the market price per barrel of oil, or cubic foot of gas, where returns prove sufficient to cover all lifetime project costs. As a shale project matures, so too does its break-even point. Once the up-front costs of exploration and leasing are covered, companies transition to the “half-cycle” breakeven benchmark, which captures the price of drilling, stimulating, and operating a well. Fully producing wells require no additional investment in a normal business cycle; therefore, bringing one additional barrel to market becomes the indicator of financial feasibility. Some shale deposits are better geologically, such as the Permian Basin in West Texas, and require less work to exploit. This means lower break-even costs relative to other regions.

During 2011—2014, oil often traded above $100 per barrel (bbl). The full-cycle breakeven price for shale extracted oil ranged from $60/bbl to $90/bbl. Even with energy prices high, and interest rates low, shale operators adopted an unprofitable “growth at any cost” model. They relied on a constant stream of debt finance to help sustain production levels. During this period, tight oil output increased from nine hundred thousand bpd to 4.5 million bpd, reaching half of total U.S. production. Fracked natural gas rose, from ten billion cubic feet per day (bcfd) to over forty bcfd. To achieve this, U.S. operators added rotary drilling rigs at a rate of 215 units per year—more than all active rigs in Canada. By mid-2015, shale accounted for five percent of the globe’s 98 million bpd supply of crude.

The high oil prices did not last. The shale industry had no choice but to adapt. By 2015, U.S. tight oil had entered a market already experiencing weak demand, the result of sluggish global economic growth. OPEC’s reaction to the rise of shale production forced global price levels even lower. Rather than cutting supply to boost prices, the cartel opted to increase production and protect market share. By flooding the market, OPEC hoped to bring the price of oil sufficiently low to snuff out its higher-cost competitors in North America. The predictable outcome: an oil glut, followed by an oil price crash. Brent crude prices fell from their high of $136/bbl in mid-2014 to under $32/bbl in January of 2016.

The consequences for shale U.S. field operations was immediate and intense. Shale operators accustomed to $100 oil struggled to survive. Many went under: between August of 2015 and May 2017, over 120 North American oil and gas companies filed for bankruptcy, imperiling $80 billion in both secured and unsecured debt. In those two years, the number of active drilling rigs plummeted by fifty percent, from 1,200 to six hundred. America’s crude oil production dipped in 2016, the first time in nearly a decade, falling from the previous years’ 9.5 million bpd to 8.8 million bpd. The OPEC strategy seemed to be working.

But shale has proved far more resilient than expected. As oil prices fell, so did the number of drilling rigs and the service costs associated with running them. This resulted in cheaper operating costs. Companies closed their least productive wells and focused on better performing sites—a strategy known as high-grading. And technological improvements across every phase of well development, including the use of advanced imaging technology to identify geological sweet-spots, led to substantial productivity gains at lower cost. Other contributors include longer well lengths, multi-pad drilling and greater injection volumes of sand and water.

American bankruptcy laws also helped keep shale operations afloat. Filing for bankruptcy enabled shale firms to shed billions of dollars in debt and to restructure their operations. A reported eight of the ten largest shale corporation to file for Chapter 11 remain in business today. Smaller operators and their assets were bought out by companies with capital to invest, leading to a sector-wide consolidation. Perhaps the most vital contributor to Shale’s eventual rebound was Wall Street. Enthusiastic capital markets acted as financial lifeline for shale, offering $26 billion in bond financing through the harshest portion of the downturn in 2016.

Today, as production levels reach all-time highs, the breakeven point for tight oil projects are a fraction of what they were in 2014. According to Rystad Energy, the median breakeven point for shale oil in the top fifty most commercial acreages ranges between $23/bbl and $49/bbl. In addition to new efficiencies and better experienced frac crews, breakeven costs were lowered by finding more mature shale deposits. By concentrating on these, many costs such as expenditures for exploration, land acquisition, pad construction, and transportation infrastructure have become no longer needed.

Additionally, more operators now choose to drill wells without fracturing them, leaving oil and gas unreleased until commodity prices are favorable. The EIA estimates that the breakeven price for these drilled but uncompleted wells is on average 39 percent below the breakeven price for a new well. Some six thousand wells are currently drilled but uncompleted, versus 4,500 in 2015, with most of them in the Permian.