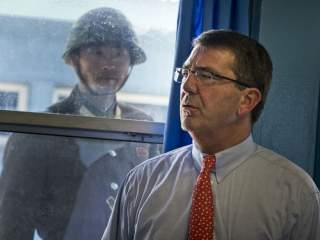 The persistent North Korea nuclear weapons crisis is generating heightened fear among the countries targeted by Pyongyang for hostile signaling, including the United States. Washington reacted strongly to the DPRK’s fourth nuclear test in January, leading the effort in the United Nations Security Council to impose a new set of sanctions that observers say is tougher than usual. Nevertheless, it is uncertain whether China will fully enforce these sanctions, and indeed whether any sanctions short of a total international economic embargo (to which China is not agreeable) would force Pyongyang to abandon its nuclear weapons and intercontinental ballistic missile (ICBM) programs.

A growing number of critics say America’s “strategic patience” policy toward North Korea has failed. Washington offers the possibility of improved economic and political relations with North Korea if the Kim Jong-un regime will recommit itself to denuclearization, as it did conditionally in 2005 before that deal fell through. Since then, however, Pyongyang has repeatedly emphasized that it intends to keep its nuclear weapons permanently and wants recognition from Washington as a nuclear-weapon state. While the bilateral relationship remains stagnant over this issue, the DPRK continues to make progress toward a workable ICBM that could strike all parts of the United States, as indicated by regular rocket launches and nuclear test explosions. As part of its strategy to pressure Washington to drop the precondition and return to negotiations, Pyongyang is bellicose toward the United States, creating the impression that the North Koreans are anxious to nuke Americans. In January the DPRK released a none-too-subtle video depicting a nuclear attack on Washington, DC.

A popular alternative policy advocated by many analysts is a negotiated cap on North Korea’s nuclear weapons and missile programs. Under the status quo, as long as they are willing to endure the hardship of sanctions, nothing stops the North Koreans from developing a nuclear ICBM and then deploying an unlimited number of them. It is reasonable to argue that this situation is intolerable, is out of touch with reality and demands that Washington abandon the precondition and open negotiations with Pyongyang.

If not actually preventing the North Koreans from making a fully functional nuclear ICBM—experts disagree over how close the DPRK is to achieving this capability—a negotiated cap at minimum could limit the size of the North Korean arsenal. The idea of a negotiated cap is most appealing if we accept the assumption that DPRK and US delegations could agree on locking in an arrangement that ensures DPRK self-defense but poses no compelling danger to South Korea, Japan or the United States.

Seeking a negotiated cap, however, has several formidable downsides. First, agreeing to negotiate with an outlaw state under the gun would be a defeat for the United States, calling into question American leadership in the minds of U.S. friends and adversaries worldwide. This capitulation would not only reset U.S.-DPRK relations to America’s disadvantage, but also may embolden other tyrants to take dangerous steps, particularly acquiring their own nuclear arsenals.

Second, since a cap is not a reversal, an agreed cap would include American acceptance of North Korea as a permanent nuclear weapon state. U.S. allies South Korea and Japan would perceive this as a betrayal by the United States government. With their confidence in Washington and their sense of security both reduced, these two countries would think more seriously about getting their own nuclear weapons, a disaster for nonproliferation and perhaps the beginning of the end of the two key U.S. alliances in Asia.

Finally, the basic premise underlying the idea of a negotiated cap is highly dubious. Americans could not agree to a cap that allowed for a reasonable possibility that the DPRK could carry out a successful nuclear strike on an American city. The most Washington could agree to would be a very small number of DPRK missiles, and only under the expectation that a U.S. antimissile defense system could handle them. For Pyongyang, however, a capability that could not hold the Americans at risk would provide no deterrent value. An arsenal small enough to be lost in a preemptive enemy first strike, or that lacked the power to frighten an enemy away from contemplating an attack or invasion, would not meet North Korea’s minimum security needs. There is probably no middle ground on which to base an agreement. A circumstance acceptable to one side would almost by definition be unacceptable to the other.

If the North Koreans did somehow agree to an American proposal, the likelihood is high that they would cheat on it. Airtight verification is impossible. Secretive and deeply suspicious of the United States, North Korea is particularly cantankerous and would resist on-demand inspections even if it were acting in good faith. If the DPRK were determined to clandestinely bolster its capabilities in violation of an agreement, the United States cannot realistically expect that any system of outside verification could expose all such activity, especially now that the North Koreans can make nuclear weapons fuel from uranium, which requires smaller facilities than a plutonium program. Thus, as unlikely the North Koreans are to agree to an American-proposed limit on their program, we should be skeptical if they did.

The problems with seeking a negotiated cap are too daunting to make this a better approach than the admittedly dismal prospect of learning to live with the North Korean bomb. As we well know by now, managing relations with the DPRK is not a business that offers clean or easy solutions.

Denny Roy is a Senior Fellow at the East-West Center in Honolulu. His latest book is Return of the Dragon: Rising China and Regional Security (Columbia University Press, 2013).