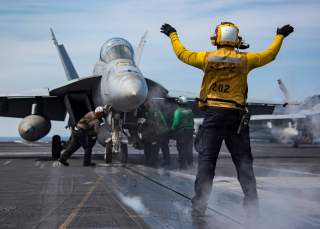 Learning from history can be useful but can sometimes also create intellectual traps for policy makers when they misapply those so-called “lessons from history”—and, in some cases, play fast and loose with them.

For much of the post-1945 era, Western leaders, applying the lessons of World War II, operated under the assumption that the adoption of a policy of appeasement towards Nazi Germany, symbolized by the agreement that the British and French leaders signed with Adolf Hitler in Munich in 1938, helped encourage German military aggression that eventually led to the breakout of war in Europe.

The result was that the United States and its Western allies held to the conviction that they needed to avert another Munich, which meant that they had to adopt a tough and uncompromising diplomatic and military stand against any potential aggressor, whom they were quick to compare to another Hitler.

So if Egyptian nationalist Gamal Abdel Nasser and Vietnamese leader Ho Chi Minh were “like Hitler,” failing to use military power in response to any bellicose action on their part would amount to appeasement.

Indeed, both the catastrophic British-led military campaign against Egypt in 1956 after Nasser nationalized the Suez Canal and the long costly American military intervention in Southeast Asia were driven in part by the spectre of Munich.

But then the long and costly American military quagmire in Vietnam ended up giving birth to another historical analogy—or to the lessons of Vietnam.

The new concern in Washington was that U.S. military interventions abroad could lead to another Vietnam. Even the deployment of a small contingent of U.S. Marines in response to this or that international crisis could turn out to be a slippery slope to another disastrous military fiasco.

Washington was only able to discard the Vietnam analogy, or what came to be known as the Vietnam Syndrome, in the aftermath of the first Gulf War in 1991, when under the leadership of President George H. W. Bush and his generals, the United States won a victory in Mesopotamia by forcing Iraqi military forces to withdraw from Kuwait and then bringing U.S. troops back home.

That war demonstrated that the Americans can fight and win a war that has clear strategic objectives, while keeping the cost in lives and U.S. dollars manageable. So bye-bye Vietnam!

But then came the second Gulf War, and the decision by President George W. Bush to “liberate” Iraq, oust Iraqi leader Saddam Hussein and launch an ambitious and costly project of creating a functioning democracy on the shores of the Euphrates.

If the first Iraq War liberated the Americans from revisiting Vietnam, the second Iraq War introduced a series of new lessons: that the United States should not attempt to occupy another Middle Eastern country and undertake more regime change and nation building in the region, and that it should at all cost avoid another Iraq.

And, indeed, the Iraq Syndrome would have a major effect on Washington foreign-policy decisions in the following years. It explains why both President Donald Trump and his predecessor in office, President Barack Obama, refused to greenlight U.S. military interventions in the Syrian Civil War, and why every report about U.S. military personnel operating in the Middle East, or another place most Americans cannot find on the map, has created anxiety in Washington and among Americans that the United States would soon be sucked into another Iraq.

That is probably also the reason why President Trump’s toughening approach towards the Islamic Republic of Iran, and his criticism of the Obama administration’s nuclear deal with Tehran, coupled with the anti-Iran rhetoric that he and his top national-security advisors have employed, have sown hysteria among those who have been drawing their lessons from Iraq.

In a recent op-ed in the New York Times, with the ominous headline, “A Familiar Road to War,” retired Army colonel Lawrence Wilkerson, who was chief of staff for Secretary of State Colin Powell, warns that the Trump administration is pursuing a campaign of disinformation against Iran as part of an effort “to create a false impression that war is the only way to address the threat posed by Iran,” akin to the playbook that the Bush administration used to mobilize congressional and public support for a war in Iraq.

Wilkerson recalls assisting Powell in preparing his presentation at that United Nations in justification of a preemptive war with Iraq, based on the flawed CIA conclusion that Iraq was in possession of weapons of mass destruction. He compares that to the Trump administration’s claims that Iran has failed to comply with the nuclear deal and charges that it was trying to create “a narrative in which war with Iran is the only viable policy.”

But the choice facing the Bush administration in 2003 was not between invading Iraq and ousting Saddam, on one hand, and doing nothing in response to Baghdad’s threats, on the other. In fact, during discussions among the top foreign-policy decisionmakers in the Bush administration, Powell was initially opposed to a forcible overthrow of Saddam, and proposed the continuation of a containment policy that could force Baghdad to allow full access to international weapons inspectors to investigate whether it acquired WMDs.

Powell eventually agreed to go along with the Bush administration’s determination to remove Saddam, recognizing perhaps that in the aftermath of the 9/11 terrorist attacks, Congress and the American people would inevitably allow the commander in chief to use U.S. military force in order to avert another 9/11.

But then it took the duration of the costly Iraq military fiasco and the failed freedom agenda for the American people to unlearn what had proved to be the wrong lessons of 9/11, including the idea that Washington should be in the business of regime change and nation building in the Middle East and elsewhere, and to absorb the lessons of Iraq.

The point is that no American president would now be able to win congressional and public support for pursuing another Iraq, this time in Iran—something that President Trump, who had campaigned to extricate the United States from its Middle Eastern quagmire, probably recognizes.

President Trump has stressed that core U.S. national-security interests, and not crusades to spread democracy, would determine his strategy towards Iran—and, for that matter, towards China and Russia. What would matter would be the extent that their interests would align with those of Washington, and not whether those countries were adhering to democratic principles.

From that perspective, it is doubtful that President Trump is planning to change the regime in Tehran or to try to remake it into a liberal democratic nation. His expression of support for antiregime protesters in Iran was aimed to put pressure on the regime and constrain its ability to expand its influence in the region.

President Trump has criticized the nuclear deal that President Obama signed with Iran, although he has refrained from rescinding it. At the same time, he seemed to have aligned his administration with the Arab Sunni regimes led by Saudi Arabia and Egypt, along with Israel, who have warned him that Iran, together with its Shia satellites in the region, wants to establish itself as a regional hegemon and is intent on eventually acquiring nuclear weapons.

The message from the White House has been that, unlike his predecessor, President Trump wants to work with the Arab Sunnis and the Israelis to counter the Iranian Shia powerhouse as it attempts to spread its influence in the Persian Gulf and Levant, posing an existential threat to both the Saudis and the Israelis.

Critics of this policy certainly have a case. They can express concerns that the United States could eventually be drawn into another Middle Eastern war that would involve Iran, Saudi Arabia and Israel, and be forced at one point to deploy its troops to the region, or have American “boots on the ground.” The lessons of Vietnam warn us of following a slippery slope or mission creep into conflict.

Moreover, critics can challenge the White House’s proposed strategy of allying the United States with Saudi Arabia and Israel to contain Iran—for instance, by proposing the alternative approach of pursuing a diplomatic opening with Iran à la the opening to China in the 1970s, which could conclude with an American grand bargain with Tehran, including a recognition of its growing power in the Middle East.

It is not clear whether such an alternative strategy is realistic and workable, and whether it could win the backing of Congress and the public. But critics of the White House’s evolving Iran strategy should understand that Iraq Syndrome remains alive and well in Washington, and that the Trump administration is not wandering into war with Iran, but into a policy of containing the Islamic republic.