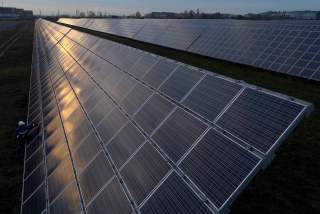 An interesting report titled “10 Geopolitical Risks We Are Watching” was released in late October by BlackRock (BLK), the world’s largest publicly traded investment management firm. The report surmises, “that markets are calm but geopolitics are anything but.” Wind and solar energy—two leading renewable energy options—could possibly be a dangerous part of an energy mix as the world continues on a downward geopolitical scope because they aren’t as reliable the way coal, nuclear and natural gas are at this time.

Moreover, renewable energy is intermittent and unreliable, can only produce consistent energy under certain weather parameters and can only be stored at scale at this point in time. Renewable energy options are also tough on the environment because wind and solar energy requires the use of large tracts of land compared to conventional, reliable fossil fuel energy.

Renewables though are consistently publicized as growing more than fossil fuels, but that is misleading. Unless hydroelectricity is being produced under a controlled scenario with dammed water, then renewable energy is inferior to coal, nuclear and natural gas powered electricity. While renewables don’t emit carbon dioxide, they unfortunately may not be the solution to lower emissions when examined closer. This is where a dangerous geopolitical climate can arise for nations wholeheartedly pursuing renewables, because of their false promises, high costs and unreliability for unstable nations that need stable, secure and scalable energy that fossil fuels provide.

In a new paper by the Center of the American Experiment, titled “Energy Policy in Minnesota the High Cost of Failure,” chronicles Minnesota’s $15 billion experiment with wind energy over traditional fossil fuels. The result was that wind energy didn’t lower CO2 emissions and caused Minnesota’s price of electricity to rise above the national average for the first time on record. Imagine this on a larger scale—take Africa as an example—where 635 million Africans live without any form of modern energy at this time. This lack of scalable, affordable energy that fossil fuels and nuclear energy provide can be construed as a direct correlation for the inherent instability of Africa, its lower economic growth, higher rates of overpopulation and lacking the wherewithal to combat radicalization by groups like ISIS throughout the continent.

The reliable energy problem grows when you include figures by the International Energy Agency (IEA), stating that 1.2 billion people worldwide are also without power. If the United States still can’t figure out how to lower electricity costs using renewable energy then it is doubtful that others can at this time. This could be dooming over a billion people to higher costs they can’t afford, an unreliable energy supply and more than likely needing high emitting, coal-fired power plants as an energy backup. The smarter decision is to follow Warren Buffet's lead by investing in fossil fuel to help avert the geopolitical disasters that renewables could cause fragile nations in need of scalable, reliable energy options. The Energy Information Administration (EIA) has estimated that 77 percent of the world’s energy needs by 2040 will still be met by fossil fuels.

Electric vehicles (EVs) also run into the same geopolitical problems as renewable energy while also needing enormous government subsidies. Something that Mr. Buffet discovered when he bought a controlling stake in Pilot Flying J, the truck-stop chain that sells food, coffee and diesel to truckers on U.S.-cross country hauls. Mr. Buffet believes that EVs or autonomous vehicles won’t replace combustible engines powered by gasoline. He reiterated this stance on Bloomberg Television when he said: “Who knows when driverless trucks are going to come along and what level of penetration they have have?”

Bloomberg and Bloomberg New Energy Finance (BNEF) have touted that EVs will overtake cars run on gasoline by 2025 in affordability. Mr. Buffet may have read that in BNEFs fine print in these reports that explains that, for EV forecasts to be true, government regulators have to push taxes, mandates and publicly-funded rebates to make EVs as cost effective as a gasoline-powered vehicle. Fiat loses $20,000 on every EV, General Motors loses $9,000 on every Chevy Bolt and Tesla sustains profits by selling zero-emission credits to conventional car companies. If California and other countries ban gasoline-powered cars then where would the profits be replaced?

This becomes geopolitically troubling is when China, India, the U.K., France and even California talk of banning the combustible engine between 2030-2040. As an example, it will be difficult for California to ban gasoline-powered cars the same way it will be nearly impossible in the coming decades for the other above-mentioned countries to accomplish that goal. The British EV push is particularly troubling since the vote on Brexit and the decision to move away from the European Union along with the security of the post World War II order of economic prosperity.

Canadian engineer David Booth wrote about California, going back to that example, and the massive amount of energy needed to match a typical filling station. When it comes to what an EV-only station would require when gasoline-powered cars are banned, he wrote: “An electric filling station would have to have the 30 megawatts of capacity available, equivalent to the electricity use of 20,000 homes to supply electricity to charge 25 or 30 million vehicles in California.”

Thinking geopolitically, what happens to energy legacy industries (coal, natural gas, gasoline) during the phasing out process? The Chinese example is particularly troubling as they are building the dirtiest emitting coal-fired power plants in Pakistan. India is countering the China-Pakistan alliance by building the largest coal-fired power plant in recent memory on the Great Barrier Reef in Australia.

These type of energy policies lead to environmental degradation that causes wars, water shortages and business decisions that seem to be more about establishing green credibility instead of energy stability. China, Pakistan and India going back and forth using energy as a weapon is similar to how the Russian state-owned energy firm Rosneft is the Kremlin’s weaponized foreign policy instrument against the West.

The company has used what the New York Times called “Rosneft’s Venezuela model” to support belligerent governments in Syria and Iran while driving a wedge between NATO, Turkey and the West. Going with unstable, intermittent energy (renewables) and costly transportation options (EVs) is a means for geopolitical influence and counter pressure points to be used against peaceful nations and governments.

Energy is the building block for thriving, human flourishing to exist. Stable, reliable, scalable energy that coal, nuclear and natural gas provides can be used as a counter to nations like China, Iran, and Russia (CIR) that seem to be on a hegemonic march to acquire additional energy resources. As popular as renewable energy and electric vehicles are at this time they both can be used geopolitically against peaceful nations. This weaponization of energy can be stopped by Western-aligned nations embracing the abundance that fossil fuel provides and bringing over a billion people out of energy poverty. Let’s keep working on futuristic energy and transportation but stop playing energy checkers while CIR-nations play energy chess.