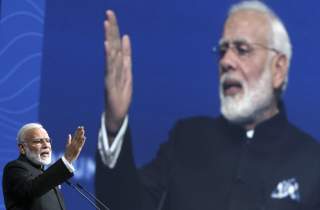 MARRIAGE BETWEEN the Economist and the New Left Review may seem like one of Hieronymus Bosch’s stranger copulations. Liberal capitalists and Marxists have been drawn passionately together over the past few decades in one area: their common utopian belief in the development of a globalized world without nationalism and national borders, a dream now dying in the West. Elsewhere, it never really took root beyond sections of the Western-influenced (and often Western-subsidized) intelligentsia.

Nationalism has frequently been described as a form of religion, and as the social scientist Liah Greenfeld writes,

Like the great religions of the past, nationalism today forms the foundation of our social consciousness, the cognitive framework of our perception of reality. Seen against the record of the great religions’ historical longevity and continuous vitality over centuries of political, economic and technological change, the recognition of this functional equivalence may give us a more accurate idea of nationalism’s projected life span and pace of development.

The strongest states in Asia today are those with strong nationalisms, which are central to the legitimacy not only of the present regimes but of the states themselves. The development of strong senses of national identity is not only a regime strategy; it also reflects a much broader awareness in society—bred from historical experience—of the dreadful consequences of national disintegration. The consequences of not possessing strong unitary state nationalisms are all too apparent in the Middle East today, where a row of states has been torn to pieces by the rival allegiances of sectarianism, ethnicity and supranational religious ideology. (The same is true of Afghanistan, where the utter fatuity of the idea of Western “nation building” has been starkly revealed.) The disastrous results of a lack of common national identity are also apparent across much of Africa. Therefore, it seems that the only thing worse than having a nationalism that is too strong is having one that is too weak.

One of the reasons why parts of Western society fell so comprehensively for ideas of multiculturalism and the weakening of national identities and borders was an intense complacency about the stability, unity and strength of Western states. The European Union itself only worked—for a while—because the states that pooled some of their powers had real powers to pool and felt confident enough to lend some of them to the EU. Elsewhere in the world, people remember very well that they have no grounds for such complacency. These grounds for complacency are now also disappearing in the United States and the West, as political, cultural, ethnic and religious cleavages deepen and—in the absence of strong new ideologies dedicated to reunifying nations—risk becoming irreconcilable.

CENTRAL TO the liberal-capitalist and socialist faith in the inevitable and desirable disappearance of nationalism has been the belief that it is an artificial modern construct, developed by elites and then spread to populations. And what is constructed, the argument goes, can be deconstructed—a thought that linked the analysts of nationalism to Jacques Derrida, Michel Foucault and powerful tendencies across wide swathes of academia. The constructivist school of studying nationalism was first developed by Ernest Gellner (for the liberals) and Eric Hobsbawm (for the Marxists). They were joined by legions of followers soon after.

From the start, the constructivist approach had its critics. They acknowledged the new elements of national consciousness introduced by modern mass politics and mass society, but also insisted on the antiquity and strength of collective identities and allegiances (whether or not called “national”). The strongest modern nationalisms, they argued, were precisely those that were able to draw on older roots. The constructivist camp itself produced new and more sophisticated variants, notably that of Benedict Anderson, who traced the origins of nationalism to the appearance of print rather than to the industrial revolution as such, and portrayed it as a process of collective imagination—and like imagination, a partly subconscious process—rather than of artificial and calculated creation. This gave rise to specific studies examining how various nationalisms were generated from below, in response to new circumstances, rather than being simply cultivated from above.

In the meantime, however, a shallow and vulgarized version of the constructivist theory had achieved a form of hegemony in most of academia, the media and think tanks. The notion of nationalism, nationalist sentiments and allegiances as an artificial creation of cynical and self-serving elites became a standard unthinking, automatic trope, even on the part of people who did not consciously identify with the socialist or liberal traditions. Thus, at a conference at Lewis and Clark College on ethnic conflict in the late 1990s, I heard that “Greeks and Turks lived together in peace on Cyprus until politicians divided them in the 1950s”; “Bismarck was an ethnic entrepreneur who invented German nationalism in the 1860s”; and “stories of Croat atrocities against Serbs in the Second World War were an invention of the Miloševic regime.”

For these ideas to gain such purchase required an unusually deep, rich and varied set of motives, some of them noble, others less so. First, of course, comes the ancient Judeo-Christian vision of the Peaceable Kingdom: “The earth will be filled with the knowledge of the Lord, as the waters cover the sea” (Habakkuk 2:14). This tradition flowed into modern socialism, and became mixed up with the underlying socialist and radical liberal belief (so deep as often to be unconscious) in the sinlessness of man in his original natural state, uncorrupted by wicked influences.

Such feelings were given tremendous strength by the European catastrophes of the first half of the twentieth century, seen (often rightly) as the product of nationalism run mad. The European reaction against nationalism found its institutional expression in the development of the European Union, seen by much of the Western intelligentsia as the future of all humanity. The EU was, for a time, very successful both in economic development and in banishing war from western and central Europe. Missed in all this was the way in which certain European states have seen the EU not as an opponent of their nationalisms but as a new vehicle for them, and have started to turn against the EU once it became clear that this was not the case.

This has been evidently true of the eastern European countries that joined the EU after the collapse of the Soviet bloc. The spread of democracy and free-market capitalism to these countries was the only substantial victory for liberal internationalism after the end of the Cold War, and was therefore trumpeted as a universal model, applicable all over the world. Completely ignored in all this—one is tempted to say deliberately ignored for ideological reasons, at least by George Soros’s Open Society Foundations and other such bodies—was the role of nationalism.

Eastern European populations with deeply conservative social and cultural attitudes (preserved for decades by the carapace of Communism and socialist economic attitudes), were persuaded to accept EU policies that they detested because this was the price of joining the EU and NATO, and thereby getting away from the even more hated power of Moscow. Nationalism therefore worked for EU and NATO expansion and, for a while, for democracy and economic reform in a way that it cannot possibly do in other parts of the world. With EU and NATO membership secured, Poland and Hungary in particular have reverted to older tendencies, including ethnic nationalism. This tendency has especially been brought to the fore by what is seen as the EU’s role in enforcing openness to Muslim migration, thereby threatening the ethnic composition of these states in a way never attempted by Soviet Communist hegemony.

The result is a wave of anti-EU nationalist sentiment in eastern Europe, which is contributing to the fraying of the EU as an organization and a vision. Nowhere in the EU, however, did a common European identity come to prevail over a sense of bounded national communities. Even at the height of the EU’s apparent success, national media were overwhelmingly concerned with national issues, and turnout for elections to the European Parliament were miserable compared to national elections.

IF THE reaction against nationalism on the part of European intellectuals was nonetheless understandable given Europe’s terrible modern history, the behavior of their American equivalents was more surprising—for the United States was founded in a national separatist rebellion, has a political culture inexorably attached to the idea of the absolute national sovereignty of the American people, and—as any visitor to the United States can see—is absolutely permeated by symbols of national allegiance and pride. Moreover, from the 1890s to the 1950s, American nationalism had a positive connotation not just for ordinary Americans, but for much of the progressive intelligentsia. Though its roots lay deep in American and pre-American British history, the term itself had been coined towards the end of the nineteenth century by progressives seeking a way of assimilating and gaining acceptance of the millions of new immigrants from societies radically alien to core U.S. traditions, as well as binding up the wounds of the Civil War.

The turning of the American intelligentsia away from the idea of U.S. nationalism was the result of the European catastrophe, and more immediately the effect of the influx of European academics to American universities, knowing very little of the U.S. tradition, but naturally imbued with hatred and fear of nationalism. This then fused with two other ideas: that nationalism is inherently antimodern, and that the United States is the leader and epitome of global modernity. The logical result of this combination was a belief not that American nationalism is bad, but that there is no such thing as American nationalism—as, to my stupefaction, I was repeatedly told by U.S. academics when my book on American nationalism appeared in 2004. What America had, I was told, was patriotism—a sane, moderate, rational attachment to democratic institutions and traditions, devoid of nationalism’s chauvinism, paranoia, bluster and aggression. Many of the same people who said this are now, of course, in a state of hysteria that so many Americans voted for the dreaded Donald Trump.