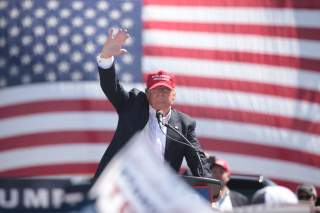 Forty years ago, a series of commercials with the tag line “When E.F. Hutton talks, people listen” made the stock brokerage firm one of the most recognizable brands in America. Thanks largely to his tweets, President Trump can make the same claim. When he tweets, not only do people listen, some of them get very angry. China’s state media even called him out for his “ill-advised Twitter diplomacy.”

Certainly, Trumpian tweets can be unsettling. But the issue is: How much will they drive both American foreign policy and the world’s response? Contrary to popular belief, the answer is probably not much.

Both talk and action define national policy. Words, however, are the handmaiden of governance, not its mistress. History remembers Reagan’s historic foreign-policy demand: “Tear down this wall.” It still resonates, not so much because it was a great line, but because the words were backed by action. Pushing back against the Soviet Union was a core tenet of Reagan’s foreign policy. In the end, the wall did come down. But it took more than a speech to make it happen.

In contrast, it is hard to recall a single memorable statement from President Obama’s 2009 speech to the Muslim world in Cairo, Egypt. Doubtless it contained lines that could have been worth remembering. But the policy articulated in the speech failed to deliver any historic achievement. Instead, global terrorism got worse, the old animosities linger, and the region appears as fractious as ever.

For the most part, rhetoric unmatched by action is not a particularly powerful force on the world stage. Further, rhetoric is a small part of governance. If government could have been run by tweet, both Bush and Obama would have done that long ago.

Much of the complaint about Trump’s tweeting is that, at this point, there is little much else to go on. That’s a fair comment, particularly before the inauguration when there was no government action to analyze.

Even now that the president is in the Oval Office, those trying to divine how this administration will work have little new to go on. That may sound strange, as Trump appears to be off to one of the most activist starts of any president in modern history. Within the first two weeks, he had already issued twenty-two executive orders.

Trump stormed out of the starting gate because of the Presidential Transition Act, which facilitated establishing a robust transition infrastructure months before the election. It’s that infrastructure that provided the capacity to deliver a blizzard of executive guidance starting from day one.

But the executive orders don’t say much new. Most simply track with concrete campaign promises the president made before the election. For example, Trump had repeatedly stated—and prominently featured on his campaign and transition websites—the intent to adopt “extreme vetting” to block foreign fighters from coming to the United States to commit acts of terror.

But on many foreign-policy topics—from the future of NATO to dealing with Putin—there were no hard and fast promises made during the campaign or (unsurprisingly) in the executive orders. These issues crop up mostly in tweets, offhand comments, interviews and the occasional leak.

Trying to infer policy from tweets, particularly the president’s tweets, can be maddeningly frustrating. It is often hard to figure out what he means.

To be fair to the president, critics tend to pick the comment they want to obsess about and ignore everything else. For instance, they went apoplectic over Trump’s statement that “NATO is obsolete” while ignoring positive comments he or other officials have made about the importance of the alliance. Similarly, those pushing the “Trump hearts Russia” narrative blithely omit mentioning the assurances he has given on key matters, like not pushing for lifting sanctions on Russia.

Of course words matter. But Trump does not use words as past presidents did. That has proven perplexing to Washington, DC and Washington watchers worldwide.

Trump is not the first “president with a difference” that Washington has found to be unsettling. Andrew Jackson upset the capital with his rough speak and outsider views. Dwight Eisenhower public demeanor also disturbed the force in Washington. After more than a decade of New Deal rule, the nation’s capital didn’t know what to make of a commander in chief who didn’t go the right cocktail parties, talk to the right reporters or hang out with the Georgetown set. Both Carter and Reagan also inflicted a bit of culture shock on the Washington establishment.

Odds are that Trump won’t stop being Trump while he is in the White House. Like past “outsider” presidents, Washington will have to get used to that.

Trump tweets to gain and maintain public attention. In just a few weeks as president, his Twitter following has almost doubled—to more than twenty-four million—far surpassing the followers of the official presidential account. His tweets, therefore, not only allow him to garner media attention, but they also allow him to address a huge chunk of the general public pretty much whenever he wants—bypassing the filter of the media and interacting with millions of followers who helped put him in office and instinctively take his side.

Even if Trump enjoyed wide support among the media, he would be foolish to relinquish such a powerful social-networking presence. And part of the reason that it is powerful, is that it appears to be genuinely the president’s voice (not that of a public-relations flack or communications intern). If Trump stopped acting like Trump on Twitter, then people would stop paying attention.

The power of Trump’s tweeting won’t endure forever. In the end, it is just rhetoric. When it comes to policy and, frankly, when it comes to the president of the United States, action matters far more than words. “The day of infamy” was a nice touch, but what got Emperor Hirohito’s attention was the bombing of Tokyo just four months after Pearl Harbor.

As the supply of executive orders cooked up by the transition runs out—and as the president’s cabinet falls into place and starts governing—Washington watchers will have something far more substantive than tweets to evaluate. Those assessments will say much more about how this government will govern.

And, as time goes by, astute Washington watchers will get better at parsing the rhetoric and action of the Trump presidency. In the end, the balance of both is what will reassure or worry allies and enemies alike.

As for the public debate over our president’s very public comments, presidential actions will no doubt influence that as well. If Trump governs well, those who erupt in fury over tweets may well be seen as hyperreactive shark-jumpers, and their perceived legitimacy as critics will diminish each time they become outraged anew. And if Trump doesn’t govern well, another satirical Saturday Night Live skit will be the least of his problems. No presidency can be saved with a well-timed tweet.