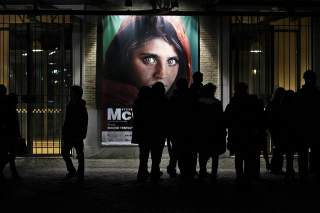 The severe realities and hardships faced by refugees continue to command the global spotlight. Yet their vast numbers are only represented rarely, through iconic images such as Afghanistan’s twelve-year-old girl, Sharbat Gula, and the three-year-old Syrian boy Aylan Kurdi. While Sharbat Gula won the attention and sympathy of the world with her striking eyes, Aylan Kurdi caused heartbreak when his dead body was discovered on the offshores of coastal town of Bodrum, Turkey. Both images truly changed people’s perspectives regarding refugees. These two pictures, which conveyed tragedy, pain and a struggle to live, were impossible to ignore. They sought fulfillment of their human rights, the dream of living in peace and dignity while avoiding persecution and bombardment in their respective countries.

Nobody thought that Steve McCurry, now a famous National Geographic photographer, would capture a miracle with his lens. He was unaware that a girl named Sharbat Gula at an Afghan refugee camp in Peshawar, Pakhtunkhwa, in 1984, would become the world’s most recognized symbol of civilian suffering.

After the Soviet Union invaded Afghanistan in 1979, millions of Afghans were forced to flee the country; the majority of them settled in neighboring countries, especially Pakistan and Iran. Due to millions of dollars in refugee aid to Pakistan, refugees were welcome. With propaganda spreading that Pakistan was the flagbearer of global Islam, Afghans fell into the trap such that radicalization among young Afghan refugees became a cornerstone for some Pakistani terrorist groups.

Refugees established their own camps and settled in different areas across the Pashtun belt of the Durand line. These refugees camps became breeding grounds for mujahideen “holy warriors” from around the world, encouraged by petrodollars via Pakistan to fight back and defeat the Soviet Union that had invaded their country. This game was bigger than poor refugees who were simply seeking a safe place to live.

Sharbat Gula left Pakistan and returned to Afghanistan in the 1990s to her hometown, Tora Bora, famous for hosting the late Al Qaeda leader Osama bin Laden. She was forced to flee to Pakistan again after the U.S. invasion of Afghanistan, especially when her hometown had become the target of U.S. bombings. She lived and continues to live a life of struggle and hardship—a symbol of what many Afghan refugees have faced throughout years of chaos.

Today, Afghan refugees in Pakistan are dealt with in an inhuman and undignified manner. Despite holding legal documents, Pakistani authorities raid and humiliate Afghan refugees and jail them. When Pakistan welcomed Afghan refugees, it was because of the huge amount of donor aid that was pouring through Pakistan’s government from international communities and organizations. Now in Pakistan, since there is very little aid and money, Pakistani media depicts good refugees as criminals, accusing them of taking local jobs and occupying businesses. It also portrays refugees as a burden on society, while the government jails most of them without legal justification for their imprisonment, which is against international law.

The famous “Afghan Mona Lisa,” Sharbat Gula, is one of those thousands of suffering Afghan refugees. Her house was raided, and she was taken to jail by Pakistani authorities on the grounds that she holds a fake identity card. She is a famous face, known to the entire world from the 1984 National Geographic cover. The Pakistani government showed no respect for her innocence and struggles, putting her in jail along with her children, despite the fact that she is fighting hepatitis C. If someone like Sharbat Gula, with a positive reputation among millions throughout the world, was living as a refugee in any other country, she would have been proudly accommodated as a special citizen of that state.

As Steve McCurry describes her, “She embodies humanity. There’s an empathy we feel with her. The first time I found her, she had a torn dress. This was a girl who was haunted, but has light. Her humanity, dignity, and character is something we can all identify with and appreciate.”

In today’s global village, the international community faces common problems and uses their shared resources to reach solutions. Thus, conflicts in one region or country, and ensuing humanitarian crises, have spillover effects on bordering states and even faraway territories. With this in mind, members of the global family are voluntarily helping each other—but Pakistan has been an unfortunate exception in this regard. They are humiliating and disrespecting Afghan refugees at a time when they are hesitant to return to their country, due to unprecedented instability. But the inhuman behavior of Pakistani security forces has led hundreds of thousands of Afghan to return to their homeland, despite growing insecurity.

Sharbat Gula is not the lone case of Pakistani authorities disregarding the human dignity of Afghan refugees compelled to live abroad, due Pakistan’s pursuance of a “strategic depth” policy and support for extremists in their country. Thousands of refugees have been harassed and put in jail on minor charges.

Both Aylan Kurdi and Sharbat Gula represent refugees’ struggle for a peaceful life. Their prominence should remind us of the situations facing millions of people desperately fleeing civil wars in any part of the world.

There is a saying in Afghanistan that Pakistan buys you on $1,000 and sells you on $100. Pakistan hosted Afghan refugees for almost three decades. There is no case in which Afghan refugees have been involved in illegal crimes against the state or the people, and most current and former Pakistani government officials have confirmed this fact. Refugees are already returning to Afghanistan, and this is an opportunity for Pakistan to leave a positive image in the eyes of Afghan refugees who have spent three decades there. Such incidents will wash away any positive impressions of Pakistan that remain with Afghans. Afghan special envoy and ambassador to Pakistan Hazrat Omar Zakhilwal has called on Prime Minister Nawaz Sharif to intervene in Sharbat Gula’s case and release her, to win over Afghans who see the controversy as a sign of disrespect. Pakistan’s regional isolation has further worsened its international image.

Pakistan should not only release Sharbat Gula but also treat Afghan refugees living in that country with the dignified respect they deserve, which will help the country enhance its ties with Afghanistan.

Aziz Amin Ahmadzai writes on political, security and social issues in South Asia, West, and Central Asia. He is a Chevening Scholar & is currently studying Conflict, Security & Development at Lancaster University. He tweets at @azizamin786.