Don't Freak Out about Trump's Budget 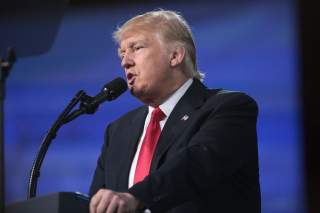 First, let’s get this out in the open: President Donald Trump’s proposed federal budget isn’t going anywhere. It’s going to die as soon as it hits the halls of Congress. It’s DOA, that famous Washington catchphrase that describes a bill, resolution, supplemental, or policy that is about as popular on Capitol Hill as a trip to the dentist.

It’s difficult not to undersell the intense vitriol that many in Washington have towards Trump’s “skinny budget,” mainly because it’s getting assaulted from all directions. Democrats never would have supported the Trump administration’s budget request to begin with, but the across-the-board spending cuts are so steep that even Senate minority leader Chuck Schumer was probably surprised at the extent of the programs that were eliminated and the agencies that were downsized. With the exception of the Departments of Defense, Homeland Security and Veterans Affairs, every department is being primed for the chopping block: Agriculture is cut by 21 percent from FY2016 levels; Education is decreased by 13 percent; the State Department suffers a whopping 28 percent reduction in spending; and the Environmental Protection Agency is practically gutted, with a 31 percent decline. Democrats are incensed that the environment, the National Institutes of Health, research into alternative fuel sources, and initiatives that promote a reduction in greenhouse-gas emissions are sacrificed at the altar to make way for more guns and ammunition for the Pentagon.

Senior Republicans, meanwhile, aren’t particularly happy with the budget proposal either. Sen. John McCain, chairman of the Armed Services Committee, all but labels Trump’s $54 billion increase in defense spending as child’s play to what is actually needed (in his view) to rebuild the military’s inventory, capability and readiness. The unprecedented cuts to the State Department, according to House Foreign Affairs Committee chairman Ed Royce, “will hurt efforts to combat terrorism, distribute critical humanitarian aid, and promote opportunities for American workers.” Congressional Republicans, it seems, are just as upset as congressional Democrats about these budget numbers.

This is all true enough. But what is also true is that President Trump probably understood that his proposal wouldn’t be passed by Congress without amendment or challenge. No administration in its right mind would expect its budget priorities to be accepted on Capitol Hill absent the usual groveling, debate and opposition. And if it did, its members would be naive to the point of stupidity.

The same goes for the syndicated columnists, television personalities and budget analysts who are churning out endless streams of analysis and commentary predicating fiscal calamity. They should know better than anyone that a president’s initial budget proposal in March isn’t a final, definitive document, but rather a political statement at the mercy of congressional appropriators, who have the final say over how the money is allocated, which programs are cut or eliminated, and how many F-35s the U.S. Air Force is authorized to buy. All the hyperventilating and doomsday predictions about America’s character being fundamentally changed for the worst due to this budget are as premature as they are inaccurate. It’s inaccurate because America’s system of government isn’t—fortunately—a monarchy, where the president can wield king-like powers and the rest of us have to suck it up and deal with whatever the supreme leader wants to do.

Is Trump’s budget less than desirable? Of course it is. The State Department deserves more resources to do its job, not fewer—indeed, the less Foggy Bottom’s diplomats are able to do, the more likely it is that U.S. foreign policy will be militarized to an even bigger scale than it already is. The United States should undoubtedly maintain its status as a superpower with the most professional and lethal armed forces in the world, but the country should also ensure that it possesses the most talented negotiators in the world, with the funds, deference and flexibility to make good agreements for America.

But guess what? Trump’s blueprint is the opening shot in a long and drawn-out numbers game that will last for months, involve multiple congressional committees and endless rounds of negotiations between the White House and congressional appropriators—all of which will take place in a political climate where Senate Democrats have the leverage to grind the entire process to a halt if Republicans don’t agree to provide more funds for education, disease research, infrastructure, and every other priority that Chuck Schumer and Nancy Pelosi hold dear.

In short: everybody needs to calm down over Trump’s budget request. The fact of the matter is that we are more likely to see a final budget that looks a lot more like the status quo than what Donald Trump and Mick Mulvaney would prefer.