Don't Gear up for War with Russia 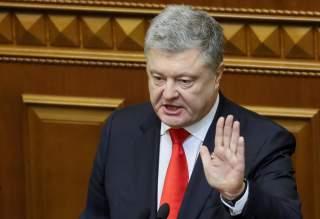 No sooner did news break of Russia’s seizure of three Ukrainian naval ships in the Black Sea than speculation began on how the United States and Western Europe would respond.

President Trump expressed general displeasure, telling reporters Monday his administration is “working on it” with European allies and expressing hope “it’ll get straightened out.” U.S. Ambassador to the United Nations Nikki Haley was more specific, declaring the move an “unlawful” and “outrageous violation of sovereign Ukrainian territory” by Moscow. National security commentators recommended deployment of U.S. and NATO ships to prevent further Russian action while expanding Western military presence in the region more broadly. They also wanted Washington to impose new sanctions and oil embargoes, including upping military aid to Ukraine. In short: gear up for war and cross your fingers Russia will flinch.

This is an understandable but ultimately reckless impulse, especially for the United States. Where European nations—far closer to the scene of the conflict—may feel compelled to mount an aggressive response, the same choices from Washington risk dangerous escalation which will serve no one well. As North Atlantic Treaty Organization (NATO) Secretary-General Jens Stoltenberg warned, “What we saw . . . was very serious. But at the same time, we need to work for de-escalation, for calm and restraint, because we have to avoid this situation becoming out of control.”

It is evident, of course, that Russia is in the wrong here, and the United States need not be shy about saying as much. A 2003 treaty secures Ukraine unfettered access to the Sea of Azov, which borders both nations, through the Kerch Strait, where the seizure occurred. Moscow’s failure to abide by its word puts the United States on Ukraine’s side at any shared negotiating table.

But to say Ukraine has been wronged is not to say it is necessary or prudent for the United States to helm a military-focused response. It is no exaggeration to say a reaction which does not prioritize diplomacy and restraint risks moving America, however unwitting, toward a new Cold War—or, dread the thought, a rather warmer conflict.

Ramping up American military presence in the Black Sea, Ukraine, and nearby waters and territories is no certain route to Russian retreat. If anything, observing the past few years of Russian behavior toward Ukraine suggests Moscow is determined to maintain its support of anti-Kiev forces in the face of opposition. Adding more American arms—and putting U.S. troops in position for direct naval conflict with Russia—does not guarantee the Kremlin will back down. What it would do is worsen U.S.-Russian relations, with potentially grim consequences it is in America’s interest to avoid.

And the question of U.S. interests is crucial here because this is a conflict of vital interest to Ukraine and, in the Kremlin’s view, Russia. But it is arguably a peripheral concern for the United States. To recognize what Russia has done is wrong is not to recognize an American responsibility to try to “fix” it. “Picking a fight with a declining nuclear power over Ukraine is the exact opposite of wise;” notes Daniel DePetris at DefenseOne, “remember, Ukraine is not an ally. Russia has so much more at stake in the outcome than America, so the former will always be more willing to make the necessary sacrifices to achieve its desired political end state.”

That mismatch of stakes is what makes the hope that Moscow will back down from a show of American military might so dangerous: There’s a real chance there will be no flinch. Even apparent short-term success may lay the groundwork for great power conflict by further accustoming Washington to viewing military action as an all-purpose tool of foreign affairs. Fortunately, America’s toolbox is rather larger, and it need not be applied to each and every problem abroad. In this case, the wiser course is a condemnation of Moscow’s malfeasance, diplomatic engagement if appropriate, and care to avoid exacerbating conflict with another nuclear state.

Bonnie Kristian is a fellow at Defense Priorities and weekend editor at The Week. Her writing has also appeared at Time Magazine, CNN, Politico, USA Today, the Los Angeles Times, Relevant Magazine, The Hill, and The American Conservative, among other outlets.