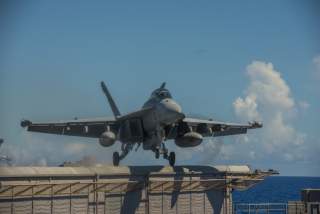 With the prospects of a transition of power next year, the punditry is once again shifting into high gear with alarmist messages about the risk of renewed tensions in the Taiwan Strait. As always, it is the Taiwanese side—not only the Democratic Progressive Party (DPP) but also the millions of Taiwanese who want to maintain their way of life—that is being blamed for the potential risks, not the bully on the other side who is aiming his canons at the island.

What is even more extraordinary about this lopsided logic is that its adherents do recognize the extraordinary accomplishments that have been made by Taiwan over the decades. And yet they still find it within themselves to propose policies that are as defeatist as they are bereft of human decency—or logic, for that matter, as we shall see.

One of the high priests of the abandonment strategy is Hugh White, professor of strategic studies at the Australian National University in Canberra. Every once in a while, White regurgitates that point in op-eds and speeches (he tiptoed around the issue during a talk in Taipei last year, which I attended).

The gist of his idea is that China’s national power has become such that Taiwan cannot hope to resist it and the international community, the United States included, will not intervene on its behalf, lest doing so spark a major conflagration in the Asia-Pacific and hurt their economies.

In an op-ed, titled “The harsh reality that Taiwan faces” published in the Straits Times on April 15, White spells it all out. “Taiwan and its friends and admirers everywhere have to think very carefully about how to handle the dangerous period that lies ahead and to consider what is ultimately in the best interest of the Taiwanese people, as well as the rest of us.”

“The conclusions,” he writes, “will be uncomfortable, but inescapable.” In other words, White argues that Taiwan’s capitulation, and abandonment by the international community, is the only option.

The problem with White’s über-Realist position is that it rests on a series of false assumptions about China. To be fair to White, he doesn’t get it all wrong. He correctly identifies Beijing’s impatience under Xi Jinping and is almost certainly right when he says that a future DPP or Chinese Nationalist Party (KMT) leader would not “return to policies as provocative to China as those of Mr. Lee or Mr. Chen”—referring to former presidents Lee Teng-hui and Chen Shui-bian—but that he or she would likely be more assertive than President Ma Ying-jeou, whose policy over the past seven years has primarily been to bend over backwards to please Beijing. (The so-called greater assertiveness of the future leader will be nothing more than a reflection of popular expectations in democratic Taiwan.)

However, White fails in his prescriptions, however laudable his intention to avoid major escalations may be. He writes:

No one visiting Taipei can fail to be impressed by what the Taiwanese have achieved in recent decades, not just economically but also politically, socially and culturally. But the harsh reality is that no country is going to sacrifice its relations with China in order to help Taiwan preserve the status quo. China is simply too important economically, and too powerful militarily, for anyone to confront it on Taiwan’s behalf, especially when everyone knows how determined China is to achieve reunification eventually.

The argument that a regional hegemon has become so powerful that smaller parties shouldn’t resist it and are undeserving of international support is a recipe for disaster, as it presages a return to an international relations system that led to two world wars.

We all know what good it did the world when the great powers left Czechoslovakia to fend for itself against Nazi Germany. The idea here isn’t to compare Beijing to Berlin under Hitler, but simply to point out the internal logic and dynamics of expansionism, and how appeasement isn’t the best answer to it.

Giving Taiwan away (as if it were the international community’s to give away to start with) would be akin to a sacrificial ceremony to appease an angry god. The problem is that doing so would likely be interpreted by Beijing as a sign of weakness, which almost certainly would fan the flames of Chinese expansionism rather than extinguish them. In fact, the annexation of Taiwan would further contribute to China’s might by adding the world’s 19th largest economy to its national power while providing Beijing with an “unsinkable carrier” facing an open Western Pacific. In this sense, it would provide China with a new front from which to confront Japan and the Philippines, not to mention U.S. forces deployed in the region.

Arguing for the preservation of Taiwan isn’t simply a symptom of wishful thinking by naïve liberals who want to save a democracy against authoritarianism; the Realists’ point that it should be bargained away can be met on similar terms. Abandoning Taiwan would likely encourage Chinese expansionism while giving it more tools to do so. In other words, the tradeoff, rather than ease tensions, would risk much greater instability in future.

Another problem with White’s argument is that it relies on the belief that the U.S. and its allies are a spent force. While it is true that Washington faces great challenges, this is a refrain that we have heard time and again over the past three quarters of a century, perhaps most emphatically in the months following the Vietnam War, which concluded 40 years ago this week. How often did we hear that the United States was “falling behind” the Soviet Union, or that it had no will to fight and was about to abandon its allies in Europe and Asia? If we can learn one thing from history, it is that the United States has been there before, and that it has a tendency to bounce back.

In the present scenario, we should also not discount Tokyo’s ability and desire to ensure that Taiwan doesn’t fall into China’s hands. As a pillar of the U.S. security architecture in the Asia-Pacific, Japan is unlikely to sit by idly as its next-door neighbor is taken over by China.

Yet another flaw in White’s worldview is his depiction of Beijing as an unbeatable opponent. He writes:

the stark reality is that these days, there is not much the US can realistically do to help Taipei stand up to serious pressure from Beijing.

Back in 1996 when they last went toe-to-toe over Taiwan, the US could simply send a couple of aircraft carriers into the area to force China to back off. Today the balance of power is vastly different: China can sink the carriers, and their economies are so intertwined that trade sanctions of the kind the US used against Russia recently are simply unthinkable.

Any US effort to support Taiwan militarily against China would be almost certain to escalate into a full-scale US-China war and quite possibly a nuclear exchange. That would be a disaster for everyone, including, of course, the people of Taiwan itself—far worse than reunification, in fact.

Not only is this defeatism, it treats China as if it did not rely just as heavily on the world economy for its own prosperity. It also assumes that the untested Chinese military would prevail in any scenario and would even risk nuclear annihilation for the sake of seizing Taiwan, which arguably misreads the intentions (and pragmatism) of the Chinese leadership, whose main strategy is to achieve exactly what White counsels in his article—to win the war against Taiwan without a fight, to have it handed over on a silver platter.

For all its might, China isn’t above the sting of sanctions or embarrassing defeats in wartime, given that the People’s Liberation Army (PLA) hasn’t had actual combat experience since 1979 when it ventured into Vietnam and got a bloody nose for its troubles.

The defense of Taiwan along moral lines is a perfectly sensible position to take, and as White himself seems to imply, it would be very sad indeed if this successful experiment in democratization in Asia were to fail because larger forces held different ideas regarding its future. Luckily for Taiwan, the virtues and defensibility of its democracy aren’t the only arguments in its favor. In the Realists’ playbook, there is every reason for making sure that Taiwan does not fall under Beijing’s—and PLA—control.