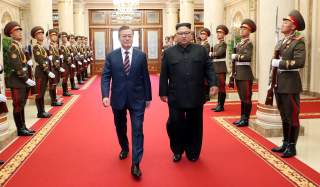 Last month, the leaders of North and South Korea held their third inter-Korean summit in Pyongyang. This month, Secretary of State Mike Pompeo will visit Pyongyang, raising the prospects of a second Trump-Kim summit. The resumption of diplomacy is a significant turnabout from last year’s escalation of tensions. Less than twelve months ago there was widespread concern about a nuclear war; today the two Koreas are taking steps to increase military confidence measures, defuse tensions in the disputed West Sea area, and pursue other joint initiatives that show a willingness to consider a path forward in creating a more stable peace on the peninsula.

The ball is once again in Washington’s court. Despite the shift towards engagement, a wide range of U.S. policy analysts remain deeply skeptical about the entire process in general, and denuclearization in particular. As Pyongyang and Seoul take steps towards bringing peace and stability on the Korean Peninsula, the foreign-policy establishment in Washington remains unconvinced. Pyongyang’s recent declaration to destroy a missile test site under the presence of international observers, and the conditional offer to permanently dismantle nuclear facilities in Yongbyon—are seen as incomplete at best. This is in addition to other measures taken by North Koreans, including a curtailment of anti-U.S. propaganda, the return of the remains of fifty-five U.S. soldiers from the Korean War, and the cessation of missile and nuclear tests the past eleven months. These measures have failed to convince most experts in Washington that Pyongyang is ready to enter into good faith negotiations. North Korea’s turn towards engagement is instead suspected as a ploy to undermine the U.S.-South Korea alliance and gain tacit acceptance into the nuclear club.Will anything persuade the skeptics that now may be the best chance in a decade to

advance confidence-building measures, stability, and peace on the Korean Peninsula? What explains the persistent skepticism in Washington despite different signals form Pyongyang? We offer three reasons.

First, nobody likes to be played a fool twice (or three times or four times). North Koreans have agreed to denuclearization on multiple occasions following negotiations with the United States and other countries over the past three decades. However, North Korea has continued to march down the nuclear path. In Washington, the idea that North Koreans make unreliable partners has become axiomatic. If past performance is any indicator of future behavior, than policymakers have reason to be skeptical of the regime’s commitment to peace and denuclearization. The history of U.S.-DPRK negotiations has hardened policymakers to the point that skepticism has become the default approach to North Korean negotiations.

Second, the cost of being wrong as a skeptic is lower. If experts appear hard-nosed and skeptical in their assessment, arguing that North Koreans are unlikely to give up nuclear weapons, but turn out to be wrong, the policy community can forgive and forget since the world is in a safer place. The costs and consequences in making an overly cautious—but ultimately erroneous assessment—is low. In contrast, policy experts (and policymakers) face higher risks and consequences by pursuing engagement and accepting conciliatory gestures from North Korea as credible. If an expert incorrectly assesses North Korean intentions as benign and advocates engagement, thereby enabling North Korean nuclear development, the expert will not only be blamed for being wrong, but also be held responsible for any catastrophic outcome (i.e. a North Korean nuclear attack on Washington).

Third, it’s (still) a realist world. Pessimists are never accused of being naïve, no matter how wrong they are. The realist school of thought in international relations remains dominant in the academy and the halls of government. Policymakers in Washington—even those with liberal stripes—have generally adopted a realist framework towards foreign policy. Realism prescribes that states must act with prudence and caution, look after their national interests, and maintain security by way of accumulating power. In an anarchic world, states can never fully be trusted. Turning to North Korea, from the vantage of realism, the engagement perspective on North Korea appears naïve and idealistic. Classic realist thinkers such as E. H. Carr and Hans Morgenthau brandished idealism as dangerous, leading states to the path of ruin. In “remembering Munich,” we avoid the missteps of Britain’s Prime Minister Neville Chamberlain by refusing to appease the ambitions of the tyrannical Kim regime.

We are not naïve when it comes to dealing with a nuclear North Korea. If the United States has learned anything from decades of negotiations with Pyongyang, North Korea is a tough nut to crack (one of us has released a new edition to a book on this very subject). We are fully aware of the horrific atrocities committed by the North Korean regime (one of us published a new book on North Korean human-rights activism). We, too, harbor doubts as to whether North Korea ever intends to fully denuclearize, and are cognizant of intelligence reports indicating ongoing nuclear and missile development and sanctions violations, even as diplomatic engagement moves forward. Yes, the North Koreans never should have possessed nuclear weapons or wrongfully imprisoned Americans in the first place. Yes, North Korea repeatedly violated international laws. Yes, the North Koreans may cheat again. No, we do not like rewarding bad behavior.

However, the only way to find out how serious North Korea is about denuclearization or to enable a peace process on the Korean Peninsula is for the United States to actually talk to North Korea and provide actions that demonstrate greater credible commitment. President Moon Jae-in has teed the ball for Washington. The White House is taking a swing at resuming negotiations with North Korea. The real test, however, is whether the United States makes some “corresponding measures,” which both President Moon and Chairman Kim Jong-un hope to see from President Donald Trump. Whether this comes in the form of a declaration to end the Korean War, or some rollback of sanctions—at least enough to permit inter-Korea reconciliation to move forward—is up for the negotiators of the two parties to decide. But if peace and stability on the Korean Peninsula is the first path to denuclearization, is it not worth offering a concession in return to play ball?

In sum, skepticism in Washington, DC exists for many reasons—but given where we are today, and where we were a year ago, the moves towards détente on the peninsula are important and worth pursuing.

David C. Kang is Maria Crutcher Professor of International Relations at the University of Southern California, where he also directs the USC Korean Studies Institute. His most recent books include (with Victor Cha) A Nuclear North Korea: A Debate on Engagement Strategies, and American Grand Strategy and East Asian Security in the 21st Century.