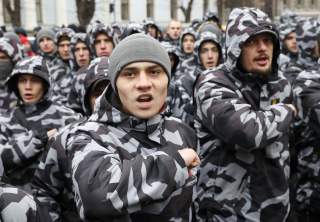 Ukraine’s behavior in the Kerch Strait is another example of a U.S. ally (or security dependent) trying to gain American military backing for its own parochial agenda. Georgia sought to do that in 2008 regarding its territorial dispute with Russia over two secessionist regions, Abkhazia and South Ossetia. A European Union-sponsored report subsequently concluded that Georgia started the fighting that broke out in August of that year. And there is little doubt that Georgian President Mikheil Saakashvili expected to get much stronger support from the United States and NATO than he ultimately received.

There are other examples of such self-serving behavior. Saudi Arabia routinely attempts to entangle the United States in Riyadh’s regional power struggle with Tehran. Washington’s shameful support for the Saudi-led military intervention in Yemen suggests that the effort has not been in vain.

U.S. leaders need to be far more alert to such maneuvers and take steps to make certain that the American republic does not become entangled in conflicts that have little or no connection to important American interests. Too often, members of this country’s political, policy, and media elites act as though the interests and ambitions of an ally or “friend” are congruent with the best interests of the American people. That notion is not only erroneous but dangerous.

Ukrainian President Petro Poroshenko’s conduct before, during, and after the November Kerch Strait incident, should trouble all thoughtful Americans. Three Ukrainian naval vessels sought to transit the strait—a narrow waterway between Russia’s Taman Peninsula and Crimea—that connects the Black Sea and the Sea of Azov. Kiev considers the strait international waters and points to a 2003 bilateral navigation treaty with Russia to vindicate its position. However, after Russia seized Crimea from Ukraine and annexed that territory in 2014, Moscow now treats the strait as Russian territorial waters. It insists on forty-eight hours notice and explicit Russian approval before Ukrainian ships can use the strait.

Ukraine had complied with that requirement a few months earlier, but in late November declined to do so and attempted to carry out an unapproved crossing. Russian security forces rammed a Ukrainian tug, fired on the two other ships (wounding several sailors) and then seized all three vessels.

The motive for Kiev’s challenge was murky and the timing extremely suspicious. Poroshenko faces a tough reelection campaign in Ukraine’s presidential election at the end of March. Polls showed him languishing in a crowded field, lagging far behind the leading candidate, former Prime Minister Yulia Tymoshenko, and sometimes registering in the single digits. Indeed, it was doubtful that he would be one of the top two vote-getters who would qualify for an almost certain runoff round.

Thus, Poroshenko had ample political reasons for wanting a crisis. And he quickly exploited the Kerch Strait clash to stoke nationalist fervor and create a “rally around the flag” effect. Not only did he appear in public in full military attire, but he imposed martial law on ten regions near the border with Russia—regions that were among the least supportive of his presidency. Furthermore, one provision of that proclamation also banned any demonstrations for the next 30 days.

Far worse than such domestic maneuvers, though, Poroshenko sought the North Atlantic Treaty Organization’s (NATO) military backing. He called on the Alliance to send warships to the Sea of Azov. Such a step in defiance of Moscow’s wishes would be extremely dangerous. It would constitute an armed intrusion into Russia’s core security zone, and it would likely lead to war. Even deploying more NATO ships to the eastern portion of the Black Sea would be a major provocation.

Yet, incredibly, some American leaders seem receptive to such a course. Senate Armed Services Committee Chairman James Inhofe (R-OK) called for a coordinated response between the United States and its European allies, including “inserting a greater U.S. and NATO presence in the Black Sea region and increasing military assistance for Ukraine.” Senator Robert Menendez (D-NJ) echoed those views. Menendez called for additional NATO exercises on the Black Sea and more U.S. security aid to Ukraine, “including lethal maritime equipment and weapons.”

Washington’s security ties to Kiev were already growing to an unhealthy degree, exemplified by the Trump administration’s approval of two arms sales, long before the Kerch Strait episode. The administration seemed poised to approve yet another arms deal. American and Ukrainian officials were in “close discussion” for Washington to supply another tranche of powerful weapons for Kiev’s fight against Russian-backed secessionist rebels in eastern Ukraine. For instance, Ukrainian Foreign Minister Pavlo Klimkin told reporters this on November 18 after he met with U.S. Secretary of State Mike Pompeo. His announcement also took place barely a week before the clash in the Kerch Strait.

Even more worrisome, a strong lobbying effort in favor of admitting Ukraine to NATO keeps surfacing, and successive American administrations have refused to abandon that goal. Under Article 5 of the North Atlantic Treaty, giving Kiev NATO membership would obligate the United States to come to Ukraine’s defense in the event of war with an outside power. Given Ukraine’s strategic importance to Russia, that is a commitment Washington should never undertake.

These various developments indicate that the United States is drifting toward a perilous confrontational policy toward Russia on Ukraine’s behalf. The status of the Kerch Strait or even the broader controversy about Crimea’s status can and should be a matter of indifference to America. It is hard to see how risking a major war with Russia benefits even Ukraine (although some Ukrainian nationalists apparently to think that it would), but it is impossible to see how such a course benefits the United States. The Trump administration needs to put far greater distance between U.S. and Ukrainian policies, not close that distance. Americans must not let the Ukrainian tail wag the American dog, or the result could be tragic for all concerned.