Don't Listen to John Bolton: War Is Not a Solution 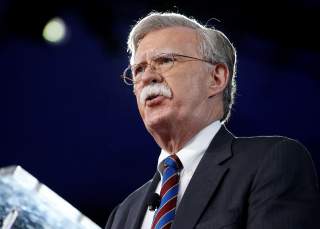 Last Friday, President Donald Trump addressed the American people and announced his decision to decertify the Iranian nuclear agreement formally known as the Joint Comprehensive Plan of Action (JCPOA). And after that decision was made, John Bolton wasted no time applauding the president’s move as the beginning of a course correction on Iran policy.

The former U.S. Ambassador to the United Nations hasn’t been a part of the U.S. government for a decade, but he still enjoys a high-profile, seniority-like status in Washington as a strategic thinker and a “go-to” adviser for Republicans trying to make a name for themselves in the capital city. His face is plastered on cable television pretty much every single day of the week, waxing poetically about every international security crisis under the sun. Bolton is a smart guy; he’s got a couple of degrees from Yale University, was a lawyer at the distinguished law firm of Covington & Burling and headed up public policy research for the American Enterprise Institute. And of course, Bolton had a long career in the U.S. government before being a pundit, having served in the Justice Department in the Reagan administration and in the State Department during both Bush administrations. Bolton was even under consideration for a multitude of jobs in the Trump administration; Sen. Ted Cruz recommended him for national security adviser, while Trump put him on the list as a possible secretary of state.

Why then should we ignore what John Bolton says about Iran and North Korea on TV and what he writes in the newspapers? Because despite all of this extensive experience in Washington over the last thirty years, he has gotten the biggest foreign policy questions wrong. When he does offer recommendations, they typically entail blunt force trauma to the head of another country’s government. His solution to problems like Iran’s nuclear program and North Korea’s development of nuclear weapons and ballistic missiles is, in effect, to bomb the crap out of both countries. Diplomacy, the traditional way of conducting business in international politics, is for weaklings and appeasers (a term the user-hawk, neoconservative crowd uses so often that it has lost its meaning). Indeed, there is no diplomatic agreement too big to fail and no nuclear arms reduction treaty too sacrosanct for Bolton to eviscerate.

The New START treaty with the Russians, one of the Obama administration’s first major foreign policy dealings, was the culmination of months upon months of haggling between U.S. and Russian diplomats, and was pushed across the finish line in large part due to the personal investment of both Presidents Barack Obama and Dmitri Medvedev—two leaders who wanted to reduce the role of nuclear weapons in one another’s defense policy. The agreement wasn’t perfect by any means; Senate Republicans, led by then Minority Leader Jon Kyl and Sen. John McCain, had a number of concerns with the verification procedures and were alarmed that any arms reduction treaty could adversely impact America’s missile defense development. But the accord, warts and all, nonetheless compelled both the U.S. and Russia—the world’s two largest nuclear weapons states—to cut their nuclear stockpiles by a third.

To Bolton, however, it was a terrible mistake for the Obama administration to rush into a nonproliferation agreement that would decrease the U.S. nuclear weapons stockpile to such a low figure. Apparently, 1,550 strategic warheads atop seven hundred launchers is not enough nuclear power for the U.S. to defend itself and its allies in Europe. Fortunately, Bolton’s advice was discarded. As nonproliferation expert and former U.S. Ambassador Steven Pifer observed on the the agreement's fifth anniversary, New START has been and remains the one bright spot in U.S.-Russia relations today.

Bolton’s “the hell with diplomacy” mindset expands to North Korea as well, the most urgent nuclear proliferation crisis the United States and its Asian allies face today. Anyone who is looking realistically at the North Korean nuclear problem understands that Washington’s options are between bad, very bad, and disastrously bad. Any U.S. military action on the Korean Peninsula in any capacity, even a targeted airstrike on a specific nuclear facility, is likely to spiral into the worst armed conflict the world has laid its eyes on this century. Nobody, not Kim Jong-un, not the United States, not Japan, not China and definitely not Europe, is eager for a war that would claim the lives tens of thousands of civilians on a lucky day.

A change of government in Pyongyang—either assassinating Kim Jong-un with a missile or encouraging an internal coup that would force the Kim bloodline into exile—is not exactly an operation that guarantees a stable outcome. Washington, after all, thought removing Saddam Hussein would be the catalyst for a positive, more peaceful, orderly and democratic wave that would sweep through the Middle East. Those optimistic—and in hindsight, foolish—predictions obviously didn’t pan out so well. To think regime change would be any more successful in Pyongyang as it was in Baghdad is somewhere between delusional and historically ignorant.

And yet Bolton, through his television segments and his op-ed’s, has called for both. Sitting down and attempting to come up with a verifiable diplomatic arrangement with the North Koreans is a waste of precious time and resources, Bolton asserts, a course of action that would expose a complete misunderstanding of how much the Kim regime values its nuclear weapons. Why even try? “The only diplomatic option left is to end the North Korean regime by effectively having the South take it over,” Bolton told Fox News. If forced reunification on the Korean Peninsula fails? Well, Washington could always order the B-1B bombers from Guam to take off and drop their ordnance on Pyongyang in a preemptive strike. Sure, the civilian casualties would be massive, Seoul would look like Stalingrad in 1943, and North Korea could send a few nuclear-armed short-range missiles across the East Sea towards Japan, but at least the U.S. would be teaching Kim a lesson.

There are a lot of former U.S. ambassadors and ex-government officials on television offering up their perceived wisdom, so why should we care about what Bolton thinks?

There are two main reasons. For one, despite Bolton’s numerous misappraisals in the past, he still wields some influence with the current administration. He has discussed foreign policy with President Trump over the phone and during in-person meetings on White House grounds as if he were a younger version of Henry Kissinger. Bolton’s recent complaints about access to the president notwithstanding, he still retains channels of communication with the administration.

Secondly, and most importantly, we should care because John Bolton is feverishly campaigning to persuade President Trump to go one step further from decertifying the JCPOA towards outright destroying it. The JCPOA, it should be said, is the agreement that the International Atomic Energy Agency, the European Union, the U.S. intelligence community, the secretary of defense, the secretary of state, the Joint Chiefs of Staff, and the commander of U.S. Strategic Command have all assessed publicly is preventing Iran from reaching breakout nuclear status; is maintaining international eyes on Tehran’s nuclear supply chain; and is crafted in such a way that the U.S. could unilaterally reimpose UN Security Council sanctions on Iran if it engages in a material breach of its obligations. John Bolton is in an entirely different universe from each and every one of these public servants, arguing regardless of the facts that keeping the U.S. as a party to the deal is bad for America’s national security.

So the next time you turn on Fox News and see the ambassador counseling what President Trump should and should not do, it might be good for your health if you changed the channel.