Don’t Mess With Trump in Texas 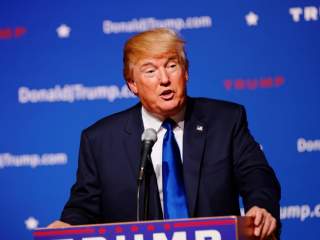 A psychologist watching the Republican establishment over the last week might recall Elisabeth Kübler-Ross’s famous Five Stages of Grief. After months of denial that a Donald Trump victory was possible and then, after he began winning, bargaining with reality, embracing every outlier poll that put his rivals in spitting distance and every campaign consultant offering some new labyrinthine path to victory, the elite is now split on which of the three final stages to move to next.

There is the anger crowd, railing at party donors and candidates afraid to take on Trump or evangelical voters who have flocked to the thrice-married casino mogul. There are depressives, too, talking about moving to Australia (Canada having abandoned the resolute rightist Stephen Harper for liberal ninnymuggins Justin Trudeau) or hoping for an asteroid to end civilization (and yes, there’s campaign swag for that). And there are those who accept the real possibility that Trump will win the nomination and who are ready to line up behind him in the general election. (A few in the party’s neoconservative wing are talking of switching to Hillary Clinton, instead, suggesting that Kübler-Ross missed a stage: betrayal.)

The party elites are now bitterly feuding over the right way forward. Should Ted Cruz stay in to draw votes away from Trump, or should he get out to clarify the field? Should Marco Rubio attack the Donald directly, or try to force Cruz out of the race first? Is it “Time for an Anti-Trump Manhattan Project”? The latter faction has been backed in its assault on the frontrunner by the press, which has offered up new investigations into Trump’s business record and media appearances alongside critical editorials and unfriendly op-eds from Republican grandees. (Surely Trump’s voters will have second thoughts when they learn the Wall Street Journal editorial board is against their man.)

This was the setting that saw the five remaining candidates take the stage Thursday night in Houston, Texas. Ben Carson and John Kasich, who are still running for president, were pleasant distractions from an otherwise combative evening. Kasich, whom moderator Wolf Blitzer praised for “waiting patiently” to be called on, did his best impersonation of a motivational speaker. Carson offered up zany phrases—“our nation is heading off the abyss of destruction,” evaluate judicial nominees by “the fruit salad of their life”—and unusual policy proposals, like a bid to solve illegal immigration through foreign aid.

But the real focus of the evening was on Trump, who faced one of his first nights of sustained, direct attacks from rivals who once had treated him as someone to be humored, ignored or explained away. Marco Rubio, alluding to the businessman, opened with an argument that the GOP faced a defining choice between being the party of an optimistic conservative movement and “a party that preys on people’s angers and fears.” Cruz tried to turn Trump’s reputation as a negotiator on its head, suggesting that the man who wrote The Art of the Deal would cut deals with the Democrats.

A sharp confrontation over immigration set the tone for the rest of the night, with Rubio attacking Trump over a New York Times article that claimed the real estate mogul had hired only a handful of Americans for his Mar-a-Lago resort in Florida, preferring to bring in Romanian workers on visas. Yet while Rubio’s words were pointed, his body language was feeble—he would not look directly at Trump while attacking him, instead staring at a point on the floor somewhere beyond the frontrunner. And when Trump counterattacked, Rubio tried to shout over him, made faces or petulantly looked over at the moderators. It was a similar story with Cruz. The more aggressive approach from the two senators was clearly intended to draw Trump out, but it seemed to play into his hand: while Trump has certainly been guilty of talking over people and making faces (a famous GIF from an early debate shows him pulling at least four unique expressions in only a few seconds), he’s always charged straight at his opponents, while they’ve seemed to fear landing a punch. It feeds Trump’s narrative that he’s a fearless straight shooter, and his opponents are slippery equivocators.

All this means many party panjandrums will be spiking their coffee with strychnine on Friday morning. Ignoring Trump didn’t work, but attacking him isn’t working either. Meanwhile, new polls show Rubio, their last hope, losing the winner-take-all primary in his home state of Florida to the Man from Mar-a-Lago. Trump is talking about “building a new Republican Party . . . much bigger, much stronger.” It’s not clear they want to be around to see how that turns out.

John Allen Gay, an associate managing editor at the National Interest, is coauthor of War with Iran: Political, Military, and Economic Consequences. He tweets at @JohnAllenGay.