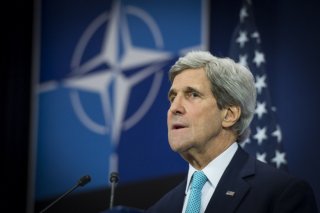 A leitmotif of much reporting and commentary about U.S. foreign relations in recent months has been that U.S. allies are worried about the strength of U.S. commitments and the ability and willingness of the United States to stay active and engaged in their regions. Allies are said to be hungry for reassurances from Washington about this subject. This was a major theme of analysis anticipating President Obama's trip to the Far East. A similar theme has infused much commentary about the Middle East, especially with reference to Saudi Arabia and other Persian Gulf Arab states. Reassurance of allies within NATO has become a topic of concern in connection with the standoff with Russia over Ukraine.

One reason we are hearing so much of this sort of thing is that it flows from another leitmotif, that of American “retreat” from the world. The latter idea partly reflects that we are in a period of winding down extensive overseas military commitments, and of the American public not being in a mood to wind military commitments back up. It also partly reflects political incentives in some quarters to portray Mr. Obama as weak (at least as far as foreign policy is concerned), and for that reason alone we ought to be skeptical of the retreat theme and the theme about worried allies that is connected to it.

Nonetheless there actually have been many expressions of worry along this line from people associated with governments generally considered U.S. allies. The question to consider is how much of such professed allied disquietude ought to worry us. The answer is that most of it shouldn't.

Alliances are important tools of U.S. foreign policy.  They are force multipliers that help the United States to advance and protect its interests without trying to do everything itself.

It also certainly behooves us to listen to the perspectives of allies and to think carefully about what they have to say. To do so will make us less likely to get into trouble than by practicing lone ranger unilateralism. Twelve years ago we would have been well served by paying more attention to what our allies in parts of Old Europe were saying rather than by showing displeasure with them by renaming deep-fried sticks of potatoes.

It is worthwhile for the United States to nurture alliances, and even to coddle allies, insofar as an alliance ultimately serves the interests of the United States, not necessarily those of the ally. That near-tautology ought to be so obvious as not to require pointing out, but it is what is forgotten amid our worrying about allies' worrying. A narrow focus on whatever an ally happens to be complaining about also causes us to lose sight of the balance of contributions to an alliance and who has most been helping whom. Clyde Prestowitz has nicely summed up the situation regarding the United States and some of its East Asian allies the president just visited:

At first glance, both the Asian complaints and the new American response seem logical and straightforward. In fact, they are totally backwards. Listening to the Asians, you would never know that the US Seventh Fleet has been stationed in Yokosuka, Japan, and tasked with patrolling the western Pacific for the past 69 years; or that there are 30,000 American troops stationed in South Korea and another 50,000 in Japan; or that the South Korean army is under US command in time of war; or that America is committed to the unilateral defense of Japan and South Korea under its mutual security treaties with them. That means America is committed to defend Japan and South Korea if they are attacked but those nations are not committed in any way to defend America if it is attacked.

One might add that with the Philippines, the United States not only has made a disproportionate share of the contributions but also has been jerked around by the Filipinos as their mood has changed. It wasn't that long ago that Americans were no longer welcome at Subic Bay; after new thinking in the Philippines about China and after the U.S. military furnished the most effective relief of any foreign friend following a devastating typhoon, now the Filipinos say they would like to see more rather than less of the Americans.

When the United States and the Philippines inked a new agreement during the president's visit that will give U.S. forces increased access to Filipino bases, the U.S. National Security Council senior director for Asia said, “We're not doing this because of China. We're doing this because we have a longstanding alliance partner.” One can understand why a U.S. official, in order not to be provocative, would couch a public statement that way. But actually we are making this new agreement because of China, and the mere fact of having a longstanding alliance partner is an insufficient reason for making it.

Deterrence of a possible common adversary is one way an alliance can support U.S. interests. Other ways include more direct benefit to U.S. operations (as appears to be true of the new agreement with the Philippines), back-scratching arrangements in which the United States gets some other quid pro quo in return for its support, or facilitation of cooperation on other matters on which the allies share an interest. An alliance does not do the United States any good merely by easing an ally's worries. The United States is no one's mother or therapist.

It especially does not help the United States to ease an ally's worries when those worries involve matters on which the United States and the ally do not share an interest and on which their interests may even conflict. This is the case with most of Saudi Arabia's current dyspepsia. Much of the unease of the theocratic Saudi regime, focused on Syria in particular, has to do with the Saudis having a sectarian stake in conflicts in which Sunnis are battling Alawites or Shia; the United States has no such stake whatsoever and can only be ill-served by appearing to take sides in sectarian conflicts. Saudi unease about negotiations with Iran has to do with a post-agreement Iran becoming a stronger competitor to other oil exporters and giving the United States greater diplomatic and security options in the Persian Gulf region than it does now; again, U.S. interests on these subjects are quite different from those of the Saudis.

A dyspeptic ally can respond in ways that hurt the United States only if the ally: (1) withholds some quid pro quo in which the ally has no direct interest but that has benefited the United States; (2) becomes so disturbed that the ally does something really disruptive and destructive; or (3) junks the alliance and turns for support to an adversary of the United States. Looking around at the U.S. allies that have been the most conspicuous worry warts, it is hard to imagine any of these things happening. The end of the Cold War ended #3 as an option for most countries that otherwise might have contemplated it. Possible actions under #2 would be contrary to the ally's own interests, whether or not it has an alliance with the United States. And it is hard to see what the United States is getting from most of these relationships that would come under #1. With some Middle Eastern “allies” of the United States, a conspicuously close relationship is more likely a net detriment to U.S. interests than a net positive.

The next time an ally whines about how the United States is not providing it a sufficient level of comfort, we should, following Prestowitz's advice, turn the conversation around by asking what the ally is doing for the benefit of the United States.