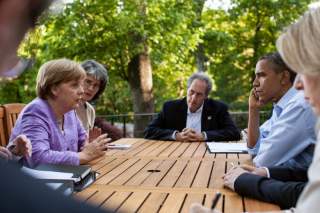 The question in Germany isn’t so much what the United States has been spying on. The real question is why it has felt compelled to gather what appears to amount to trivial information. “So much idiocy and stupidity can only make you cry,” said German finance minister Wolfgang Schauble. If so, there must be a lot of weeping going on in Chancellor Angela Merkel’s government. Schauble, who has served at the highest levels of government for several decades, is a staunch Atlanticist. But it’s increasingly clear that the Obama administration is either oblivious to the dangers it’s running in antagonizing Berlin or it’s unable to control the intelligence agencies who are running amok--Merkel demanded the expulsion of the CIA station chief at the America embassy on Thursday, a move that she had to take to placate mounting outrage among the German public.

Either way, President Obama has a crisis on his hands. But it’s one he does not appear to be addressing. Instead, the administration and CIA director John Brennan are stonewalling both Congress and Germany.

A top German intelligence official told the German parliamentary committee that oversees intelligence services that a call from Mr. Brennan earlier this week shed little light on the current investigations, according to people present at his briefing. The official said Mr. Brennan offered little but platitudes about the value of the trans-Atlantic alliance and expressed frustration about the bad press, according to the account.

This won’t do. The National Security Agency apparently has at least 150 listening sites in Germany. U.S. intelligence services have also been trying to suborn German officials to turn over secret documents, including, apparently, the results of an investigation into NSA spying itself in Germany.

Ever since Edward Snowden decamped to Moscow, floods of documents that he’s released have indicated that Germany is a prime target of American espionage. The weekly Der Spiegel referred to the American embassy in Berlin as a “nest of spies.” The rooftop of the embassy seems to have been converted into a listening post. Yes, spying goes on all the time between nations. Germans spy as well. But it’s the sheer extent of American efforts that’s causing Germans to rub their eyes in disbelief. They have the feeling that they remain a nation under suspicion. The spying is prompting Germans, already wary of what they regard as American militarism, to reassess the value of ties to America. As I note in the Los Angeles Times today, they tend to see the U.S. as a rogue state that poses more of a threat to global security than either Russia or Iran.

The roots of this antipathy to the U.S. rest in what a number of Germans see as the vassal-like status they have occupied toward the U.S. since end of World War II. They want to see Germany strike out a more independent course that returns to the older precepts of foreign policy in which Berlin was an honest broker, steering between East and West and pursuing its own interests. Why get entangled in America’s conflicts? Most recently, many Germans feared that they would become ensnared in a military conflict between Washington and Moscow over the Ukraine.

The German political class remains friendlier to the U.S. But it cannot remain deaf to the complaints of the electorate, which is why the pervasive spying on Germany is boomeranging on the U.S. This isn’t just about political interests. It’s about national pride.

So far there’s been little sign that Obama comprehends the peril. As though he didn’t have enough foreign policy problems on his plate, he’s now jeopardizing America’s relationship with one of its closest allies. The only country that is benefitting from the ructions between Germany and the U.S. is Russia.

Nor is this all. It’s hard to avoid the suspicion that Obama may not be in control of the intelligence agencies. When Obama spoke with Merkel over a week ago, he apparently had not been told by the CIA that the Germans had nabbed an American spy working for their Bundesnachrichtendienst, or federal intelligence service. Was anyone punished for this lapse? At a minimum, Obama should have called Brennan on the carpet. Depending on the extent of the CIA’s follies, Obama may have to consider firing Brennan. Once again the issue of Obama’s competence in running the federal government is at issue.

But the full story will only emerge if Congress exercises real oversight and scrutiny, a task that it has lamentably failed at in the past. This will not be the last chapter in U.S.-German relations. But it could end up rewriting the relationship if Obama does not move swiftly to contain the damage. So far, however, he seems more interested in playing pool and quaffing beers.