Downfall: The Demise of Steve Bannon 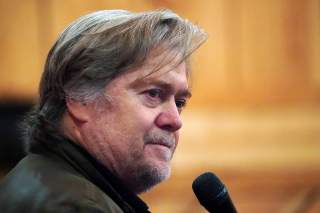 When Steve Bannon left the White House last August, he declared, “I’m free. I’ve got my hands back on my weapons.” But his ouster at Breitbart, where Rebekah Mercer is said to have insisted on his departure, means that he is deprived of them once more, this time perhaps permanently. It’s a stunning and rapid fall for the man hailed at the outset of Trump’s presidency as his puppet-master—and a welcome moment for Senate majority leader Mitch McConnell, who was intent on the destruction of his nemesis.

The truth is that the Trump revolution is devouring its own children. Donald Trump has not only engineered the very public defenestration of Bannon. He also may sign a comprehensive immigration deal with the Democrats and will attend the annual global elite meeting in Davos. The Republican establishment, left for dead, is now reviving, while the populist movement that Bannon headed has been wrong-footed.

Bannon, a right-wing Catholic who grew up in Virginia, was suffused with resentment at what he saw as globalist elites intent on deracinating America. He ended up becoming an integral part of what Sam Tanenhaus, writing in the New York Review of Books, aptly called the “new tabloid right that was forming on the Internet.” Trump himself came to refer to him as “my Steve.”

But at the White House, his Steve also had loose lips, dialing Robert Kuttner, the editor of the American Prospect, to dismiss the idea of war with North Korea and dilating about his plans to blow up the Republican party. His incaution led to his departure from the White House. Next Bannon plotted to sabotage mainstream GOP candidates during the midterm elections. An early test case came in Alabama where Bannon staunchly supported the child molester Roy Moore in his run for the Senate. Once more, Bannon came up empty.

The coup de grace, however, came with Bannon’s remarks in Michael Wolff’s new book Fire and Fury: Inside the Trump White House about “treasonous” and “unpatriotic” behavior by the participants in the now-infamous June 2016 New York Trump tower meeting between the Russian lawyer Natalia Veselnitskaya and leading Trump officials, including Donald Trump Jr., Jared Kushner and Paul Manafort. Trump was enraged. He went on a Twitter spree, including dubbing Bannon “Sloppy Steve,” and in a White House statement disparaged his contributions to the campaign as minimal. Days later Bannon issued an abject apology, though he did not include Kushner’s name in it, in a desperate attempt to salvage his relationship with Trump. It didn’t work.

Where does this leave Bannon? He might seek to reinvent himself as a mainstream commentator on one of the major cable networks such as CNN. Bannon would be a prize catch. Whether Bannon, who is known for his erratic work habits and hours, not to mention unusual dress, would be able to function as a regular commentator is an open question. There is a long history of former White House advisers such as Patrick J. Buchanan shuttling back and forth between government and the media. The other avenue would be for Bannon would be to keep the faith, as it were, with the populist movement he helped to create and train his weapons on Trump, in the hopes of pushing him to the right.

But it seems clear that loyalty to Trump, and Trump alone, is what animates the right and that Bannon wildly overreached in attacking him and his family. For now, Trump is sending signals that he’s moving away from his base and towards the Wall Street faction, led by Kushner, Gary Cohn and Steve Mnuchin, that did battle with Bannon and his allies over the past year. Add in the tax bill, which stiffed Trump’s base and was a bonanza for corporate interests, and the Trump presidency starts to look a lot more traditional. With the demise of Bannon, a new Trump, shorn of the influence of the populist wing and more receptive to the establishment wing of the GOP, may be emerging.