Dragon on the High Seas: China's 3 Most Lethal Weapons of War on the Water 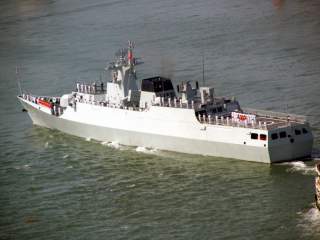 Modern China has finally achieved a long-held dream: secure land borders. The Mongols, western colonial empires and the Japanese have all carved out significant portions of the country in the past. Although China could never be truly conquered, such disruptions caused considerable loss of life and property and halted Chinese political and economic progress. China is now free to develop however it wishes.

Part of China’s new direction is the creation of a modern, world-class navy. The protection of Chinese interests, which are now global, the support of Chinese territorial claims and the ability, if necessary, to keep the Americans at bay are key goals. To support those goals, China is building everything from new patrol boats to aircraft carriers. With that in mind, here are three of China’s most lethal weapons of war on the water.

The 052C/D series of destroyers are designed primarily with the air defense mission in mind, protecting high-value naval assets such as aircraft carriers and amphibious assault ships. The ships resemble the U.S. Arleigh Burke and UK Daring class anti-air warfare destroyers both externally and in mission.

The 052C/D destroyers are armed with the HQ-9 “Red Banner” surface-to-air missile, a descendant of the Russian land-based S-300. Similar to the American SM-2 sea-based interceptor, the Red Banner has a maximum speed of around Mach 4 and a range of 124 miles. The HQ-9 has a wide engagement envelope, capable of intercepting everything from low-flying cruise missiles to ballistic missiles.

Like the Burke class, the 052C/Ds have a fairly well-rounded armament suite, making them capable of just about any sort of mission. Each carries eight YJ-62 anti-ship cruise missiles. Externally resembling the U.S. Tomahawk cruise missile, the YJ-62 has a range of 280 kilometers and may also have a land-attack role.

The class is also equipped with one 100mm dual-purpose gun, two Type 730 30mm close-in weapons systems for use against missiles and aircraft and six anti-submarine torpedoes. Four anti-submarine warfare rocket launchers are capable of attacking submarines from up to three miles. The class also has a helicopter landing pad and hangar to accommodate one Z-9 or Ka-28 helicopter.

Six Type 052C/Ds have been built so far, with at least three more planned.

China’s quest to complete its first aircraft carrier, Liaoning, would have been pointless without an aircraft from which to fly it. As a result, China embarked on a program to develop just such a plane, ideally a fighter-bomber that could credibly fulfill both roles.

China originally wanted to buy the Su-33 carrier-based fighter, a twin-engined, multirole carrier fighter descended from the venerable Su-27 Flanker. In Russian service, the Su-33 serves on the Admiral Kuznetsov, Russia’s lone carrier. Russia reportedly refused to sell the Su-33 after discovering China had produced a knockoff of another Su-27 variant, the J-11B.

The J-15 may be descended from the Russian Su-27 basic design, but inside it’s Chinese. The AESA radar, avionics, infrared search and track system, and even the engines are of Chinese origin. The J-15 utilizes two WS-10 afterburning turbofan engines, the same used in the land-based J-10 fighter. Taking off from land, the J-15 is supposedly capable of carrying twelve tons of weapons.

Unfortunately Liaoning’s design limitations limit the J-15’s effectiveness. A lack of aircraft catapults meant that a ski-ramp had to be installed instead. A ski ramp is not as effective as a catapult and allegedly a J-15 cannot take off from the carrier more than two tons of weapons when fully fueled. This is a bad problem made worse by the fact that, unlike U.S. carrier planes, China’s carrier planes currently have no in-flight refueling capability.

Given that the J-15 is China’s only carrier aircraft, it should be expected that it will squeeze as many versions out of the plane as possible, covering as many roles as possible. According to Janes and Chinese Internet sources, there will be three variants: the standard fighter bomber, a trainer and an electronic warfare aircraft modeled on the US EA-18G Growler.

As of October 2014, only 11 J-15s were known to be operational, a number far too small to be useful for an aircraft carrier.

The Type 056 class Corvette may not be the most heavily armed ship in the world, but it may soon be one of the most numerous. At least twenty-three 056 ships have been built, with ten in 2014 alone. Total inventory including all variants could be more than fifty, completed by 2018.

The Type 056s are China’s answer to the Littoral Combat Ship. Built to replace antiquated coastal patrol boats and submarine chasers, the corvettes will likely patrol China’s coastlines with potentially hostile neighbors—such as Vietnam—and provide a naval presence in the shallow waters of the South China Sea, especially near the Spratly and Paracel Islands.

Weighing 1,500 tons fully loaded, the ships are small but pack a lot of punch. A 76mm gun up front can engage ships and aircraft and two 30mm remote weapon systems for engaging aircraft, missiles and small boats. For close-in missile defense, the 056s are equipped with an eight-shot FL-3000N missile launcher, similar to the U.S. RAM missile launcher.

Each 056 packs a formidable offensive punch in the form of four YJ-83 “Eagle Strike” anti-ship missiles. Similar to the American Harpoon and French Exocet, these missiles can attack targets more than 124 miles away with a 350-pound high-explosive warhead. The missile flies five to seven meters feet above the wave tops at near supersonic speeds, making it difficult for defenders to shoot down.

The corvettes are also capable of hunting submarines. Standard 056 ships are equipped with a hull mounted sonar, helipad and for one Z-9 helicopter, plus six anti-submarine torpedoes mounted on the deck. Production has begun on a new anti-submarine warfare variant with a cutout in the stern for a towed-array sonar.

A version designed for the China Coast Guard was recently spotted at the Huangpu Shipyard in Guangzhou.