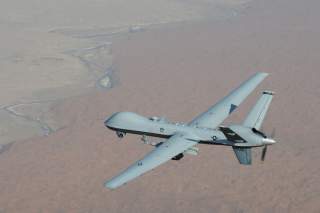 The new Obama policy easing restrictions on drone exports will unnecessarily alarm many people. It’s a sensible move to let U.S. manufacturers share an important new global aviation market – increasingly civilian – that they spawned. The policy will also let more U.S. allies share an important military capability whose true value lies in intelligence, surveillance and reconnaissance, not firepower – a fact borne out by how drones are being used against the Islamic State.

When an armed military drone crashes or gets shot down, no poor pilot dies for his or her country. So it’s easy to assume that this revolutionary weapon makes it more tempting to go to war, and that the Obama administration’s decision to relax restrictions on drone exports is going to open the door to more international conflict.

First, the administration is retaining its commitment to reviewing armed drone export requests under the Missile Technology Control Regime, which includes a “strong presumption of denial” for unmanned aircraft like the Predator and Reaper. More allies may get those drones in the future, but Predators and Reapers won’t be flooding the world market.

Second, while having armed drones has led the Obama administration to rely on targeted killings rather than more difficult counterterrorism policies, those operations rely on a complex communications infrastructure that is beyond the means of most nations. Flying  U.S. drones by global remote control relies rely partly on transmitting control and data signals to them via a fiber optic cable under the Atlantic transmitting information to a satellite earth station in Europe. That’s the only way to get those signals to and from the drone quickly enough to fly the aircraft and fire its weapons with accuracy.

Third, even when flown from the same continent where the flight crew is located, operating Predators and Reapers requires sophisticated ground control stations, datalinks, satellite earth terminals, and dozens of highly trained and skilled personnel. It’s a deceptively complex proposition that goes far beyond buying a couple of airplanes.

Fourth, while perhaps a logical assumption, there isn’t any real evidence that having armed drones – at least those available today — lowers the threshold for going to war, because even the armed Predator and Reaper are easy to defend against compared to manned warplanes. Made of lightweight composite materials and largely defenseless, they can be downed fairly easily by an adversary with real air defenses, as the Serb and Iraqi militaries proved in the 1990s.

Beyond that, while armed drones make excellent weapons for targeted killings, they carry little firepower. This is why manned aircraft are conducting the vast majority of strikes against the Islamic State, an enemy whose immolation of a captured Jordanian pilot and barbaric slaughter of other hostages would seem to argue for sending in drones.

The armed version of the Predator carries only two laser-guided Hellfire missiles, whose warhead weighs 13 to 45 pounds, depending on the variant used. The smallest precision-guided bombs dropped by U.S. manned warplanes weigh 250 pounds, those used most often weigh 500 pounds. Bombs of 1,000 and 2,000 pounds are often dropped as well. Even the Reaper, the world’s most heavily armed drone, typically carries only four Hellfires and two 500-pound bombs. Its maximum weapons payload is about 3,000 pounds, the equivalent of six 500-pound bombs, compared to the 80 a B-1 bomber can carry — 40,000 pounds.

Budget documents released Feb. 2 suggest the Air Force is regularly flying ten Predators or Reapers over parts of Syria and Iraq held by the Islamic State. Britain is also flying Reapers in Operation Inherent Resolve, and Italy is reportedly contributing two Predators to the campaign. The main role those drones are playing, though, is to help U.S. and allied manned aircraft find and attack targets and to produce other intelligence, which is what this generation of unmanned aircraft does best. In fact, according to Air Force statistics provided by a senior Air Force official, 99.24 percent of the more than 2.5 million hours flown by Predators and Reapers between 1998 and last October were “non-lethal” missions.

The previous U.S. monopoly on this revolutionary technology is rapidly evaporating. Israel, China and other countries are exporting drones. Dozens of nations are trying to acquire them, and as with all technologies, those with bad intentions may use them for nefarious purposes. The controls the administration is keeping on military drone exports, like those on sales of fighter planes and other military equipment, are wise. Congress certainly should have a say in whether individual sales are made and keep a close eye on those that are. But letting U.S. companies profit from this technological revolution and trusted allies use it for mutual benefit is a policy that’s simply on target.

Richard Whittle is a Global Fellow at the Woodrow Wilson International Center for Scholars and author of Predator: The Secret Origins of the Drone Revolution (Henry Holt and Company, September 2014)