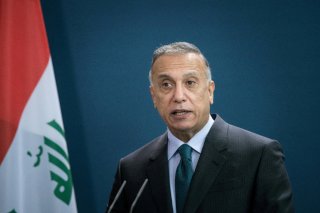 In the early morning hours of Sunday, Iraq time, militias launched three drones laden with explosives at Iraqi prime minister Mustafa al-Kadhimi’s residence in Baghdad’s heavily fortified international zone (or the “green zone” as Americans called it when they still occupied the country). According to various accounts, Kadhimi escaped either unharmed or only lightly injured although several of his bodyguards were not as lucky. While investigators collect forensic evidence and no group has claimed responsibility, both the motive and tactics suggest either Iran’s Islamic Revolutionary Guard Corps or the Iraqi militias it backs.

This appears to be the second assassination attempt of a state leader by drone (as my AEI colleague Klon Kitchen reminds me, FARC rebels once targeted Colombian president Álvaro Uribe with rudimentary drones). It is necessary to respond forcefully to ensure it is the last such assassination attempt, at least for some time. This means a change in both Iraqi and U.S. strategy in the region.

Kadhimi knew he was a target. Just months in his term, he sought to arrest Iranian-backed militia leaders who had launched rockets into the international zone and targeted the U.S. Embassy. When he arrested thirteen involved, militiamen marched on his residence, getting to within 150 meters of it. As that crisis peaked, neither the U.S. Embassy nor the White House situation room lifted a finger. The lesson Kadhimi took from that episode is that despite the State Department’s harsh rhetoric, the U.S. administration did not have his back. Kadhimi continued to target lower-level militiamen, but the U.S. failure to support him in his hour of need constrained the extent to which he could target the pro-Iranian militias.

This is not to suggest that the militiamen see Kadhimi as weak. The very fact that they targeted the prime minister—a figure who hopes to keep his position—after Hadi Amiri’s Fatah Alliance and other pro-Iranian groups fared poorly—suggests the vulnerability the pro-Iranian bloc feels at their lack of popular legitimacy. Still, he has been constrained.

This constraint has disappointed many Iraqis, including his most ardent supporters. There was great optimism when Kadhimi emerged from the political scrum that followed Adil Abdul-Mahdi’s 2020 resignation. Abdul-Mahdi, a former oil minister, sought to portray himself as independent, but was anything but. I visited his headquarters in 2018 during the government formation process and it was clear Iran was calling the shots. Iraqis saw this starkly when, after young Iraqis took to the streets by the hundreds of thousands to protest corruption, Abdul-Mahdi did nothing as Iranian-backed militia fired into the crowds, killing hundreds.

Iraqis saw Kadhimi, a former journalist and human rights activist, as a competent technocrat who had overseen the intelligence headquarters during the successful fight against the Islamic State. Because he had not contested elections and owed no favors to the sectarian and ethnic political machines which have dominated post-2003 Iraq, Iraqis hoped he would stand up to their victimizers with moral clarity and not cut the political deals that have long disenfranchised them. This was his prime mandate.

Kadhimi is the Iraqi equivalent of former Soviet Premier Mikhail Gorbachev or, in the Iraqi context, Ayad Allawi, two men much more popular among those outside their countries than inside them. For the vast majority of Iraqis, Kadhimi is a disappointment. He is neither charismatic nor decisive. When he assumed office, his goal seemingly became to remain there. Rather than stand up to various political machines, he cut deals with those most predatory to Iraqis in order to win their support, or at least, non-objection to his continued tenure. Abdul-Madhi and Kurdish leader Masoud Barzani, for example, formed an axis of corruption that came at the expense of the well-being and prosperity of ordinary Iraqis. Barzani quickly discovered he had little to fear from Kadhimi. Many Iraqis—including some in close political proximity to Kadhimi—acknowledged that Kadhimi had blown his opportunity to be a historic figure and had wasted his mandate. They suggested that others whom he had beat out for the premiership—former Najaf governor Adnan Zurfi, for example—would have seized the opportunity presented by popular revulsion at how the militias had killed Iraqis with impunity during the protests.

Can Kadhimi Reinvent Himself?

Sunday’s attack gives Kadhimi a new opportunity. He must tackle the militias and their leaders in the same way which his predecessor Nouri al-Maliki handled the trial of former dictator Saddam Hussein. Broad arrests of militiamen and their leaders are not enough: He should televise a trial that airs evidence of their abuses against the protestors and culpability in drone strikes. Saddam’s trial changed the conversation in Iraq, especially among those who chose ignorance as the Iraqi leader targeted Iraq’s Shi’ite and Kurdish communities (and many Sunni Arabs as well). It is time to stigmatize the treason that subordinating Iraq’s interests to Iran’s represents. Kadhimi will certainly say privately that any such arrests would result in a militia challenge to the state. This is true, but weakness and inaction are not strategies. They only result in attacks that are more frequent.

Kadhimi should not have to act alone, however. President Donald Trump’s attack on Iranian Qods Force Chief Qassem Soleimani shocked Iran’s political establishment. It was the right call, given Soleimani’s past and future efforts to kill Americans. The Trump administration did little subsequently to support Kadhimi in office, an abdication of responsibility made worse by the fact that many within Iran’s security establishment blame Kadhimi (and Iraqi president Barham Salih) of complicity in the strike.

President Joe Biden’s team has not been much better. It has failed to respond to most Iranian- or Iranian-backed drone or rocket attacks on U.S. facilities. That relatively few American servicemen died is not a reason for inaction for the simple reason that doing nothing to discourage such attacks ensures their continuance and the reality that eventually one will hit a barracks or a dining facility with great loss of life.

Biden’s team has responded at least twice, however, striking sites along Iraq’s border or across it inside Syria. Perhaps he and National Security Advisor Jake Sullivan believed they had threaded the needle: symbolically responded without doing anything to provoke Iran or goad the militias into a greater fight. In reality, they have convinced Qods Force strategists that they can act with impunity. It is time that the United States takes the fight against those responsible for the drone attacks into the heart of Baghdad and Tehran. If Badr Corps leader Hadi Amiri’s fingerprints are on any of the attacks, target him; he cannot project strength when hiding. The same is true for Asaib Ahl al-Haq leader Qais Khazali. It is also time to troll the Iranian-backed militias in a way that all Iraqis can see. After Soleimani’s death, his Iranian and Iraqi supporters plastered his mural across Baghdad, including just down the street from the U.S. Embassy. Perhaps it is time to hire some Iraqi artisans to erect a statue of Soleimani’s severed ring-clad hand—the way Iraqis identified his remains—in front of the American embassy and across from the shrine his supporters erected on the airport road. It may seem crude, but countering the Islamic Revolutionary Guards is best accomplished with their way of war rather than that to which Washington is most comfortable.

Biden may want to pivot to the Pacific but, as his predecessors all learned, this cannot be an either-or decision. Ending “forever wars” is not a decision for one side only; all combatants get a say. Love the Middle East or hate it, but the realities of the region mandate that no American leader ignore it.