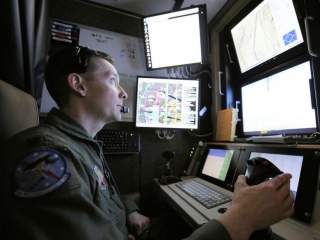 Ever since David felled Goliath with a slingshot, militaries have sought to deal death from a distance. Whereas David’s ingenuity earned him accolades and glory, his successors in asymmetric warfare are often derided for their physical remove from the battlefield.

On January 7, the Pentagon officially laid to rest a long-simmering controversy over how its drone and cyber warriors should be recognized for their innumerable contributions to America’s post-9/11 conflicts. After a lengthy review of its decorations and awards program, the military debuted an “R” device that can be affixed to preexisting awards “to specifically recognize remote but direct impact on combat operations.”

To understand the significance of this decision, it helps to recall the developments that preceded it. In one of his final acts as defense secretary, Leon Panetta announced the creation of the Distinguished Warfare Medal to reward extraordinary achievement impacting military operations, “regardless of the domain used or the member’s physical location.” The backlash was immediate and severe, with the award dubbed the “Nintendo medal” and its prospective recipients jeered as “cubicle warriors.”

Some of the criticism was legitimate. The medal’s order of precedence above the Purple Heart and Bronze Star, and just below the Distinguished Flying Cross, was probably misplaced. Much of the criticism was uncivil and ungrateful, putting the lie to the conventional wisdom that bipartisan accord is always a good thing. The shrillest voices on both the left and the right constructed a narrative of cowardice around drone warfare, albeit with entirely different agendas in mind. Whereas the former saw an opportunity to delegitimize targeted killing as a counterterrorism tool, the latter viewed drone strikes as emblematic of an American strategy (and populace) gone soft.

Amidst the furor, Chuck Hagel, Panetta’s Pentagon successor, abruptly cancelled the new medal a mere two months after it was unveiled. Whether Hagel’s infantry background made him more receptive to the outcry than Panetta, a former military intelligence officer who as head of the Central Intelligence Agency called drones “the only game in town,” is a matter for armchair psychologists.

By the time Hagel launched the Pentagon’s comprehensive awards review the following year, the Distinguished Warfare Medal was already consigned to the dustbin of military heraldry. The process merely ratified its preordained fate.

The irony of this three-year saga is that all the hand-wringing over heroism flies in the face of salutary trends, in which machines are increasingly substituted for the bodies of America’s youth. The history of military aviation is largely the interplay between standoff and precision. These principles have traditionally stood at odds, as pilots sacrificed safety for accuracy.

Networked warfare has enabled advanced militaries to pursue both greater humanity and greater survivability at once. This confluence is a potent antidote to enemies that deliberately and systematically violate the laws and customs of war. It also frees commanders from the grim calculus of General Curtis Lemay, who defined a “good day” as accomplishing the mission “without exterminating too many of our folks.”

The operative term in aerial combat over the last quarter century is “beyond visual range,” which denotes the distance at which engagements occur. The goal is to eradicate the enemy before he even knew you were there. In recent history, American air superiority has been so unrivaled that enemies are more apt to scuttle or bury their jets than send them to face certain demise.

This is no slight to the time-honored values of heroism and hardship, which are rightfully exalted in the military ethos and will always be in high demand. But sacrifice is made to achieve an end. It should not be fetishized to get in the way of doing—and rewarding—what works. The catapult, the crossbow and nearly every weapons advancement since have variously been decried as unmanly or otherwise unchivalrous.

Air Force pilot David Blair has boldly challenged his fellow aviators to rethink their cultural assumptions about remote platforms, questioning the normative distinction between bombardment at “ten thousand feet” and from “ten thousand miles” away. The real measure of one’s contribution to the fight, Blair observes, is not “combat risk” but “combat responsibility.” If they overlap, so be it. If not, so much the better.

What the critics miss is the crucial distinction between when and how we go to war. On the former, prudence dictates rarely and reluctantly. On the latter, it demands stacking the decks unapologetically in our favor. The concern that physical impunity will “seduce us into more wars” requires forbearance from our elected leaders. It is not a rationale for leveraging our troops’ lives to restrain America’s imperial ambitions.

The goal of war is victory, not virtue. A democratic nation with an all-volunteer force has a moral obligation to provide its troops with every technical edge that the budget can sustain and the laws of war permit. Anything less would violate a sacred trust.

There is little disagreement that those who endure the rigors and risks of combat should reap the highest military honors. But if war entails “increasing the distance between you and your enemy’s fist,” then we should not overlook—and certainly never denigrate—those who provide us with the longest reach.

America’s drone and cyber operators will shed no tears over being denied a medal of their own. Let’s just make one thing clear: the “R” device stands for remote, but it connotes respect.

Major Charles G. Kels is a judge advocate in the Air Force Reserve and senior attorney at the American Medical Association. Opinions expressed in this article are those of the author alone and do not necessarily reflect those of the Air Force, Department of Defense, or AMA.