Dual Engagement: The Saudi Factor in an Iran Rapprochement 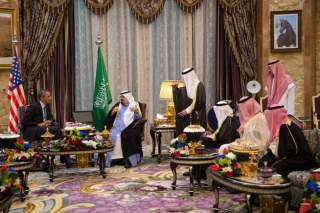 As the last pillar of America’s dual containment policy crumbles with an Iranian nuclear deal on the distant horizon, President Obama risks a further break down in relations with Saudi Arabia. This comes at a time when Washington requires both Riyadh and Tehran’s support in advancing its core national interests: ensuring a free-flow of oil to global markets through the Gulf, preventing nuclear proliferation, and curtailing the emergence of ISIS and local Al Qaeda affiliates from threatening America’s homeland and its interests and personnel abroad.

Washington’s long engagement in the region has been based on strong relations with key regional states, including Saudi Arabia and Israel. These stable alliances have enabled the U.S. to advance its core interests, and avoid the temptation of extension, despite the brief reckless adventurism of the Bush administration. Entering office in 2009, President Obama has muddled between realism and liberal interventionism in an attempt to pivot the U.S. away from the unilateralism of his predecessor andto vaguely leading with others.

Pivoting geopolitically, the President initially sought to stake out a more assertive political, military, and economic legacy in Asia with an envisioned de-escalation in the Middle East. Underlying his proclivity to tone down Washington’s emphasis on democracy promotion in the region, Obama quickly dispatched a letter to Iranian Supreme Leader, Ayatollah Ali Khamenei, offering engagement and mutely responded to the violent crackdown of the Green Movement’s 2009 protests. Seeking a quick exit from Baghdad in 2010, President Obama acquised to Prime Minister Maliki’s rejection of a residual U.S. force in Iraq, and tacitly acknowledged Tehran’s political, economic, and military presence in the post-2003 Iraq. At the same time, Obama assured long-time Arab leaders that he would de-emphasize democracy promotion.

This broader disengagement policy soon ran up against the popular activism, protests, and insurgency in the Arab world in 2011. Instead of maintaining course, Obama weakly embraced the popular protests in the region to the angst and anger of a number of his allies in the region, who looked on with apprehension as Obama hesitated and then pushed for Hosni Mubarak’s resignation. At the same time, the president reluctantly remained silent as the host of the U.S.Fifth Fleet, Bahrain, enveloped into sectarian strife that resulted in an armed intervention by the GCC.

Both privately and publicly, Riyadh has expressed concern and anger at Obama’s weak commitment to U.S.allies at a time of crisis, most notably in the case of Hosni Mubarak, and more broadly, Obama’s inconsistent actions and rhetoric in the face of these broader regional shocks. Obama has “led from behind” at a time when America’s regional allies have looked for the U.S. to be a credible military detterent to regional threats to their interests and security.

Deepening tensions, Saudi Arabia has witnessed Obama disregarding its interests in two critical areas: initially embracing the Muslim Brotherhood in Egypt and failing to provide the military and economic support necessary to tilt the balance of power on the ground against President Assad in Syria, to the benefit of  its regional political opponent, Iran, as well as Russia and the Assad regime who have benefited from a fragmented, radical, weak Syrian opposition. Breaking his private commitment to King Abdullah to enforce his “red line” in August 2013, Obama’s public about-face furthered the impression that his word couldn’t be counted on. Riyadh has watched with alarm as ISIS has surged, Iran has encircled its borders, and a new wave of Islamist popular democratic politics has lit up the region.

Obama’s willingness to engage Iran on its nuclear program and to tacitly accept Tehran’s growing political and military role in Iraq and Syria  in countering ISIS has further strained the U.S.-Saudi relationship. Obama’s letter this fall assuring  Ayatollah Khamenei of his commitment not to target Assad’s government in the U.S.-led military campaign underscored to Riyadh that Obama would be willing to accommodate a more unconstrained Iran in the region in exchange for a nuclear deal, at the expense of Saudi Arabia and its interests. The depressed global oil prices, as a result of slowing demand and a surplus of oil on the market, and the prospects of more Iranian oil entering the market further underscores to Riyadh the negative benefits of an economically rehabilitated Iran.

Disregarding these concerns, Obama hasn’t placed his engagement with Iran in any clear foreign policy strategy that takes in account both the preservation and advancement of America’s national interests, as well as those of core allies in the region, including Saudi Arabia. As a result, Obama has arguably opened the door for ending America’s decades old containment policy against Iran on the premise that such a policy rested primarily on Iran’s behavior on its nuclear program, without tying improved relations to America’s other core national interests. While the president has welcomed cooperation with Iran on ISIS, deep differences exist still between Iran and the United States over Iraq, Lebanon, Israel, Palestine, Syria. By loosening the economic leverage of the sanction regime without taking in account other areas of contestation, Obama is making the risky bet that Tehran will be incentivized to cooperate with the U.S. on broader regional issues beyond ISIS.

Instead, engaging Iran should be incorporated into a broader regional strategy of dual engagement, which can replace the U.S. containment policy and assure Saudi Arabia of America’s long-term security commitment. By incorporating Riyadh’s interests and concerns in America’s engagement with Iran, a comprehensive dialogue can begin on the future stability and security of the Gulf, as well as the broader Middle East where Saudi Arabia and Iran have overlapping and at times, competing interests. Such a policy would importantly safeguard America’s broader national interests, and also provide an opportunity for sustainable engagement with Iran in the long-term.

Going beyond offering security assurances as these nuclear negotiations enter a critical phase, the P5 + 1 should invite Saudi Arabia to join the talks as an observing party. While Riyadh may decline such an invitation, this invitation could be a trust building measure with GCC states who view these negotiations with skepticism and distrust, and also an opportunity to address GCC security concerns in the final round negotiaitons.

Washington should also take more steps to support the establishment of a joint GCC military command. With their already significant military presence in the region, Washington and London could feasibly offer logistical, training, and advisory support in building a joint command and advising in its execution based on the U.S. and the UK’s experience with multi-national security organizations. Mindful of budget constraints and global defense commitments in the Pacific and in the broader Middle East (notably in Turkey and in Jordan), Obama could also upgrade America’s military and security assistance and arrangements in the Gulf, including expanding its naval presence in the Gulf. As once proposed by Hiliary Clinton, Obama could also offer to extend the U.S. nuclear deterrence to the Gulf if a nuclear agreement isn’t reached. Less feasible, while Tehran and Riyadh have had limited dialogue these past few months on improving relations, Obama could support Riyadh’s engagement with Tehran. As a state that has deep relations with Saudi Arabia, and nascent negotiations with Iran, Washington could play an effective role in chairing negotiations, if both states buy-in to U.S. mediation.

Finallly, if P5+1 talks are successful, Obama should move quickly to convene a broader dialogue on the future security and stability of the Middle East. Obama, with support of the EU and possibly Russia, could incentivize Tehran to take this path by conditioning the upgrading of relations and broader economic support and investment on cooperation on areas of mutual concern.

The failure to take such steps will only heighten Saudi Arabia’s insecurity and deepen King Abdullah’s distrust, at a time when the U.S. heavily relies on Riyadh’s support in stabilizing the Egyptian government, aiding the beleaguered government in Benghazi, containing Hezbollah politically in Lebanon, supporting the Syrian opposition, financing the government of Jordan, and participating in U.S. counterterrorism in the region.  While many of these initiatives are in Riyadh’s own interests, and Saudi Arabia would continue them regardless of U.S. support, the absence of a strong working relationship decreases opportunities for cooperation and collaboration. A strained relationship isn’t a substitute for engagement, and only opens the door for distrust and destructive policies detrimental to both states’ interests.

President Obama’s reluctance to lead threatens to leave his successor a Middle East characterized by a weaker relationship with Saudi Arabia and an emboldened Iran. Such a path is not a legacy the President should want or leave to his successor in his final two years in office.