Dumping America's ICBMs Would Be a Big Mistake 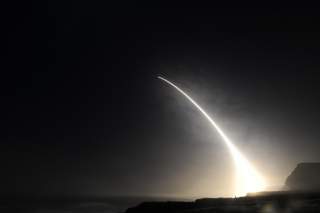 Last week, former secretary of defense William Perry argued in the pages of the New York Times that it was time to remove land-based missiles from the American nuclear triad of missiles, bombers and submarine-launched weapons. We agree with Secretary Perry that it is time to ditch the nuclear habits of the Cold War, but we disagree that the ICBM force should be removed—at least not yet.

American security can be guaranteed with a much smaller ICBM force, certainly fewer than the 450 currently deployed. We therefore believe that a gradual build-down, as conditions permit, of the ICBM inventory is a more stable approach, one that will enhance the U.S. deterrent and mitigate the stability issues that rightly concern Secretary Perry.

Perry’s argument is based both in money and strategy. As he notes, updating the triad, including a new strategic bomber and a new class of ballistic missile–carrying submarines, is going to cost something on the order of a trillion dollars—a trillion—over the next twenty-five years. This is astoundingly expensive.

A fair amount of this spending is unnecessary (including the creation of a new generation of nuclear cruise missiles, a weapon needed not for deterrence but for protracted nuclear war fighting). While America needs a new ballistic-missile submarine, the current bomber and land-based missile forces, even if reduced in number, can do the job Perry describes of backing up an American deterrent located largely at sea.

Secretary Perry’s main argument is that the land-based ICBM force is destabilizing:

During the Cold War, this was a genuine concern, not least (as Perry notes) because of the possibility of a computer error or other malfunction that could mimic an attack against the ICBM force. This was especially dangerous when the United States and the Soviet Union relied heavily on their ICBMs for their and speed and their reliability. They are the only part of the triad that are virtually unstoppable, unlike subs that can be sunk or bombers that can be shot down—and both the United States and the USSR kept their land-based forces on dangerously high alert rather than risk losing them all in a first strike.

But we are no longer in a tense Cold War standoff that requires highly accurate ICBMs to lead our retaliatory strikes. Likewise, the accuracy of sub-launched missiles no longer requires ICBMs to engage in “damage limitation” by quickly destroying enemy weapons in reserve or slated for follow-on strikes.

Moreover, we believe that Secretary Perry severely understates the deterrent effect of a force based in the United States itself. The location of the ICBMs is the best protection against nuclear risk-taking by Russia or China precisely because it means that any attempt to neutralize the American deterrent will always necessarily require a direct attack on the continental United States. There can be no “limited” scenarios in which U.S. retaliation is thwarted by attacks on submarines at sea or by downing U.S. bombers with air defenses before they can attack their targets.

Those who would argue for the elimination of ICBMs propose several objections. The most persuasive of these is Perry’s caution about errors and malfunctions. If U.S. leaders see—or believe they see—an attack on the ICBM force, this argument goes, they will have no choice but to launch them rather than lose them. Since the enemy’s weapons will arrive under a half hour, the president will have a matter of minutes to make a decision.

This, however, is a straw man, based in now-defunct Cold War strategy. During the Cold War, an attack on the ICBMs would indeed necessitate launch, since it was the only leg of the triad fast and accurate enough to strike enemy strategic forces and other critical targets, and leave at least some hope of a cease-fire before the war collapsed into the spasmodic destruction of cities. Otherwise, a Cold War president would face only the options of surrender or an escalation to using less accurate weapons to incinerate enemy cities, and thus suffer apocalyptic damage in return.

Perry makes a fair point that the accuracy of both the bomber and submarine force is on par with its land-based counterpart. But this, in turn, means that if America were to “ride out” a strike on the ICBM force, the submarines and bombers—as Perry admits—could do whatever tasks are left once the enemy has emptied its own ICBM force at us. The major virtue of the ICBM force, then, is not what it can do after an attack, but that that the enemy will have to take it into account before an attack, and consider the cost of starting an all-out nuclear exchange between the homelands.

Moreover, if the ICBM force were targeted, the United States would still be able to attack, with great speed and precision, not only the remaining enemy strategic force but important parts of enemy military infrastructure. Russia or China would then be the ones to face the fateful decision to attack cities, a situation they will inevitably bring on themselves the moment they initiate the conflict—which is exactly the realization that should deter them in the first place.

Another argument is that the deterrent effect of ICBM location in the United States itself is already accomplished by the bomber and submarine force, because no sane attacker will forego a strike on bomber bases and submarine pens in the United States. Again, this is a stronger argument if we were all still contemplating a full-on Cold War nuclear shootout. Unless we seriously believe that we would be attacked out of the blue, we should instead assume that during a crisis that our subs and bombers have been sent away from their bases (unless the plan is to leave subs in port like unprotected, expensive, floating ICBM installations, a move that makes no sense).

If those subs and bombers have been dispersed—again, on the assumption that we are not at a full nuclear war from a standing-still position—the land-based ICBMs require the enemy to land nuclear weapons on American soil and kill millions of American citizens. This will ensure there can be no slow-motion attacks on bombers and subs, and eliminates the option of limited nuclear war against the U.S. deterrent on the cheap outside of North America.

We are strong supporters of Secretary Perry’s efforts to reduce the role of nuclear weapons in U.S. national defense, and especially his efforts to combine fiscal prudence with strategic clarity. The current Minuteman force can serve us reliably until at least 2025, and perhaps beyond. We should explore the opportunity for perhaps a smaller, equally dispersed ICBM force, thus realizing significant savings while creating a more stable deterrent and pressing forward toward the ultimate goal that, ideally, would be shared by everyone—to move toward a future in which the major powers no longer rely on nuclear forces for their security. A smaller, but highly effective land-based ICBM force, at least for the next twenty years, can make a serious contribution to that effort.