As the Dust Settles in Kazakhstan, A Path Forward Is Revealed 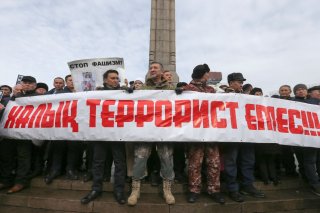 Some 2,500 troops from the Russian-led Collective Security Treaty Organization (CSTO) arrived in Kazakhstan last month at the request of President Kassym-Jomart Tokayev. Tokayev made the critical decision after peaceful protests rapidly devolved into a violent uprising—the most intense protests the country has seen since the collapse of the Soviet Union.

As Russia’s invasion of Ukraine intensifies, new questions have emerged about the Kremlin’s designs for Eurasia and the geopolitical equilibrium of the region. Kazakhstan, the largest economy of Central Asia, could be caught in the crossfire as Russia and China seek to consolidate their spheres of influence.

The January Protests in Context

The drivers and catalysts of Kazakhstan’s January protests are multi-faceted and long in the making. Protests began peacefully in the country’s oil-rich region of Mangystau after subsidies for liquified petroleum gas (LPG) were lifted, a consequence of price liberalization reforms. Anger over the price spike triggered mass demonstrations, at the root of which was deeper discontent over the pace of economic and social change in the ex-Soviet country.

Since the beginning of his tenure, Tokayev has attempted to introduce several reforms aimed at increasing upward mobility and allowing for more political expression. After independence, the development of the country’s vast natural resource wealth—facilitated by American oil and gas companies—brought nominal gross domestic product to almost $10,000 per capita. But according to the World Bank’s GINI index, economic inequality remained high with wealth concentrated among a small group of elites. Although Kazakhstan has five billionaires featured in the Forbes’ The World’s Billionaires list, the minimum wage is less than $100 a month, with half of the country living in rural poverty.

In 2019 Tokayev assumed the presidency with a mandate to ameliorate inequality and push additional economic and civic reforms. However, early in Tokayev’s presidency, reforms stalled. Covid-19 lockdowns, supply chain disruptions, and high inflation raised the price of goods. Public assembly was curtailed due to the pandemic. The power transition to Tokayev in 2019, while hailed as a step in the right direction for Kazakhstan’s democratization, left some citizens questioning the strength of competition in the elections. LPG price de-subsidization (ironically a well-intentioned market reform) broke the dam of mounting public frustration.

Protests began peaceably, with the government allowing unprecedented public assemblies. Tokayev listened to protestor demands and offered conciliatory actions, including the reimposition of price controls and dismissal of the government. Despite these efforts, the situation on the ground spiraled out of control. Rioters—some of whom may have been influenced by outside Islamist groups—clashed with police and burned down government offices. Scores of looters ransacked businesses while armed mobs stole weapons from police precincts and the National Security Committee with allegedly little resistance from servicemen. A prominent activist described the scene in Almaty as “unlike any protest” she had participated in. Some 200 deaths and many more injuries have been reported.

The escalating violence led Tokayev to turn to the Collective Security Treaty Organization (CSTO). In his appeal to the Russian-led security alliance, he described Kazakhstan as under siege by armed bandits and foreign-trained terrorists who had seized control over weapons, buildings, and even the country’s largest airport.

Despite the chaos last month, a sense of calm has prevailed. The CSTO withdrew one week after its deployment without any lingering presence. However, its involvement has undoubtedly left a mark on the region. The mission in Kazakhstan demonstrates that Russia is strengthening its power projection capabilities. Although the Kremlin acted with restraint by successfully commanding an alliance that can crush uprisings, it showed its ability to reshape the region in its favor and give patronage to those in its orbit.

Although China offered military assistance to Kazakhstan two days after the CSTO deployment and supported the government’s actions, Beijing kept a lower profile during the unrest. However, if Kazakhstan is pulled further into Russia’s orbit, China may no longer be content. The country is crucial to China’s overland export trade within its Belt and Road initiative. Kazakhstan is also a major recipient of Chinese investment capital, especially in the oil and gas industries. Kazakhstan should be wary of the strings attached to Russian assistance to avoid being caught between Moscow and Beijing.

Since its independence, Kazakhstan has sought to maximize its sovereignty by carefully maintaining good relations with Russia, China, and the United States. The commitment to a multi-vector, or “balanced,” foreign policy, a strategy pioneered by the first president of Kazakhstan, Nursultan Nazarbayev, allowed the country to build a robust relationship with Western investors while maintaining cordial relations with its neighbors. The former president addressed the nation in the aftermath, indicating his support for Tokayev and the need to continue economic reforms. Tokayev should take a page out of Nazarbayev’s playbook to avoid becoming an area of friction between Moscow, Beijing, and Washington.

This is an inflection point for Kazakhstan’s trajectory. If Tokayev wishes to preserve his country’s agency and improve the lives of his citizens, then he needs to push through economic and social reforms, regardless of the obstacles. Further instability due to a lack of perceived reform could contribute to capital outflow and undermine Kazakhstan’s sovereignty. Western investment flight and overreach from its neighbors would prevent meaningful economic and social improvements for Kazakhs.

To his credit, Tokayev has made it clear that his goal is to accelerate social and economic reforms, including by addressing income inequality, corruption, tax evasion, and corporate tax burdens. The new cabinet should use its expertise to prevent capital flight while assuring the country remains attractive to multinational investors. Tokayev has already announced that fostering a better investment climate and reforming the country’s sovereign wealth fund are key goals for his administration.

The United States should continue to encourage and facilitate liberal socio-political progress. It should bolster the pro-democracy civil society in the country and support the government’s commitment to real change. Financial investments from the West can counterbalance Russian and Chinese influence and raise the standard of living for many across the country. The situation, for now, is stable, with companies like Chevron renewing their commitment to Kazakhstan. References to the strategic importance of Central Asia in the America COMPETES Act of 2022, which was recently passed by the U.S. House of Representatives, is a good sign that U.S. policymakers are also taking the region more seriously, particularly as it relates to competition with China.

As the government promises to improve people’s lives and restore the world’s confidence, it should be careful to factor in its relationships with the great powers. While Tokayev should look towards the future while ushering in reforms, he should not abandon Kazakhstan’s history of robust diplomacy. In this regard, the government certainly has its work cut out for it.

James Grant is the Associate Director of the International Tax and Investment Center’s (ITIC) Energy, Growth, and Security Program and a graduate of Johns Hopkins School of Advanced International Studies.

Sarah Shinton is the Program Assistant of ITIC’s Energy, Growth, and Security Program and a graduate of the London School of Economics.

Image: People hold a rally in memory of victims of the recent country-wide unrest triggered by fuel price increase in Almaty, Kazakhstan, February 13, 2022. A banner reads: “People are not terrorists.” Reuters.