Duterte Is Under Pressure to End the Philippines-China Honeymoon 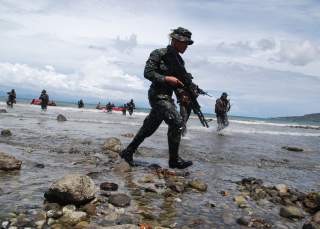 Since his ascent to presidency, Rodrigo Duterte has repeatedly threatened to upend Philippine foreign policy. In stark contrast to his predecessor, Benigno Aquino III, he has as frequently lavished China with praise as he has lambasted America with verve and venom.

Highly popular at home, and notorious the world over, Duterte has often been portrayed as an oriental despot with an unshakable grip on the Philippine state. Yet, his ability to unilaterally reshape the country’s external relations has been grossly exaggerated by both domestic and international observers.

As I have been arguing for months, there is a limit to how far the Filipino leader can downgrade his country’s alliance with America and, accordingly, upgrade strategic relations with China. This is mainly because of the profound influence of the Philippine security establishment—namely, the cabal of conventional-minded generals, diplomats, politicians and opinion makers—which is as deeply entwined with Washington as it is suspicious of Beijing.

While the charismatic Duterte has managed to convince a growing proportion of the Philippine society that America is not a reliable partner, he has fallen short of convincing his generals, the political class and the broader population that China is a trustworthy neighbor.

Amid growing Chinese maritime assertiveness within the Philippines’ exclusive economic zones, both in the South China Sea and the Pacific, the Filipino president, just as I predicted, has come under unprecedented pressure to adopt a tougher stance against Beijing. The Philippines’ honeymoon with China is far from over, but a full restoration of bilateral ties looks increasingly unlikely.

“We tried to be friends with everybody but we have to maintain our jurisdiction now, at least the areas under our control [in South China Sea],” declared Rodrigo Duterte during a recent visit to a military camp in the western province Palawan, which is close to the dispute Spratly chain of islands.

The Armed Forces of the Philippines (AFP) and top defense officials are deeply worried about China’s sprawling network of airstrips and military bases nearby. By all indications, it is just a matter of time before China deploys fighter jets and advanced weaponries to its artificially created islands.

“What’s ours now, at least let’s get them and make a strong point there that it is ours,” Duterte continued to the obvious delight of his pumped up soldiers, who have been awaiting the green light to step up the Philippines’ eroding strategic footprint in the Spratly chain of islands for years.

He then instructed the AFP to fully occupy Philippine-claimed land features, step up patrols in the country’s traditional fisheries grounds and refurbish facilities on Thitu Island, which has been fully occupied by the Southeast Asian country over the past four decades.

Manila claims nine land features in the Spratly Islands, mostly reefs and low-tide elevations with the exception of Thitu, an island-sized rock that has hosted an airstrip since 1977. Filipino strongman Ferdinand Marcos (1965–86) was the first regional leader to establish a modern, 1,300-meter-long runway on disputed land features in the area.

Of course, Duterte didn’t shy away from bravado. He even promised to personally plant the Philippine flag on Thitu Island, which hosts a significant civilian population with its own mayor, during the country’s Independence Day in June. This was reminiscent of Duterte’s infamous bluster during his presidential campaign, when he suggested riding a jet ski to disputed land features in the South China Sea and planting the Philippine flag on them.

Caught off guard by Duterte’s remarks, the Ministry of Foreign Affairs of the People’s Republic of China immediately shot back, calling upon Manila to “continue to properly manage maritime disputes with China and safeguard together the sound and stable situation of China-Philippines relations.” Duterte’s highly patriotic remarks, implicitly directed at China, stood in stark contrast to his nonstop praise for the Asian juggernaut for supposedly “loving [the Philippines] and helping [the country] survive the rigors of this life.”

Throughout the first quarter of this year, China has been on a proactive charm offensive towards the Philippines, dispatching Commerce Minister Zhong Shan and Vice Premier Wang Yang, who have offered multibillion-dollar investment deals to Duterte, including investments in his home island of Mindanao. Worried about China’s intentions, the Philippine defense establishment quickly mobilized.

Defense Secretary Delfin Lorenzana openly accused China of engaging in suspicious activities in the Behnam Rise, part of Philippine continental shelf in the Philippine Sea, in late 2016. In particular, Lorenzana suggested that China may have conducted oceanographic research to canvass seabed resources and assess the prospects of stationing submarines in the area. Days later, top defense and foreign ministry officials flatly rejected Duterte’s (false) claim that the Chinese had his permission to conduct marine scientific research in the area.

Shortly after, the Filipino leader was once again in the hot seat when he nonchalantly suggested that the Philippines can’t do anything if China chooses to build facilities on the Scarborough Shoal. The remarks provoked nationwide criticism, with leading legislators and magistrates openly calling upon the president to refrain from such defeatist statements. Defense officials made it clear that any Chinese reclamation activity on the contested shoal, which is just above one hundred nautical miles away from Subic Bay Naval Base and Clark Air Base, as “unacceptable” and “very, very disturbing.”

Meanwhile, experts warned the president that he could face impeachment if he didn’t assert Philippine maritime claims in the Behnam Rise and Scarborough Shoal, while an opposition legislator went so far as formally filing an impeachment complaint against Duterte. The message was clear: Duterte can’t unilaterally shape Philippine foreign policy, particularly towards China. The Filipino president’s latest remarks vis-à-vis the Spratlys was likely a calculated attempt to refurbish his patriotic credentials, mollify the security establishment, signal his resolve to Beijing and keep critics at bay.