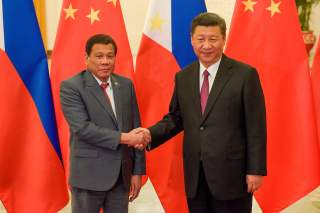 Under President Rodrigo Duterte, the Philippines continues its pivot to China in earnest. In his second State of the Nation Address (SONA) on July 24 , the firebrand Filipino leader lashed out yet again at Western countries, namely the European Union and the United States, for criticizing his controversial war on drugs, which has been condemned by human rights groups at home and around the world.

Conspicuous in his two hours long address, however, was almost the total absence of any substantive discussion of the Philippines’ ongoing territorial disputes with China. Duterte only made a perfunctory remark on the South China Sea spats, underlining the importance of dialogue and peaceful negotiations among claimant states. To the delight of the Chinese representatives in the audience, he broadly painted the Asian juggernaut as a generous partner for economic development in the Philippines.

For the past two months, the Pentagon has been providing much-needed counterterror assistance to the Philippines, namely the deployment drones and a Special Forces unit to Marawi City in addition to a large cache of weapons for free. Yet, Duterte seems more interested in solidifying his relationship with Beijing. Right after his address, which marked the beginning of his second year in office, Duterte conducted a press conference, where he nonchalantly threw out the prospect of resource-sharing with China within the Philippines’ Exclusive Economic Zone (EEZ).

“If we can get something there with no hassle at all, why not?” he explained, reiterating his commitment to avoid tensions with Beijing at all cost. For months, the Filipino president has forward a narrative, whereby the choice for the Philippines is supposedly between a suicidal conflict with Beijing or negotiating on its terms. With the Southeast Asian country running out of energy reserves, namely in the Malampaya plant in the South China Sea, it is eager to move ahead with developing untapped hydrocarbon reserves in the Reed Bank, which falls within the Philippines’ EEZ as well as China’s nine-dashed-line claim.

The Filipino leader has suggested that China may tag along in the prospective project: “When they [China] start to excavate the gas and oil [in the South China Sea], I tell you it’s going to be just like a joint venture . . . it will be fair.” One former legislator, who is currently the Philippines’ special envoy to the Asia Pacific Economic Cooperation (APEC), has gone so far as suggesting that the Philippines should just “suspend” its sovereignty claims in exchange for Joint Development Agreements (JDAs) with Beijing. The problem with the JDA proposal, however, is two-fold.

First, it could potentially violate both the Philippines’ constitution as well as the landmark Arbitral Tribunal award at The Hague last year. Second, and more importantly, it implicitly legitimizes China’s overreaching claims across the South China Sea, providing the Asian powerhouse greater impetus to increase its footprint across the disputed waters. After all, China has ably leveraged its military might and growing paramilitary presence in the area to set the rules of the game in complete disregard for modern international law and interests of smaller claimant states. China is basically telling its neighbors: “What is mine is mine, what is yours, we share.”

According to one authoritative definition, JDAs pertain to “Agreement[s] between two states to develop so as to share jointly in agreed proportions by inter-state cooperation and national measures the offshore oil and gas in a designated zone of the seabed and subsoil of the continental shelf to which both or either of the participating states are entitled in international law.”

In the South China Sea, however, the precedence has been nothing short of a fiasco. In the mid-2000s, Philippine President Gloria Arroyo, who is currently Duterte’s foreign policy advisor, signed a Joint Maritime Seismic Undertaking (JMSU) agreement with Beijing and Hanoi. The agreement came on the heels of China’s massive infrastructure investment projects in the Philippines.

Shortly after, however, not only were the Chinese investment embroiled in corruption scandals, but the JMSU was also challenged as unconstitutional and potentially treasonous. Amid massive political backlash, Arroyo, who negotiated the agreement with a controversial secrecy clause, refused to renew the three-year-old deal, which expired in 2008. It is precisely this shady past dealing between Manila and Beijing that continues to cast a dark shadow on bilateral relations. It is also largely why China remains highly unpopular in the eyes of Filipino people and why the JDA proposal is controversial.

The other problem is that the Philippines’ 1987 constitution precludes an arrangement, where China can get what it wants: Recognition of its sovereign claims well within Philippine waters.

Article XII, Section II on National Economy and Patrimony of the Philippines constitution states, “the exploration, development, and utilization of natural resources shall be under the full control and supervision of the [Philippine] State [author’s emphasis].” Any joint-venture, the constitution states, should be led by the Philippine government and a majority-owned Filipino company that unequivocally recognizes the Southeast Asian country’s exclusive sovereign rights in the area.

Moreover, The Hague ruling on the South China Sea has made it crystal clear that China and the Philippines have no overlapping EEZs. Only in the Scarborough Shoal, which has been ruled as a nonexclusive traditional fishing ground, can it be argued that there is some legal room for resource sharing under the aegis of international law. In short, Duterte will likely have to amend the Philippine constitution and ignore key provisions of the Philippine-initiated the arbitration award at The Hague in order to push through with a JDA in the South China Sea.

Ultimately, this would legitimize China’s claims to almost the entirety of the precious resources in the contested areas. What is at stake isn’t only the Philippines’ territorial integrity, but also the fate of the world’s most important sea line of communications.

Image: Chinese President Xi Jinping (R) shakes hands with Philippines President Rodrigo Duterte prior to their bilateral meeting during the Belt and Road Forum, at the Great Hall of the People in Beijing, China May 15, 2017. REUTERS/Etienne Oliveau/Pool​