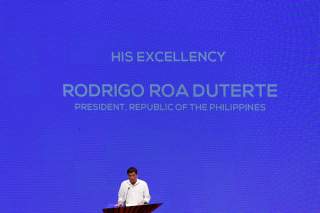 In recent months, Philippine president Rodrigo Duterte has seemingly abandoned strategic diversification in favor of “strategic leaning” towards China. To the Filipino leader, China is an indispensable geographical reality, which has to be accommodated with clear-eyed realism. He sees American primacy in Asia as a geopolitical anomaly, which will soon disappear from the regional landscape.

Amid festering disagreements with traditional partners over human-rights issues, Duterte has also come to rely on China as his main strategic patron in the international system. In fact, Beijing has been among the most vociferous defenders of Dutetre’s war on drugs, which has allegedly led to widespread human-rights violations, in the United Nations. Above all, Duterte sees China as a partner for national development, hoping to secure large-scale investments to overhaul the Philippines’ decrepit public infrastructure.

Thus, what began as a timely and sensible call for decreasing the Philippines’ century-old dependency on America has now morphed into flirtation with full strategic alignment with Beijing. Yet, upon closer look, what one discovers is nothing less than a high-stake contestation for the soul of Philippine foreign policy.

In stark contrast to Duterte’s China-friendly rhetoric, the defense establishment has been perturbed by the Asian powerhouse’ creeping incursion into Philippine-claimed waters in the South China Sea. Moreover, the Armed Forces of the Philippines (AFP) has gradually upgraded frayed defense relations with America, which has stepped up its efforts at curbing Chinese maritime revanchism.

In the economic realm, traditional partners have been the the primacy source of investments, capital and technology. During Duterte’s first year in office, Japanese investments in the Philippines were twenty times larger than of China. American investors beat China by a factor of five.

Meanwhile, the mainstream Philippine media, prominent statesmen and magistrates, and influential strategic thinkers have also remained highly critical of Duterte’s rapprochement with China. As for the Philippine public, America remains the most preferred international partner, while China is seen through the prism of threats and opportunities .

Duterte remains a highly popular leader. But he is not a king and, crucially, lacks the power to unilaterally decide the fate of the Philippines’ external relations, particularly vis-à-vis China and America. This is precisely why he has had to accommodate other veto-players, particularly the military, which has been bedrock of the Southeast Asian’s country’s alliance with America. The Philippines’ ‘China policy’ isn’t set in stone, but is instead the product of a fluid process of internal contestation and external reckoning.

Xi Must Be Obeyed

To be fair, the mayor-turned-president is largely responsible for international misperceptions about the Philippines. Almost two years into office, he has yet to embrace the rituals of statesmanship, including the abiding necessity for calibration and self-restraint in matters of diplomacy.

On matters of foreign policy, he often sounds more like a provincial mayor striking deals with other local governors rather than the head of a sovereign state operating within an intricate international system. He often reduces complex foreign-policy dilemmas into entertaining and simplistic narratives, which may appeal to his base, but confound even his most senior advisors.

Early this year, in a speech before Chinese-Filipino industrialists and businessmen, the Filipino president quipped, “If you [Beijing] want, just make us a province”. Among those in the audience was no less than Chinese Ambassador Zhao Jianhua, who welcomed the remarks with characteristic bonhomie.

Over the past two years, the Chinese envoy has spoken to the president more than any other foreign national. In fact, he has been among the most regular visitors at the Malacanang presidential palace, often called ‘the whisperer’—always caught speaking to Duterte in camera footage—by his detractors and envious diplomatic counterparts.

Duterte has rarely missed the chance to express his love and affection for Chinese President Xi Jinping. The Filipino leader has even suggested that for smaller countries such as the Philippines, it’s important to remain “meek” and “humble” in order gain China’s “mercy” and avoid a suicidal conflict in the contested South China Sea. To up the ante, Duterte has even suggested that China now serves as his de facto praetorian guard against potential coup plots at home.

According to the Filipino leader, Xi, on the sidelines of the Boao Forum in April, allegedly told him: “We will not allow you to be taken out from your office, and we will not allow the Philippines to go to the dogs.” Beijing has been characteristically mum on Duterte’s controversial statements, including his suggestion last year that China threatened to declare war if the Philippines insisted on its rights in the South China Sea.

Not short of drama, Duterte has accused foreign elements, namely the Central Intelligence Agency (CIA), of plotting to overthrow him in order to place his liberal opponents in power. The conspiratorial accusations have been flatly rejected by America.

Duterte’s mind-boggling statements, however, have been constantly contradicted by no less than the defense establishment and the broader intelligentsia-media complex in the country, which remains skeptical of China’s intentions.

“Your Armed Forces are always aware and will not renege on our beholden constitutional duties to protect our sovereignty and maintain our territorial areas [in South China Sea],” exclaimed Armed Forces of the Philippines (AFP) spokesperson Edgard Arevalo in late-May. The emphasis on “constitutional duties” is crucial, because it signals the military’s primary loyalty, which isn’t to the elected president, but instead to the Phlippines’ constitution. In recent memory, the AFP effectively unseated two charismatic presidents, Ferdinand Marcos (1986) and Joseph “Erap” Estrada (2001), when they were perceived to have lost legitimacy in the eyes of the Filipino people.

Duterte’s own defense minister, Delfin Lorenzana, has also been among the most vocal advocates of a more assertive Philippine policy in the South China Sea. Time and again, he has emphasized the importance of the Philippines’ defense alliance with America as an indispensable deterrence against domestic and international threats, while highlighting Chinese maritime assertiveness within both the western (South China Sea) and eastern (the Benham Rise) flanks of the archipelagic Southeast Asian nation.

Earlier this year, the defense chief, along with other senior officials, confirmed to me that Manila will move ahead with upgrading the Philippines’ airstrip and civilian facilities in the Thitu Island, a prized and contested land feature in the Spratly chain of islands. Ironically, China opposes the move, even if it has been engaged in a geo-engineering-on-steroids reclamation and militarization activities across the whole South China Sea.

In a sign of strengthening relations between the AFP and the Pentagon, this year alone saw two American aircraft carriers visiting Philippine ports to signal the endurance of bilateral maritime cooperation. During his April visit to the USS Theodore Roosevelt, Philippine army Lt. Gen. Rolando Bautista declared, “The Americans are our friends. In one way or another, they can help us to deter any threat [in South China Sea].”

This year’s Philippine-U.S. Balikatan exercises (May) also saw a 60 percent increase in number of American and Filipino troops in participation. Japan and Australia, which have deployed troops and warships to the Philippines in recent months, prominently features as observer partners. Crucially, the war games also saw the return of joint amphibious exercises in the South China Sea, not far from the Chinese-controlled Scarborough Shoal, which lies just above one hundred nautical miles from Philippines shores.

Recognizing the influence of the military, Duterte has repeatedly sought to win them over, whether through increased salaries, benefits, or outright appeal for understanding. In early-May, he gave a speech at an oath-taking ceremony with the Philippine military, where he tried to defend his foreign policy by stating, “It’s a play of geopolitics. And I’ll explain to you [military] why my attitude towards China [is like this].” The message is clear: Thanks to the enduring influence of the Philippine defense establishment, the Southeast Asian country’s policy towards China is far from final, and the alliance with America remains intact.

Image: President of the Philippines Rodrigo Duterte participates in the opening ceremony of the ASEAN Summit in Manila, Philippines November 13, 2017. REUTERS/Jonathan Ernst