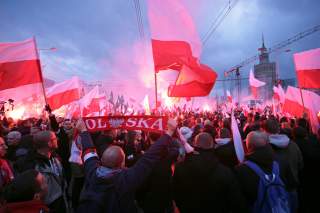 Ruta Vanagaite, the enfant terrible of Lithuania’s historical memory politics, has done it again: she has gone and cast doubt on yet another national hero in Lithuania by bringing up for public viewing some uncomfortable information about his past. When I caught up with her last Friday, she was in Brussels, fearing that being home in Lithuania might not be safe.

Vanagaite’s specific crime was to question whether the celebrated partisan Adolfas Ramanauskas-Vanagas, who Lithuanians honor for his struggle against the Soviet occupation, was an appropriate choice as a symbol for 2018—the year the nation will be celebrating the centennial of its original independence.

Vanagaite’s archival research showed that his story may be less neat than the official narrative suggested: he may not have been tortured in Soviet prisons as the official story claimed and may, in fact, have worked as a KGB informer. She also told me that the Wiesenthal Center believes that his unit may have participated in the murder of Lithuanian Jews during the Holocaust.

“If you are going to name a whole year after a person, the society should know everything about this person,” she told me. “Why should we hide that he was broken or forced to sign on with the KGB? We want only part of the truth, the heroic truth. It reminds me of Soviet times.”

Many Lithuanians had already had enough of Vanagaite with her 2016 book Our People. In it she, an ethnic Lithuanian and descendant of Holocaust perpetrators, wrote openly about her countrymen’s (and her family’s) role in annihilating Lithuania’s 220,000 Jews. She found herself on the receiving end of personal threats and disparagements, including accusations of being on the take from the Kremlin. Nevertheless, the book became a bestseller, suggesting that Lithuanians were interested in the information—even if they were not interested in having a public debate about it.

The latest episode, however, seems to have been too much even for most of her supporters. As a result of a public storm, Vanagaite’s long-term publisher Alma Littera severed its relationship with her, announcing that all her five books would be pulled off the shelves and pulped—including those books that have nothing to do with the subject. A patriotically-minded group filed a suit against her with the prosecutor general alleging slander and denigration of memory of a deceased person.

The developments in Lithuania are both symptomatic of what is going on in post–communist Eastern Europe and a warning sign for what may be ahead. Throughout the region, governments are turning to nationalist heroes from the World War II period who are lauded for their courage in fighting for their countries’ independence and hailed as martyrs persecuted by the Soviets.

The problem is that many of them are also tainted by collaboration with the Nazis. Viewing the Germans as potential allies in their countries’ bid for independence, many enthusiastically joined in some of the Germans’ worst crimes, including the Holocaust, and sometimes initiating their own ethnic cleansings.

Among the newly resurrected heroes are representatives of such odious organizations as Croatia’s Ustashe, which is implicated in brutal murders of Serbs, Jews and Gypsies; Ukraine’s OUN and UPA, which advocated for ethnically pure Ukraine and participated in the murders of Poles and Jews; and Lithuania’s militia, which carried out murders against the Jews of Lithuania and Belarus and served as concentration camp guards across the region.

These developments are part of the larger processes that have been unfolding in the region over the last several years. From country to country, governments have instituted agencies, also known as “memory ministries,” and tasked them with pulling out parts of national history that can help form new national narratives—a process that professional historians condemn as myth-making and politicization of history that is antithetical to free exploration of the past. Legislation instituting limitations on speech in an attempt to safeguard national honor has become another feature in the region. In the few cases where a debate about dark aspects of the past did take place, as in Poland after the publication of Jan Gross’s Neighbors, a reversal is now evident, as politicians condemn what they view as a culture of shame.

The fact that Russia uses these developments to score points in its own propaganda war further stifles debate. Moscow never tires of accusing its former vassals of antisemitism. As a result, people like Vanagaite are often viewed in the region as doing Moscow’s work. Some Ukrainian historians I’ve spoken with over time have told me in confidence that they preferred staying quiet over having the “Kremlin agent” label be attached to their name.

In a twist of irony that seems to escape those crafting memory policies, they seem to mirror the very Soviet approaches they claim to want to excoriate. In fact, they are very close to the highly ideological approach with which Russia today treats its own history.

Behind the region’s concerted effort to promote its nationalist heroes is a complex set of circumstances. They include the post–independence search for new identity and a perceived need to create new heroes to foster a sense of national pride. At the same time, it is likely a reaction to the West’s predominant narrative of World War II, which has the Holocaust at its center as a transnational and unifying symbol and a global icon that signifies the worst atrocity human beings can perpetrate against one another and that is, therefore, to be remembered so as never to be repeated.

The latter is a difficult issue in this part of the world. It is a narrative that demands an accounting for one’s dark past—a demand that the post–communist world was hardly equipped to meet when it first came into contact with it in the early 1990s. Within the borders of the Soviet Union in particular, the Holocaust had never been taught; the narrative of universal suffering at the hands of the Germans subsumed the unique tragedy of the Jews. When the Cold War ended and researchers began to pull out of the previously closed archives evidence that showed that some among the local populations in the post–Soviet states had been complicit in Nazi crimes, incomprehension and resentment ensued. Outright anger and resistance followed.

We are now witnessing the results of these processes, which are deeply frustrating and worrying for anyone who is familiar with the region’s history.

Instead of opening a debate about the past, a narrative of dual victimhood has taken root in the region. It posits that, in contrast to Western Europe, Eastern Europe suffered from both totalitarian regimes and that the communist one was actually the worse of the two. As a corollary to that, a hero narrative is presented, which tells the story of these nations offering valiant resistance to communism as an ideology that was alien to them and was imposed on them exclusively from the outside.

But these notions, however, are dubious simplifications, and some consider them an attempt to avoid responsibility for the Holocaust.

For the United States, this presents a tricky ticking time bomb of a problem. American diplomats tend to ignore this aspect of regional politics, considering it too messy and too “inside baseball” for outsiders to wade into. On a recent visit to Warsaw, President Trump chose to play along with it.

The nationalist march in Warsaw over the weekend showed the extent to which this has been a mistake—and an illustration of the trouble that may be awaiting the region in the future. If there is anything we can learn from Europe’s troubled twentieth-century history, it’s that once out, the nationalist genie is hard to put back into the bottle. To hear sixty thousand marchers in Warsaw calling for white Europe and for Holocaust of the Muslims is to reap the results of a prolonged flirtation with nationalism in the name of nation-building. It is also the first flower of a history being forgotten.

There is another lesson we can learn from European history, and in particular from the German experience: silence about the past doesn’t work. Sooner or later, the next generation begins to ask uncomfortable questions of their elders. The new generation of Eastern Europeans who grew up with the new versions of history will inevitably start doing the same as it comes in contact with the outside world.

In some ways, it is happening already. At a recent event in Lviv that I attended, Philippe Sands, whose popular history book East-West Street describes some troubling events that took place in war-time Lviv and was just translated into Ukrainian, said that young Ukrainians came up to him and said in disbelief that they didn’t know anything about those events.

Underneath official narratives, some in the region are beginning to understand this. Following the publication of Vanagaite’s Our People, Marius Ivashkiavichus, a well-known Lithuanian playwright, wrote a poignant column titled I Am Not a Jew, in which he appealed to his fellow citizens to grapple with the knowledge of what happened so as not to pass the “nightmare” on to their children. One day, he warned, “[our children] would look at us in amazement, asking us: “why didn’t you do this? Living for 25 years in an independent country, in freedom and without war—how is it that you didn’t find inner strength to find peace with your past, with your Jews?”