Economics Could Be the Key to Ending the Syrian Civil War 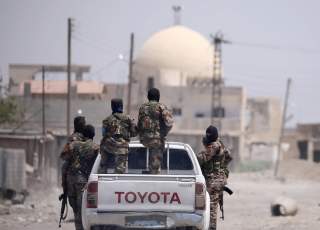 President Donald Trump’s early moves on Syria policy have had their virtues. He has gradually ramped up the military pressure against ISIS, building on efforts established in the last years of the Obama administration. Trump has also worked to reestablish a credible U.S. redline against chemical weapons use, and also, to begin a new dialogue with Russia as of his July 7 meeting with Vladimir Putin in Hamburg, Germany that led to ideas for small ceasefire zones. King Abdullah II of Jordan has helped establish one such zone in southern Syria and there is some hope that it could serve as a model for things to come. Trump has also wisely disengaged from the futile Geneva negotiation process that the Obama administration believed might create a new government of national unity; the reality is that, backed up by Russia and with considerable battlefield momentum in recent years, the government of President Bashar al-Assad isn't going anywhere anytime soon. Devolution of power, at least temporarily, to various regions and subregions in Syria is a much more promising concept than wholesale replacement of the central government in Damascus.

However, much more is needed. No single unified Syria strategy with a step-by-step implementation plan is plausible; the war is too messy and complex to chart a full path to its resolution at this juncture. But America needs more elements of leverage as we seek to set the conditions for creating a path to wind down the war. A key ingredient in such thinking is to use our collective Western and Arab economic leverage wisely and strategically to help autonomous zones as they emerge. The ultimate goal is to persuade Assad to hand the reins of power to a successor regime, partly of his own choosing but with far less blood on its hands, so that his own people and the country's main population belt can access the kind of reconstruction aid that will only be made available to them once he is gone. Rebuilding Syria will take upwards of $100 billion a year—the kind of money that Assad's allies simply do not have. Hence our opportunity for using economics as leverage.

A necessary prerequisite to the full use of such an economic strategy, to be sure, is greater battlefield success. Right now, the only areas ripe for the kind of subnational economic assistance we propose are in the Kurdish north. Militarily, the United States and allies thus must bolster training and arms transfers to carefully chosen allies on the ground to help friendly strongholds emerge and solidify with the capacity to defend themselves. This is not exactly the same as creating "safe zones" because we would not declare any such zones officially or pledge to defend them at all costs. There would be no repeat of Srebrenica, Bosnia or other such tragedies when safe zones were promised, yet not upheld. We would, however, inform Assad that any attacks against certain zones of the country would lead us to take proportionate reprisal measures, at times and places of our choosing, against his air forces or other assets. This strategy should start in the country’s east, where the ongoing defeat of ISIS is creating a vacuum of power that already Assad and Iran are seeking to exploit.

But at the same time, we should be marshaling Western and Gulf financial resources into a pool of money that could be used to support the military elements of strategy. Almost all of the world's major donors—EU nations, the United States, Canada, Australia, Japan, South Korea, the Gulf states and the World Bank group—would likely be inclined to support such an approach given their generally compatible strategic interests in Syria.

The first goal would be to expedite provision of humanitarian aid as sanctuary areas emerged. Over time, we would seek to provide aid to help these areas rebuild. As noted, Assad and his government would get no reconstruction aid until he relinquished power, but they could receive generous humanitarian assistance once the fighting ceased. This would give Assad some incentive to stop fighting and to devise a transition plan so that areas of the country he now controls could fully share in the reconstruction effort.

Everyone would have to compromise somewhat under this approach. Assad, Russia, and Iran will have to accept that Assad cannot directly rule major Sunni and Kurdish areas any longer. Nor will large-scale aid flow to the parts of the country under government control until Assad is gone, except from the relatively shallow pockets of Russians and Iranians. The United States and like-minded states will have to accept that Assad will in fact have a hand in helping choose a successor regime, as will Moscow. The transition will not be the product of a neutral negotiating process in Geneva, though we should condition our support for reconstruction aid on the new regime’s willingness to limit support for Hezbollah. The new government would have to include Sunni and Kurdish representation, of course, and would have to commit to protecting Christian and other minority groups. It would not, however, be a truly democratic entity.

Of course, this is still not a complete plan for Syria. We will still need to find a way to defeat the Al Qaeda–linked element (the Front for Conquest) around Idlib, ideally with Russian collaboration. We also need to ensure that the stabilization of post-ISIS eastern Syria does not turn into a free-for-all—or a quick win for Iran. There would be an important role for Turkey in this outcome.

But an overall strategy that makes our strategy more realistic, and less at direct odds with Russia's core interests, also holds greater promise of achieving these latter ends. By formally changing the removal of Assad into a second-order issue, and one to be achieved through financial suasion over time rather than direct military action, the strategic use of economic power can help achieve most or all of our main objectives in Syria today.