Ecuador and the Case of the Liberal Losers 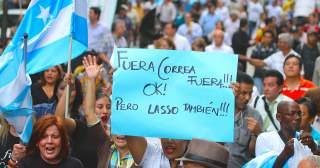 The recent poison gas attack in Syria, America’s stepped up military activities in Afghanistan, a presidential power grab in Turkey and the clownish bellicosity of North Korea’s “leader” have overshadowed an important development closer to home: left-wing populism’s slow-but-steady decline in the Americas. Just a few years ago left-wing populism was on the rise, embraced in one form or another by Argentina, Bolivia, Ecuador, Guyana, Honduras, Nicaragua, Paraguay, Venezuela and even Chile. Today, even the People’s World, the “news” organ of the Communist Party USA, concedes the “pink tide” may be receding.

The recent presidential vote in Ecuador confirms this.

The election pitted Guillermo Lasso, a former banker who campaigned on a free-market reform platform, against the aptly named Lenín Moreno, who outgoing President Rafael Correa had hand-picked to be his successor.

As strong-man presidents (right and left) often do, Correa made sure that Moreno won the early April election, a runoff contest between the two candidates who pulled the most votes in an earlier contest.

How could Moreno lose? Correa had all but destroyed Ecuador’s free press, turning the media into Moreno cheerleaders, and the election itself was plagued with “irregularities” that led to claims of fraud.

For example, the election tribunal’s computer system conveniently went down after early results seemed to point to a Lasso victory, which credible exit polls had predicted after the voting booths had closed. When the computer system was restored, lo and behold Moreno was firmly on his way to a win of more than 51 percent.

Other irregularities, most notably inconsistencies between some of the original election tally sheets and those showed by the electoral body, as well as episodes of police harassment against pollsters who put Lasso ahead the night of the vote, have thrown a dark shadow over the whole process.

Given Correa’s control of the election appeals tribunal (the TSE, or Supreme Electoral Tribunal) and the judiciary in general, we will never know whether Moreno was the legitimate victor.

What we do know this: at least half the country is desperate to get rid of left-wing populism and follow the path that Brazil and Argentina have taken in recent months, replacing governments closely allied with Venezuela with governments more in tune with the rule of law.

Correa’s decade-old government received more oil revenue than any other in the country’s history and used the money to establish an all-too-typical Latin American state based on patronage, corruption and the concentration of power.

The more than $300 billion that poured into the government’s coffers enabled Correa to throw money at his people, giving them the illusion of prosperity, or at least protection, for a while, which is the reason a large percentage of Ecuadorians continue to support the government. (Almost 40 percent voted for Moreno in the election’s first round, a proportion that probably also owed something to the wheelchair-bound candidate’s soft-spoken personal history as a symbol of the disabled).

But, of course, the price of oil went down and the mirage evaporated. Ecuador’s economy came to a stop in 2015 and shrank in 2016. It is barely expected to grow this year.

Moreno has signaled that he’s ready to turn the page from Correa’s confrontational politics and adopt a more friendly attitude towards the opposition and the country’s weakened institutions, such as business and the press. We will see.

For now, it is important to note that millions of Ecuadorians stand ready to push their country in the direction of globalization and free markets.

If Moreno tries to prolong Correa’s socioeconomic policies and political authoritarianism, not even the government-controlled electoral system will be able to ensure continuation of the regime. He will be handing almost certain victory to the opposition in the next election.

Alvaro Vargas Llosa is a senior fellow with the Independent Institute, Oakland, Calif. His latest book is Global Crossings: Immigration, Civilization and America.