Egypt Can't Make Up Its Mind about Iran's Nuclear Program 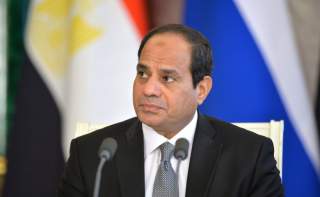 In discussing the reaction to the Joint Comprehensive Plan of Action, referred to by the Persian acronym Barjam, predicting the next move of key regional powers—notably Egypt—has been particularly difficult for proliferation scholars. As mentioned in my previous analysis, Israel and Saudi Arabia offered guarded acceptance of the deal, but reserved the right to reevaluate their decision should Iran fail to comply with the deal.

Israel has used an array of strategies to roll back Iran’s program, but it has not launched a preemptive attack on Iranian facilities because of intense divisions between the civilian and military leadership and a failure to secure American support. Saudi Arabia, a country that could have been expected to launch its own nuclear military program, according to the security model of proliferation, seems to have taken a low-key approach. The kingdom, under pressure from the United States, reluctantly accepted the JCPOA, but has worked on creating a hedging strategy should Iran abrogate the agreement.

Like Israel and Saudi Arabia, Egypt offered guarded acceptance, but reserved the right to reevaluate its decision should Iran fail to comply with the deal. Egypt has had a stormy relation with the Iranian regime. The two countries broke off diplomatic relations in 1979 and, despite several attempts at reconciliation, notably during the period of President Hosni Mubarak, they only resumed relations under President Mohamed Morsi and his Muslim Brotherhood in 2011. President Abdel Fattah el-Sisi, who replaced Morsi in 2014, has been much more critical. He has blamed Tehran for aiding the violent Muslim Brotherhood resistance and for helping to destabilize the Sinai Desert through the Iran-aligned Hamas forces in Gaza. Echoing Saudi grievances, Egyptian officials described Iran’s involvement in Yemen as not helpful.

Egypt’s attitude toward Tehran’s nuclear project has differed from that of Saudi Arabia and Israel in ways that make it complex and occasionally contradictory. Egypt’s ambivalence toward nuclear energy in general and nuclear weapons in particular goes a long way toward explaining this complexity. Gamal Abdel Nasser, who became president in 1954, was among the first Middle East leaders to consider nuclear power. He created the Egyptian Atomic Energy Commission in 1954, which is currently known as the Atomic Energy Authority, and negotiated a number of agreements with the Soviet Union, under which Egypt received the ETRR-1 two-megawatt light-water research reactor, located in Inshas.

After Israel unveiled the Dimona reactor in December 1961, Nasser stepped up its nuclear rhetoric. He announced that should Israel acquire nuclear weapons, “we would secure atomic weapons at any cost.” Indeed, Egypt tried to buy a heavy water–moderated reactor capable of producing plutonium, an alternative to the more arduous process of enriching uranium to weapon grade used in nuclear weapons. Reports at the time indicated that Nasser wanted the Soviet Union, China or India to supply Egypt with nuclear weapons. In line with his growing pan-Arabism, Nasser envisioned a pan-Arab nuclear force led by Egypt. The devastating loss in the Six-Day War in 1967, however, put Egypt’s nuclear ambition on pose.

Neither President Anwar Sadat nor Hosni Mubarak, who succeeded him in 1981, were nuclear enthusiasts. As a matter of fact, the Mubarak administration was even lukewarm toward civilian nuclear technology. After a number of failed attempts, following the 1986 Chernobyl nuclear disaster, negotiations to buy a nuclear reactor were terminated. Instead, in 1992 Egypt bought the ETRR-2 twenty-two-megawatt light-water reactor, which operates in the Nuclear Research Center in Inshas. According to the Nuclear Threat Initiative, Egypt experimented with uranium conversion and also the reprocessing of uranium and thorium. A storage facility in Inshas is said to contain three kilograms of uranium metal, some sixty-seven kilograms of imported uranium tetrafluoride, 9.4 kilograms of thorium compounds, one kilogram of uranium rods enriched to 10 percent, and very small quantities of domestically fabricated UF2, UF3 and UF4. Egypt imported most of the materials before joining the NPT, but failed to report them at the time. In addition, Egypt carried out experiments in nuclear reprocessing in a two-stage process. First, natural uranium was irradiated in its ETRR-1 and ETRR-2 research reactors. Second, the irradiated material was dissolved in nitric acid, which, as a rule, is used to recover plutonium-239. Nuclear reprocessing is controversial, because plutonium-239 is fissile and can be used to create an atomic bomb. Egypt denied that the process involved plutonium, but the IAEA cited Egypt for failing to declare the experiments in 2004.

Having decided that acquiring nuclear weapons was prohibitive for economic and political reasons, Egypt, which joined the NPT in 1980, decided to push for a Middle East Nuclear-Free Zone. Mubarak embraced this idea and made it the so-called WMD-Free Zone, the core of Egyptian nuclear policy. The subsequently renamed Middle East Nuclear Weapons–Free Zone (MENWFZ) movement became a major irritant in relations between Cairo and Jerusalem. Israel has not joined the NPT, and never acknowledged its arsenal. Known as ambiguity (amimut), this posture was a low-cost strategy to develop nuclear weapons without the censure of the international community. As a matter of fact, in the 1970s, the United States committed itself to shield Israel from pressure to join the NPT. But MENWFZ challenged this arrangement and the Egyptians pushed the United Nations to take up the initiative at the 1990 General Assembly meeting. During the 1995 NPT Review Conference, Egyptian representatives agreed to vote for the extension of the treaty in return for a promise to convene a separate meeting to discuss the Free Zone. Mohamed ElBaradei, the Egyptian diplomat who helmed the IAEA between 1997 and 2009, strongly encouraged this move. In his view, Western countries engaged in rank hypocrisy by turning a blind eye to Israel’s undeclared nuclear arsenal and its attack on the Syrian reactor in 2007, while harassing Iran. The nuclear chief was pleased with Egypt and other states in the Arab group that objected to the American drive to impose sanctions on Iran.

He also supported Egypt’s continued efforts to convene a special conference on a nuclear-free zone, which was backed by Tehran. During a high-profile visit to Washington in September 2006, former president Mohammad Khatami called for denuclearizing the Middle East. On September 17, 2009, Egypt and Iran scored a victory when the General Assembly of the IAEA passed a resolution calling on Israel to join the NPT and open its program for inspection. The companion resolution was a first-of-its-kind appeal for a Nuclear Weapons–Free Zone in the Middle East.

Egypt’s behavior was meant to constitute a point of misdirection—“the more Iran pursues nuclear capabilities, the more Cairo rails against Israel’s Bomb.” But for the Egyptians, the attack on the Syrian reactor in 2007 was conclusive proof of the double standards that ElBaradei had railed against. Al Ahram denounced “the synchronized silence of the Arab world” and castigated other countries for ignoring the attack on a sovereign country. Egypt registered its protest by voting against sanctions on Iran during the 2009 meeting of the IAEA Board of Governors.

As the leader of the 118-nation Non-Aligned Movement and the New Agenda Coalition—a group of eight influential countries, including Brazil and South Africa—Egypt has occupied a special position in shaping the nuclear agenda. Teaming up with Iran, it compelled the 2010 NPT Review conference to call for a special meeting in 2012 to discuss a regional WMD ban. Finland agreed to host the initiative, but, in November 2012, the United States intervened to postpone the gathering. America’s maneuvering outraged Egypt, where the MENWFZ has commanded substantial public support. According to a 2015 poll, 61 percent of the Egyptian public supported Iran’s right to nuclear weapons, even as 87 percent said Egypt should be developing its own arsenal. With 65 percent of the respondents lauding Morsi’s decision to reestablish diplomatic relations with Tehran, the poll also revealed Iran’s growing popularity in Egypt. After being declared in compliance of the NPT in January 2016, Iran has joined Egypt to push for a new conference, a stand that found support in the European Union and beyond.

Even as other major regional powers were signaling their opposition to the nuclear deal in the spring of 2015, the Egyptians renewed their push for a NWFZ, in conjunction with the debate about the Comprehensive Nuclear Test Ban Treaty. During the May 2015 NPT Review Conference, Egypt urged a new deadline of March 2016 for a special MENWFZ conference, only to be vetoed by the United States. At the time, Tehran, which was anxious to see the JCPOA negotiations through, did not support Egypt. However, there are strong indications that Iran, which is said to be reinstated as a Non-Nuclear Weapons State within the NPT, would team up with Egypt to push for a nuclear-free zone in the Middle East. Mohammad Javad Zarif, the Iranian foreign minister, said as much in a Guardian op-ed entitled “Iran has signed a historic nuclear deal—now it’s Israel’s turn.” Ambassador Badr Abdel Ati, the spokesman for the Egyptian Foreign Ministry, stated: “We assess the agreement within the framework of Egyptian foreign policy’s general direction, which believes in a principal goal that is for the Middle East to be free of nuclear proliferation.”