Egypt's Economy Is in Big Trouble 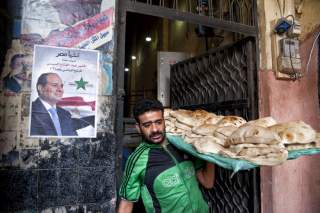 Three years ago this summer, Egyptians took to the streets en masse to vent their frustration at the government of then president Mohamed Morsi. The source of their discontent was the widespread economic stagnation and ideologically driven policies that came to punctuate Morsi’s Muslim Brotherhood–dominated government. The result was nothing short of a counterrevolution, as Morsi was ousted by the country’s powerful military in an almost-coup led by his then minister of defense, Gen. Abdel Fattah el-Sisi.

But now, Egypt’s post-Islamist government is facing a remarkably similar situation. Beset by worsening economic conditions and rising discontent among the country’s youth, the Egyptian regime, now headed by Sisi, is decidedly on the skids—with potentially dire consequences for the country, and the region as a whole.

Tourism, the lifeblood of the Egyptian economy, remains lackluster, clocking in at just a fraction of what it was during the reign of former president Hosni Mubarak (1981-2011), and lower even than levels witnessed under Morsi (despite the chilling effect of the latter’s draconian policies on everything from the consumption of alcohol to bathing attire).

The culprits are legion, among them mounting instability in the Sinai Peninsula and the very public downing of a Russian jetliner over Egyptian airspace by the Islamic State terrorist group this past October. The cumulative impact, however, has been nothing short of devastating.  According to Egypt’s Al-Ahram newspaper, overall tourism declined by 15 percent in 2015, taking with it more than a billion dollars in badly needed government revenue.

Life for ordinary Egyptians, meanwhile, is steadily becoming more expensive. The national inflation rate has nearly doubled since last fall, and is currently estimated at 15.5 percent. Prices for commodities such as food and beverages have risen by one-third or more during that time, triggering a government effort to subsidize some staple goods (such as sugar, rice and meat).

That, in turn, has only accelerated the depletion of the country’s already dwindling currency reserves. Between mid-2007 and the end of 2010, official reserves averaged nearly $33 billion. Today, the figure is less than half that: some $15.6 billion as of this July. The trendline is unmistakable. Simply put, Egypt’s government is eating itself in order to stay in business.

These dire economic conditions have been compounded by equally grim societal ones. Roughly 40 percent of Egypt’s nearly ninety-million-person population is between ten and twenty years old, and an uncomfortably large segment of this cohort is at loose ends. As Brookings scholar Adel Abdel Ghafar noted in an important policy paper this summer, overall youth unemployment in Egypt stands at 30 percent—more than double the national unemployment rate of 12.8 percent. Moreover, Abdel Ghafar’s research shows, the more educated the Egyptian, the more difficult it is for him or her to find work. The unemployment rate for university graduates is a whopping 34 percent, compared to just 2.4 percent for youth “with less than primary level education.”

In a region where the most dangerous animal in the ecosystem is the unemployed young male, those figures are sure to send a shudder down the collective spine of Egyptian authorities. And there’s certainly good reason for concern. Egypt’s unemployed youth, if not engaged and occupied, could turn into a valuable force multiplier for the various Islamist challenges now arrayed against the state, from an increasingly alienated and radicalized Muslim Brotherhood at home to Islamic State franchises in both the adjacent Sinai and neighboring Libya.

But this nightmare scenario hasn’t spurred authorities in Cairo to follow through on serious systemic reforms. A recent assessment by the Atlantic Council noted that a significant portion of the changes pledged by Sisi upon taking power in June of 2014—from reforming subsidies to diversifying the country’s energy sources—are still very much works in progress.

Instead, Sisi’s government has increasingly pinned its hopes on an international bailout—first from international institutions, and then from wealthy Gulf monarchies. This strategy has worked, at least so far.

In August, the International Monetary Fund announced that it had reached agreement with Cairo over a $12 billion package designed to stimulate the economy and increase investor confidence. But this is simply a temporary measure—and one that, if recent history is any indication, will be squandered on showy but ultimately fruitless national projects. Meanwhile, the trends cited above can be expected to continue to frighten off exactly the kind of investment that Egypt needs to turn its economy around.

Which is why the Bloomberg study concludes that “Egypt can once again be a place worth investing in -- but before that happens, a lot will have to change.” What it fails to note, however, is that such change needs to happen very soon. Otherwise, Sisi’s government could well suffer the same fate as its predecessor, and the country could once again descend into chaos.