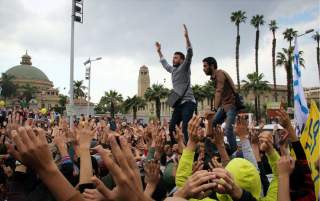 It all looks so familiar. Nearly four years after toppling Hosni Mubarak, crowds returned to Cairo on Saturday to protest the ex-president’s acquittal over causing 239 protesters’ deaths during the January 2011 revolution. With Mubarak’s successor Abdel-Fattah al-Sisi curtailing liberties to an extent Mubarak could only dream of, the grim conclusion is bare: Egypt has come full circle, only this time it’s worse.

Then as now, the mantra is the same: “The people want the downfall of the regime.” So too is the lexicon: water cannon, tear gas, Maspero and naturally, Tahrir. Admittedly, Saturday’s protest was minuscule compared to its predecessor: perhaps 2,000 people, compared to at least 300,000 four years prior. An estimated 85 arrests were made, instead of thousands last time around. And one person was killed, as opposed to at least 800 in 2011.

And yet this time, Egyptians arguably have more to protest about.

To be sure, the three decades under Mubarak were no garden party. Tens of thousands were detained under an emergency-law regime that had governed Egypt virtually uninterrupted from the country’s disastrous 1967 war with Israel (it was finally lifted after Mubarak’s resignation). Demonstrations and non-approved political movements were banned, torture was systematic and citizens imprisoned at the government’s whim. During the final years of Mubarak’s rule, authorities were estimated to be holding 5,000 to 10,000 people without charge.

But look at Egypt today. Over the last 16 months — since the army removed Mubarak’s elected Islamist successor Mohamed Morsi amid widespread unrest — the government has arrested at least 40,000 people. And although under Mubarak, the Egyptian press was tightly circumscribed, the Sisi government has cast its net over international media as well. Three Al Jazeera journalists, including the veteran Australian newsman Peter Greste, have been imprisoned for “spreading false information and supporting a terror group.” Already having been incarcerated for a year, he faces at least seven years more behind bars (Sisi has, however, dangled the possibility of an early pardon.) Three weeks ago the editor of the venerable French monthly Le Monde Diplomatique was detained in a Cairo cafe for daring to talk politics with local counterparts.

In the Sinai Peninsula — where an insurgency has raged since Mubarak’s ouster, and particularly since Morsi’s — the government has reinstituted the hated emergency law and applied a 5PM curfew. To curtail arms smuggling, the state has razed or evacuated a kilometer-wide swath of Rafah — a city straddling Sinai and the Gaza Strip. The promised compensation for evacuated families has been slow to nonexistent.

Sisi supporters argue that the Islamist threat justifies a firm hand. They’re right. The Brothers are a cultish movement with reactionary objectives for Egypt and the world. Whether and to what extent they should be included in Egypt’s national conversation is a question that defies easy answers. In Sinai, meanwhile, near-daily attacks have killed more than 500 servicemen, and the violence is increasingly spreading to the mainland as well (the Brotherhood disavows any link to the Sinai violence, but Cairo disagrees).

As Egypt returns full circle to authoritarianism, the United States finds itself in a bind. On the one hand, Washington doesn’t want to be perceived as giving assent to the regime’s heavy-handedness. On the other, America is desperate to maintain a working relationship with a country that is home to one-quarter of the world’s Arab population and which it continues to view as a linchpin of its regional interests.

During the Cold War, the prospect of American patronage and largesse was enough to lure Egypt from the Soviet camp and make it the first Arab state to bury the hatchet with Israel. Now, energy-rich Gulf states that share Cairo’s ire for Islamists are offering it aid packages that cash-strapped Washington can’t afford.

Worse, erstwhile U.S. allies in the region — from Riyadh to Ramallah, Cairo and Jerusalem —fear America has lost the wisdom or even the will to lead. During Hamas’s summer war with Israel, Egyptian and Israeli officials hammered out their own ceasefire proposals, leaving Washington sidelined (U.S. officials reportedly learned of the final ceasefire deal on Twitter). In off-the-record conversations, high-level Egyptian officials have admitted that relations with Israel — a country which despite the peace treaty, most Egyptians despise — are better than those with Washington.

America no longer has the financial muscle to buy Egyptian loyalty, but it does still boast the world’s best military hardware. Washington’s decision last week to finally release long-delayed Apache helicopters to Cairo was correct — if Egypt has the tools to confront armed extremists, it may rely less on blanket arrests of anyone sporting a beard or carrying the wrong literature. Suspending or reducing aid to Egypt, as some members of Congress have suggested, is itself a non-starter, and will only hasten America’s slide to irrelevance in Egypt.

For America to have any hope of prodding Cairo in a less authoritarian direction, it will have to regain some direction of its own. Washington must show it intends not to flee the world’s most volatile region, but to shape and even lead it.

Egypt’s revolution has come full circle, and its people face dark days ahead. The least America can do is try to keep it from the abyss.

Oren Kessler is deputy director of research at the Foundation for Defense of Democracies.