An Eighth and Final Year 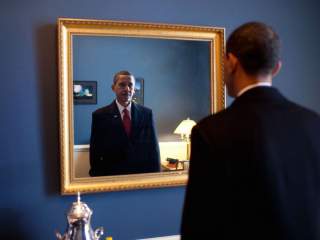 President Obama enters his final year in office at a time of rising conflict worldwide and deepening uncertainty about the security of the U.S. homeland. Public confidence in his presidency remains static and low at a time when anxiety about terrorism is at its highest since 2001.

This public mood is in sharp contrast to his inauguration. Entering office in 2009, Obama seized on the desire to shift away from almost a decade of costly war in the Middle East and Afghanistan and refocus U.S. efforts to domestic challenges and to the Pacific, where America faces a rising geopolitical and economic competitor in China. In contrast to his Republican challenger, John McCain (a celebrated veteran with impeccable national security credentials) and his primary opponent, Hillary Clinton (who voted to authorize the Iraq War), Obama rode into power as the candidate who best understood the public’s desire for a different course after his predecessor’s extensive overseas adventures and commitments.

Skeptical of the utility of military force, Obama prioritized active diplomacy and multilateral engagement over military force to address global challenges. He narrowed both the scope of the “War on Terror” to Al Qaeda and its affiliates and the methods employed to so-called ‘light footprint’ options, including Special Forces and drones. When the President did employ military force (in Libya, in Afghanistan and against Islamic State), it has often been poorly thought out and executed.

The president also came into office having concluded that America’s future is better served by investing in the Asia Pacific and in Latin America, instead of serving as the policeman of the greater Middle East. By taking a longer-term view, Obama was ill-prepared for the challenges of the present. Event after event in the Middle East seems to have caught him off guard. In favor of pragmatism over strategy, the White House became fixated how the media cycle viewed each action he took. As a result, Obama spent more time reacting to crises than pro-actively addressing them.

Out of Step with the American Public

At the end of his presidency, Obama finds himself out of step and out of touch with the American public. While the president has tried to argue that his approach in confronting threats is one that is steering the country on the right course, numerous opinion polls underscore how the majority of the public has lost faith in their commander-in-chief’s response to national security challenges. Obama has failed to convince the public that his long-term bets, ranging from the Iran deal to climate change, are better bets than more robustly focusing on present challenges such as ISIL.

The majority of the candidates for the presidency in 2016 are more hawkish and more comfortable with taking a muscular position to advance America’s national interests. From Hillary Clinton to Marco Rubio, their foreign policy remarks have focused on how they would more robustly address global challenges including ISIL and Russia. There’s practically a bipartisan consensus that the next president will need to try to alter President Obama’s current course.

In his final year in office, Obama faces the challenge of not being written off as a “lame duck” president as the American public focuses on who will lead the country in 2017. At present, the president and his advisors have given no indication that he’s ready to divert course from his current policies beyond making small tactical adjustments.

If Obama can endure the low poll numbers, the president will likely resist making any major shifts in his foreign policy. Instead, the White House will focus on consolidating the president’s major gains to date: the Iran deal, the Paris climate agreement, the TPP trade agreement and his opening to Cuba. These ‘wins’ are critical to his legacy and a validation of his foreign policy approach.

The president will also likely focus on transitioning current conflicts to his successor. Obama will continue to doggedly pursue a low-resourced anti-ISIS strategy, barring a major attack on the U.S. homeland. He will hope that the Vienna talks on Syria will continue to the end of his presidency and that his successor can bring them to a conclusion. If an agreement is reached, it would be a late-term validation in his view of his Syria policy. A settlement in Libya, too, will likely be kicked down the road.

In spite of these wishes, Obama may be forced to become a late-term wartime president. As his predecessors discovered, the final months of a presidency often hold surprises. The following foreign policy challenges may cause him to take actions in 2016 he never intended.

Afghanistan: The fragile security gains that Obama confidently assumed would hold are presently in tatters. Obama’s concession earlier this year that he would have to postpone his timeline of withdrawal of combat forces underscored how fragile America's position in Afghanistan presently is. Entering 2016, the Taliban is now surging while Al Qaeda is building a deepening footprint in the state. If the current U.S. force commitment and Afghan security forces can’t reverse these trends, Obama may be forced to invest more militarily in the conflict.

Syria: The civil war continues to tear at the region’s stability and the Vienna negotiations look to last well beyond Obama’s tenure. As intractable as the conflict is, the president has remained wedded to the belief that a deeper role for Washington would have only exacerbated the situation. However, if the Vienna talks fail or if Jordan or Lebanon’s stability changes, Obama may be forced to take more action to support the armed and political opposition. If Assad continues to use chemical weapons, Obama may be forced to revisit his “red lines.” The president also can’t fully anticipate what his regional partners may do if the conflict drags on longer; let alone potential points of conflict with Russia in Syria. Europe’s growing refugee challenge may also precipitate the need for a more robust response.

Iran: Tehran’s ballistic missile test raises stark questions about the sustainability of the nuclear agreement. Members of Congress are already calling for keeping in place sanctions that are supposed to be lifted with the deal’s implementation this spring. By proposing new sanctions on Iran for its missile program, Obama risks derailing his deal, but at present, he has no choice politically to stave off congressional action that could endanger the deal altogether. How will Iran react to such sanctions? Will Obama be able to keep the deal intact before he leaves office if Iran continues to try to game the deal? If the deal falls apart, will the president have to contemplate the use of military force on Iran’s nuclear program? The Iran deal is far from secure and Obama will focus his last months in ensuring that this centerpiece of his foreign policy legacy doesn’t fall apart.

Russia: Moscow poses a deepening challenge to the United States globally and Russia’s intervention in Syria is partially a byproduct of a perceived decreased U.S. role in the region. Will the president be forced to confront Putin in the Middle East in 2016 as President George W. Bush weighed whether he should do the same over Georgia in 2008?

ISIS: The president sought to bring to closure his predecessor’s intense focus on the “War on Terror.” The killing of Osama Bin Laden in 2011 and his extensive use of the CIA’s drone program to kill senior members of Al Qaeda “central” and its worldwide affiliates began building public confidence that the threat of Islamic extremism was on the decline. However, ISIS’s emergence in Syria and Iraq and its growing worldwide brand caught the president off guard. The attacks in San Bernardino and in Paris illustrate how this group can either inspire or directly execute attacks in the United States and Europe. Obama’s bet on employing a ‘light footprint’ approach to this challenge has not reaped many positive dividends so far.

As well, the U.S.-led air campaign against ISIS has yet to produce the results the president seeks. For example, the capture of Ramadi took seven months and much of the city remains in perilous condition. Mosul and Raqqa may or may not be captured by the end of his presidency. Obama has yet to fully address the global challenge that this group poses. He continues to underestimate the appeal of Islamic extremism globally. If there’s an attack on the homeland or on U.S. interests by ISIS, Obama may be forced to take more robust military action against the group.

The president, then, faces a critical final year in office. Obama may think his legacy is best secured by doubling down on his current foreign policy wins. However, if he doesn’t address these challenges, Obama may be remembered more for the inaction he took during his presidency than the actions he did take.