Elizabeth Warren Wants A Nuclear No First Use Policy, But It Won't Be Easy to Implement 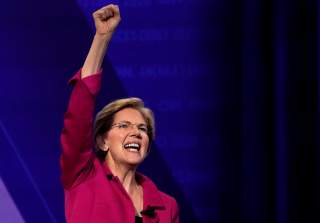 While President Donald Trump boasts about the “tippy top” shape of the U.S. nuclear arsenal, Senator Elizabeth Warren (D-MA) has a much more reasonable plan for American nuclear weapons, outlined in her co-sponsored fourteen-word bill that aims to radically alter the conditions under which the United States can use nuclear weapons. The bill (S. 272/H.R. 921) reads simply: “It is the policy of the United States to not use nuclear weapons first.” The idea—called No First Use (NFU)—has been around since the Cold War, but it has never officially been U.S. policy.

If President Warren were committed to adopting this sensible strategy, she wouldn’t be the first to make the attempt. Both Presidents Bill Clinton and Barack Obama tried—but failed—to incorporate NFU into their Nuclear Posture Reviews (NPR), the document that defines an administration’s official outlook on nuclear weapons. If Warren wants an NFU, she should look to these Democratic presidents’ pasts to learn how to make her lofty goal achievable.

President Clinton showed an early interest in nuclear reform with his appointment of Les Aspin as Secretary of Defense. Aspin had formerly been the chairman of the House Armed Services Committee, where he had championed the cooperative threat reduction program and argued that “a world without nuclear weapons would actually be better.”

In early meetings, Aspin as well as the Assistant Secretary of Defense for Nuclear Security and Counterproliferation, Ashton Carter, pushed for those writing the NPR to consider options—like the total elimination of nuclear weapons and the adoption of NFU. But the military—which was primarily in charge of the review—had little interest in changing U.S. nuclear posture. When experts gave presentations to the NPR committees and recommended reforms, the military reportedly responded by looking “puzzled beyond redemption.” Said one official: “We certainly weren’t about to invite any weirdos from the ACDA [Arms Control and Disarmament Agency]” to the NPR meetings.

With this as the prevailing attitude, it was clear that without aggressive, hands-on leadership by the Clinton administration, reform wasn’t going to happen. General Charles Horner later wrote of the process: “Don’t ask the Pentagon to change the Pentagon. I think it has to come from the outside. The Pentagon won’t recognize the truth. The executive branch has to provide leadership.” But in this case, the executive branch didn’t.

Civilians at the top levels, including President Clinton, took a backseat on the NPR. There were other, more pressing, security concerns, and Clinton was generally more focused on domestic issues to start with. Without top-down leadership, Aspin and Carter—for all their good intentions—were unable to exert much control over the NPR process or final product.

Ultimately, Carter tried a last-ditch effort. Sensing the reluctance of NPR committees to adopt any real changes, Carter resorted to creating his own separate, parallel committee, headed by members of his own staff. However, after the commission presented its findings, Carter was pulled into a secret meeting at the Pentagon, where the military establishment told him he should not interfere any further with the NPR. Then, at the end of 1993, Aspin was asked to resign from his office, and it was clear then that the hopes for radical policy change were over.

The Obama Administration: Too Many Cooks

Unlike Clinton, Obama took a very active role in the construction of his NPR. The committees for the 2010 NPR were interagency, with members from the Departments of Defense, Energy, State, and others. The size and complexity of the project, therefore, demanded executive leadership, and in turn, both President Obama and his Secretary of Defense, Robert Gates, took active roles in organizing the committees and steering the direction of their conclusions. Obama even reportedly edited the final text of the NPR himself.

In the end, though, leadership wasn’t enough. The Obama Administration’s NPR was wracked by the tension between realists and idealists. On one hand, Obama had promised to bring about major nuclear reforms, such as committing the United States to the total elimination of nuclear weapons. On the other hand, the military continued to press instead for the document to focus on pragmatic, traditionalist approaches to problems like nuclear terrorism and proliferation. Even Obama’s own national security personnel disagreed amongst themselves. One history of the process explains that it “was almost immediately bogged down by infighting among the senior officials involved. The final product was the result of 150 meetings, including 30 convened by the National Security Council, and repeated interventions by Obama himself, all of which constituted a bureaucratic round-robin that revealed the inability to reach consensus.”

In the end, the review was caught up—and reforms were gutted—in these internal conflicts. In fact, the review was not even released until months after its original deadline. The final draft of the NPR reflected stalemate. There would be arsenal cuts, but slowly. Disarmament would be balanced by increased funding for nuclear modernization. All these compromises made the NPR ambiguous, difficult to interpret, and unsatisfactory to many reformists and traditionalists alike. For example, the NPR’s approach to nuclear use is ambiguous and sometimes contradictory. The role of nuclear weapons would be reduced and the United States would commit not to “use or threaten to use nuclear weapons against non-nuclear weapons states that are party to the NPT [Nonproliferation Treaty] and in compliance with their nuclear non-proliferation obligations,” except that protection could potentially be revoked if those states used chemical or biological weapons. At the same time, nuclear first use would still be acceptable against “states that possess nuclear weapons and states not in compliance with their nuclear non-proliferation obligation” if such states posed a conventional, chemical, biological, or nuclear threat to the United States or any of its allies.

In many ways, the policy was a moving target. For example, Secretary of Defense Robert Gates claimed the United States “would not use nuclear weapons against a non-nuclear state that attacked us with chemical and biological weapons”—even though the NPR had explicitly reserved that right. After the NPR’s release, the public discussion focused on how exactly the United States would decide when nuclear use was allowed. Charles Krauthammar wrote: “Imagine the scenario: Hundreds of thousands are lying dead in the streets of Boston after a massive anthrax or nerve gas attack. The President immediately calls in the lawyers to determine whether the attacking state is in compliance with the NPT.” Former CIA director and member of the Strategic Posture Commission James Woolsey caustically remarked: “If, under Obama’s new policy, an ally is attacked by biological weapons, the United States is going to have to do a study to first see if whoever attacked is observing the NPT.” Others suggested it wouldn’t be the United States running such a study at all, but an international body. With all this complexity, one thing about the new policy was clear: An NFU policy it was not.

Lessons for the Next President

If the next president wants to implement NFU, what should they do differently? First, an improved NPR process would involve hands-on, consistent leadership from civilian executives. Second, the next president will need to bridge differences of opinion between traditionalists and those who are more reform-minded. That means choosing civilian leaders of the NPR effort who have and commit to building a good rapport with the military establishment and military leaders who are receptive to new ideas while using their expertise to ensure that any adopted policies are beneficial, clear, and implementable. In addition, it would be best if the NPR committees were composed of a small selection of the most qualified officials, ones with the resolve and expertise to seriously—and carefully—investigate new policy ideas and revisit old ones. Finally, the next president must commit to a singular, comprehensible vision. While some degree of compromise is always essential, compromise that goes so far as to create unwanted ambiguity is something to be strictly avoided. If the next president—Warren or otherwise—can successfully manage the process of writing an NPR, they will have the opportunity to radically reshape the role of nuclear weapons in American politics.

Lauren Sukin is a Ph.D. Candidate in the Department of Political Science at Stanford University.