An Emboldened Iran Has Begun to Seek out the Geopolitical Spotlight 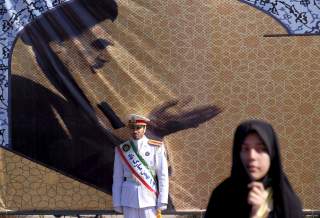 Iran’s political elites are endorsing the assassination of former Yemeni president Ali Abdullah Saleh and signalling that Tehran’s expansionist aims in the region are widely supported across the Iranian political spectrum.

The assassination, presumably carried out by Iranian-backed Houthi rebels on December 4, was condoned by Iranian president Hasan Rouhani, the chief commander of the Islamic Revolutionary Guards Corps, Mohammed Ali Jafari, and the editor-in-chief of Kayhan, a newspaper close to Supreme Leader Ali Khamenei. In referring to the killing, Jafari went as far as to declare that the benefits Iran sees in the aftermath of Saleh’s assassination are a step toward fulfilling the goals of the 1979 Islamic revolution. “Iran’s allies in Syria, Yemen and Bahrain have taken inspiration from the experiment of the Iranian revolution,” he was quoted on the website Tasnim, a news agency close to the IRGC.

Ali Akbar Velayati, a long-time confidant of Khamenei remarked: “The Saudi Emirati conspiracy (after the Saleh assassination) has failed in Yemen. The Yemeni people have resisted for two years Saudi barbaric bombing.”

This overarching consensus among all factions within the political system is a departure from Iran’s public face on regional affairs. In the past, the president and foreign minister generally offered more measured opinions and reactions on issues regarding violence and extremism associated with Iran and its proxies in the Middle East. But a combination of factors converging at the same time have shifted Iran’s posture. The regime has chosen to put forward a united front and no longer believes it is in its interest to either downplay its support for Shia militias and societies in the region or to renounce violence that works to its strategic advantage.

There are other factors that are also contributing to Iran’s changing calculation: The key military role played by the Islamic Revolutionary Guards, along with Iran’s proxy, Hezbollah in Syria, has secured Syrian president Bashar al-Assad’s power in that country for the foreseeable future. Assad’s victory in Syria is also a victory for Iranian hardliners, likely tilting the balance of power in Tehran in favor of military expansionism. Even if the more moderate President Rouhani held different views—and this is unknown—he would not have the political capital to voice them openly in contradiction to the hardliners position. Rouhani said during a nationally televised speech on December 5: “The dedicated people of Yemen will make aggressors regret their actions.”

Second, Iran perceives itself as winning in the geopolitical conflict with its rival Saudi Arabia in four Arab countries: Lebanon, Yemen, Syria and Iraq. In responding to Saleh’s death, Jafari also said that the assassination “foiled a plot against the Houthis,” a reference to Saleh’s December 2 decision to shift his allegiances from support for the Houthis, and effectively Iran, to backing Saudi Arabia. Analysts in the Middle East and in the West believe this shift prompted his assassination.

In Lebanon, the recent crisis over Prime Minister Saad Hariri, who resigned briefly under pressure from Saudi Arabia, shows that Hariri’s coalition is fracturing in the face of a relatively united Shia front led by Hezbollah, which holds vast political power inside the government. In lockstep with Iran’s position on the Saleh assassination, Hezbollah’s satellite station, Al Manar, commented December 5: “The killing of Ali Saleh (who was a knife into the people) will bring calm to the Yemeni fight.”

And in Iraq, parts of the state and clerical establishment have tried to make independent decisions, despite Tehran’s dominance of Baghdad.

Iran’s role and aims in the Middle East—often described as expansionist—are more complicated than what typically appears on the surface. In some countries, such as Lebanon and Syria, Tehran’s military intervention is proactive. But in a country like Yemen, Iran’s involvement was probably opportunistic.

Ryan Crocker, a seasoned diplomat who has negotiated directly with Iranian officials over issues such as Iran’s involvement with Al Qaeda operatives and was a chief architect of U.S. policy in Iraq and Afghanistan, certainly believes this is the case. “Yemen and the Houthis were a gift that fell into the lap of the Iranians,” Crocker said in an interview December 4. “Iran always keeps all options open. Everyone is welcome,” he said, referring to Iran’s historic cooperation with Sunni groups in the Middle East.

Although Iran’s involvement in the Arab world can be viewed from a Shia-Sunni fault line, Iran is known to support Sunni groups if there is a strategic advantage to doing so.

It is far too early to know if Iran’s satisfaction with Saleh’s assassination in the long term will serve its interests in the Middle East. But clearly the Islamic Republic has changed its public posture. Apparently, the fragmentation in the region that has worked to Tehran’s advantage has emboldened the regime. Now, the pretense has been lifted.

Geneive Abdo is a resident scholar at the Arabia Foundation, a veteran expert on contemporary Iran and the author of The New Sectarianism: The Arab Uprisings and the Rebirth of the Shi’a—Sunni Divide.