Is Emmanuel Macron Right about Africa? 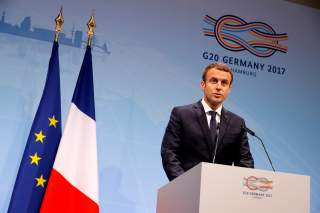 Emmanuel Macron, the new leader of France, is experiencing his first major controversy since becoming president in May. At a G-20 press conference, he characterized Africa’s problems as “civilizational” and lamented that women in many countries there are having “7 or 8 children.” Critics quickly cried racism, finding the president’s comments evocative of France’s fraught colonial past. But it’s a bum rap. Like with many of his remarks, Macron is stating an obvious, uncomfortable truth.

Since upending the French political system by winning an independent-party bid for the Élysée Palace in April, Macron has emerged, especially in the Trump era, as a major force—and a darling of liberals, though not the hard Left. Attractive, remarkably young for a leader of a major country (thirty-nine) and extremely ambitious, he has been described as the great new defender of democracy and the globalized economy, and also, an heir to Napoleon and Louis XIV.

Macron’s Jupiterian vision very much extends to the international scene. This coming Friday, he’s hosting Trump in France for Bastille Day. On Tuesday, he arrived in Switzerland, trying to outflank the U.S. president and win the 2024 Olympic Games (a senior U.S. administration official assured reporters Tuesday that the two have a great relationship, albeit with some disagreements). Macron’s streak of unfettered success has seemingly reached a pause, however, after being asked by a reporter in Hamburg on Saturday why there was no Marshall Plan for Africa, referring to the U.S.-led program that once rebuilt Europe.

“Such a Marshall Plan as you desire is also a plan that will be administered by African governments and regional blocs,” Macron told a reporter from Cote D’Ivoire. “It’s by a more rigorous governance, a fight against corruption, a fight for good governance, a successful demographic transition when countries today have 7 or 8 children per woman.” The part about birth rates is what has drawn the most attention.

“Good God,” reacted MSNBC host Chris Hayes on Twitter. “The hero of European centrism, everybody,” tweeted popular U.K. socialist commentator Owen Jones. “Nice,” Elizabeth Bruenig of the Washington Post remarked sarcastically. “Are we finally realising that Macron isn’t that liberal after all?” reads a headline Tuesday in the Independent. He has been similarly flayed in Vox and Quartz, with the latter declaring “of course what Emmanuel Macron said was racist.”

The brewing firestorm comes on the heels of a less publicized hot-mic joke Macron made in June about migrants.

“When Macron was elected, commentators and observers celebrated that French liberalism still lived. What many fail to realize was that French liberalism—like liberalisms across the West—has always been marked by condescension, paternalism, and racism towards the non-white peoples of the world,” Daniel Magaziner, a historian of twentieth-century Africa at Yale, tells the National Interest. “Emmanuel Macron is apparently keeping that French liberal tradition alive as well.”

But Politico Europe argued that some of Macron’s remarks have been taken out of full context by many publications and users on social media. Macron noted that something “more sophisticated” than the Marshall Plan would be required to really help the continent, which is slated to experience explosive population growth this century. “The Marshall Plan was . . . a material plan in a region that already had its equilibriums, its borders and its stability. The problems Africa faces are completely different and are much different and are civilizational,” Macron said.

And others are asking: was what Macron said actually fair and warranted?

Responding to MSNBC’s Hayes, Scott McConnell, the founding editor of the American Conservative, tweeted, “Chris is really triggered by Macron saying out loud what everyone says and knows in private, including Chris.” In comments to the National Interest, McConnell nodded to the fact that Macron had probably been widely taken out of context, but he also defended the whole of the French president’s remarks. “I thought his overall comment was sophisticated, but the part that gained all the negative attention—the birth rates—is part of the subject too, and I think Macron did well to mention it,” McConnell says.

Indeed, in economics and other social sciences, so-called neo-Malthusians reigned. “If the world’s population had the productivity of the Swiss, the consumption habits of the Chinese, the egalitarian instincts of the Swedes and the social discipline of the Japanese, then the planet could support many times its current population without privation for anyone,” wrote the MIT political economist Lester Thurow in 1986, in what the Guardian noted was a “very different world.” But others have said that the global struggles of recent years signal a comeback for the controversial nineteenth-century thinker, who warned about population growth. “As the world approaches a new era of dearth, misery and its old companion, vice, are set to make a mighty Malthusian comeback,” the financial historian and prominent commentator Niall Ferguson wrote in the Los Angeles Times in 2007, just as the global economy began collapsing.

Whether Macron subscribes to such sentiments is unclear. Clearer is that maybe the critics are right: he’s not much of a liberal. Macron, who just announced that he wants to pass tax cuts for the wealthy and press a pro-business agenda, seems to follow Anglo-Saxon economics more than he does French dirigisme. Maybe he really is a French revolutionary.