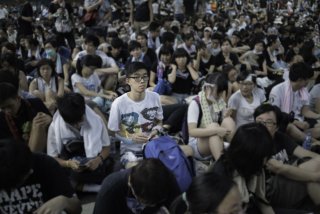 Last year was anything but quiet in Hong Kong. Angered by Beijing’s refusal to let local politics take a more democratic turn, huge crowds—especially of students—clogged main streets and shut down the central business district for ten weeks. Assorted scuffles and police tear gas gave protests an occasional touch of violence though they ended peacefully, if inconclusively. The long-term economic damage was minimal. Yet an atmosphere of distrust and disillusion remains.

So when the government’s Chief Executive, Leung Chun-ying (CY Leung), issued his annual Lunar New Year statement not long ago, he turned to the Chinese zodiac in search of guidance for his discontented public. This is, according to the translation dominant in Hong Kong, the Year of the Sheep (though others say the relevant if ambiguous Chinese character yang (羊) really stands for a goat or ram).

“Sheep are widely seen to be mild and gentle animals living peacefully in groups,” he advised. “In the coming year, I hope that all people in Hong Kong will take inspiration from the sheep’s character and pull together in an accommodating manner to work for Hong Kong’s future.”

But the image of “Good Shepherd Leung” leading his flock to the political equivalent of ever greener pastures did not immediately spring to mind.

Some Hong Kong residents instead interpreted the analogy as one in which lambs go to slaughter, so they dismissed Leung’s words as yet another political blunder by an unpopular leader seen as acting more dutifully toward Communist leaders in Beijing than toward individuals he nominally represents. It was a reminder that Hong Kong has deep divisions and is certain to face future unrest as Beijing inexorably moves to restrict some—though not all—of the civic freedoms that set it apart from the rest of China. This guarantees that the coming months will not be a time for placid sheep.

Several divisive issues are at work but the most obvious one concerns the political future. Though Hong Kong came under Chinese sovereignty in 1997, it has been governed ever since by a special arrangement called “one country, two systems.” This gives Beijing authority over diplomatic and military matters but is supposed to allow—as the applicable law states—“Hong Kong people ruling Hong Kong” with a “high degree of autonomy.”

This means, among other things, that the territory has been guaranteed, at least until 2047, continued press freedom, the right of assembly, an independent judicial system based on British common law, as well as a free market economy and financial standards. In addition, the political system inherited from the British is supposed to evolve gradually into a fully democratic one with local elections. None of this is allowed on the mainland.

At present, the Chief Executive is chosen every five years by an election committee of twelve hundred people selected, for the most part, from interest groups aligned to Beijing; this method has produced three successive leaders with neither a public mandate nor much popular support. Because the top administrator cannot, by current law, represent any political party, there is an strange disconnect between the executive and legislative branches, giving Hong Kong a government that too often seems dysfunctional. Introducing elections by universal suffrage for major posts is supposed to help correct this.

Hong Kong’s vocal pro-democracy politicians had expected popular voting for the top job to be allowed in 2007, but Beijing reneged on an implied promise. Last year, on August 31, however, Chinese leaders said it could be introduced for the next Chief Executive election in 2017—but with a catch. Only “two or three” candidates approved by a special committee under mainland influence can stand for the top office; this meant that pro-democracy candidates perceived by Beijing as unreliable supporters of Chinese Communist Party policies could not win a place on the ballot.

Angry politicians called this a fake democracy that violated the terms of the “one country, two systems” arrangement, and in late September launched a public demonstration called “Occupy Central with Love and Peace.” It was meant to take over the central business district as a peaceful protest against Beijing’s decree and force political concessions. But things soon got out of hand. Unexpected crowds of students, motivated by their own social and economic grievances, overwhelmed the middle-class professionals who run Hong Kong’s small pro-democracy political parties and took control of the streets. Soon the movement had no clear leadership nor agreed set of demands. With Beijing’s strong support, the Hong Kong government simply out-waited the students and by the end of the year, the protest was over.

But not forgotten. Those opposed to Beijing’s decision have promised new demonstrations unless election rules are amended to open up the process of selecting candidates. Or else, the protestors will reject the new plan. Just what they will do and when, or how disruptive new demonstrations may be, remains unknown. However, China—echoed by a supine Hong Kong government—insists no serious concessions will be forthcoming and a completely open nominating process is not possible anytime soon, if ever.

Chief Executive Leung has warned that the city might descend into “anarchy” if more public protests ensue and promises to uphold his version of law and order firmly (his government is buying its first three water cannons for that purpose). Beijing voices are shriller. Some officials have denounced the demonstrations as an attempt to seek outright independence, which it is not, or claim the protests had an even more sinister purpose.

Occupy Central—symbolized by yellow umbrellas—was “an orchestrated Hong Kong version of a color revolution,” according to General Sun Jianguo, Deputy Chief of Staff of the Chinese People’s Liberation Army, implying a relation to the  “Orange” and “Rose,” protests elsewhere. “Hostile forces have always attempted to make Hong Kong the bridgehead for subverting and infiltrating mainland China….under the instigation and support of external forces.” Others, including Leung, have echoed this claim but so far have refused to offer supporting evidence.

A former U.S. government specialist in Asian policy dismisses this claim as “delusional” and notes that it is not certain that Beijing officials really believe what they say. But American officials agree that fear of political contagion is the main reason why Chinese rulers, who can detect conspiracies with a near paranoid consistency, are increasingly intolerant toward Hong Kong politicians. The territory’s relatively free society has long influenced attitudes in the heavily populated, neighboring Guangzhou Province, a leading Chinese export base where people have strong family ties to Hong Kong citizens. Allowing the territory to choose its own leaders strikes the mainland’s Communist Party as an extremely dangerous precedent for the rest of the nation, especially now that President Xi Jinping is cracking down on dissent with a fervor not seen since twenty years. In Xi’s oft-stated view, any opposition to Communist rule is treasonous.

The next move is up to the Hong Kong government. It has just completed its second so-called “public consultation” about Hong Kong’s political future, wherein it goes through the motions of testing public opinion. By the end of April, it will forward final election-rule recommendations for Beijing’s approval. These will not differ much from those decreed by Beijing last August, but could include minor amendments. If results of the first consultation are a guide, the government report will tell Beijing what it wants to hear rather than honestly explain what many in Hong Kong would prefer. Once Chinese leaders accept the report, then Hong Kong’s Legislative Council (LegCo) must approve it by a two-thirds majority before the territory can, in 2017, hold its first-ever popular election for its leader—under terms that omit candidates who lack the center’s prior approval.

LegCo action remains uncertain. Pro-democracy figures have about a third of the total seats, enough to block action and scupper the Beijing plan. But that would keep the existing system in place indefinitely, with the next Chief Executive chosen by the same twelve hundred-person committee that picked the unpopular Leung. With no fallback plan available, the pro-democrats would have to decide between flawed electoral reform or none at all, with no prospect for serious change in sight. The Hong Kong government is trying to convince a few opposition members that something is better than nothing, and herd its plan safely through LegCo by this summer. So far, however, the pro-democrats claim they remain united against the Beijing plan, especially as modest proposals that could make it more acceptable have been rejected.

The Occupy Central movement radicalized some in the pro-democracy camp, and energized student groups to an unprecedented degree. If the final law does not make the voting plan more palatable, new demonstrations seem inevitable, though they may not match the initial protests in magnitude. Other grievances could intensity protests. Many young people believe the Hong Kong business establishment has cast its lot with Beijing, with capitalists and Communists colluding to prevent local democracy.

They are not incorrect. Local tycoons fear that a freely elected government might introduce populist welfare programs and raise taxes; they also believe they can protect their extensive commercial interests in China by backing the ruling party. President Xi, in fact, has met conspicuously with Hong Kong business leaders, saying that maintaining their prosperity is a key Communist Party policy.