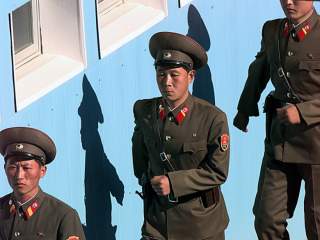 Despite its isolation, despite its poverty, despite breathless international condemnations, North Korea marches ever closer to fielding a functioning intercontinental ballistic missile. More troubling, Pyongyang is also making progress in miniaturizing a nuclear weapon to put atop such an ICBM, even as its collection of bombs grows.

And so Kim Jong-un, a thirty-something enigma with less than a decade of leadership experience of any kind, may soon control a small nuclear arsenal with which he can target the United States. Already last April, Adm. William Gortney, head of both Northern Command and NORAD, was warning that North Korea had “the ability to put a nuclear weapon on a KN-08 [road-mobile missile] and shoot it at the homeland. We assess that it’s operational today.”

The Obama administration has exercised a policy of “strategic patience” vis-à-vis the North over the past seven years. Then-Secretary of Defense Robert Gates, insisting he was “tired of buying the same horse twice,” was right to approach renewed negotiations with North Korea with wariness. But strategic patience has amounted to strategic folly. Patience was always an odd approach to take with a regime responsible for the deaths of hundreds of thousands of its own people, prone to violent outbursts and intent on developing the means to drop a nuke on Los Angeles.

The administration, moreover, has all but admitted to outsourcing its North Korea policy to China. After the January 6 nuclear test, Secretary of State John Kerry told reporters, “China had a particular approach that it wanted to make, that we agreed and respect to give them space to implement it.” Three weeks later, while in Beijing, Kerry called on China to use its “special role and its connections to North Korea” to resolve the problem.

In short, whether the Chinese do it their way or the American way, they have to do the heavy lifting. That Beijing has no interest in doing so is plain to see, and has been for years.

If the United States wants to denuclearize the Korean peninsula, it will have to lead from the front. And to change North Korea’s calculus, Washington will have to adopt a far more impatient approach to Pyongyang.

First, the United States must begin investing in a robust missile defense capability—one that can reliably intercept missiles during all phases of flight. North Korea must know that it cannot decouple South Korea from the U.S. nuclear umbrella and that nuclear blackmail is not a tool at its disposal. The United States must turn North Korean nukes into wasting assets, useless to Kim’s efforts to intimidate or coerce foreign adversaries. Going forward, once it is confident in its defenses against North Korean missiles, Washington should also consider issuing a declaratory policy: it will shoot down all future long-range missile tests—period.

Of course, North Korea’s nuclear and missile programs are not only about the regime’s external security perceptions. They are also used to shore up support for Kim Jong-un, both within the regime and amongst the broader population. To counter those benefits, the United States should seek to undermine Kim’s image as a competent and powerful leader.

It could start by sponsoring a vote at the UN Security Council to refer him to the International Criminal Court for what the UN High Commissioner for Human Rights has called “gross human rights violations.” China and Russia will exercise their vetoes, but news of the vote, which will make its way into the North, will be damaging. Ideally, the United States would bring the referral to a vote every time the Security Council meets, forcing China and Russia to repeatedly and publicly align themselves with the world’s worst human rights violator and repeatedly embarrassing Kim Jong-un at the world’s premier multilateral organization. Kim’s cronies should know that his nukes have bought him no respect abroad.

Finally, the U.S. Senate should move swiftly to approve the North Korea Sanctions and Policy Enhancement Act of 2016, and the president should sign the bill as soon as it hits his desk. The bill would significantly tighten sanctions on the regime, depriving it of the ability to raise hard cash. When economic statecraft is done right—as it was in 2005, when the United States effectively cut North Korea off from the international financial system—it can so undermine regime cohesion that the leadership is forced to deal.

North Korea has been referred to as “the land of lousy options.” But there are, indeed, options for tackling the North Korean threat. None are without risk. But the bigger risks lay in staying the course. With nuclear-tipped missiles, Kim Jong-un could upend the security order in Asia, which has kept the peace for decades, and directly threaten the U.S. homeland. That’s not a future worth patiently waiting for.