Is This the End of the Liberal World Order? 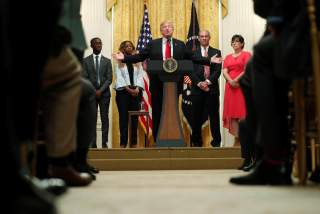 Over the last several weeks, beginning with the NATO summit in Brussels, quickly followed by the meeting in Helsinki between President Donald Trump and Russian president Vladimir Putin, reporters and pundits have been mourning the demise of long-standing U.S. foreign-policy nostrums, and lamenting the emergence of a dark and dangerous new world order.

Writing in the Washington Post after the Brussels summit, the Brookings Institution’s Robert Kagan concluded, simply, “things will not be okay. The world crisis is upon us.”

The liberal order, he writes at Foreign Policy, cannot “simply be destroyed by the whims of a single individual, even the president of the United States.”

The liberal world order is “sticky” in that it contains fundamental elements . . . which outlast any one president’s time in office. While it’s certainly possible that Trump could seriously—or even permanently—wreck these elements, it is too early at this point to state definitively that he has.

These two individuals share a common belief in the value of the liberal international order (LIO), even if they disagree on its relative durability.

But we should question both propositions. The world order under American leadership always had its share of struggles. As Paul Staniland notes at Lawfare, “Proponents of the order . . . often present a narrow and highly selective reading of history” in which “problematic outcomes are treated as either aberrant exceptions or as not truly characterizing the order.”

In short, we have reached this latest crisis in a crisis-filled Trump presidency mostly because the foreign-policy establishment has relied on nostalgia and myth to avoid reckoning with that order’s shortcomings. Kagan and Kirchick’s commentaries are a near perfect reflection of that mindset.

Such nostalgia “impedes Washington from undertaking a needed reassessment of its grand strategy,” explains Patrick Porter in a recent paper for the Cato Institute. “Endless recall of the ‘liberal order’ . . . damages the intellectual capacity to diagnose the failures of the recent past” and “harms the effort to construct a workable design for the future.”

Constructing this “workable design” begins with an accurate assessment of what the old order delivered, and failed to deliver, during its heyday. It also includes an honest accounting of what risks and burdens the American people will tolerate under a future order that is less dependent upon American power, and less deferential to the preferences of Americans.

“Citizens seeking a better foreign policy ought to be engaged, not ignored,” Thomas Meaney and Stephen Wertheim write, but foreign-policy elites “rallying behind the lowest common denominator of ‘anything but Trump,’ . . . are disengaging the public’s discontent, [and] pulling up the drawbridge until the next election.”

Thankfully, serious foreign-policy observers—including Bruce Jentleson, Graham Allison, Heather Hurlburt, Rebecca Friedman Lissner and Mira Rapp-Hooper, and Nick Danforth—are admitting that we can’t go back to the old ways, even if we wanted to.

Kirchick suggests that Trumpism is a passing phenomenon, but he and other nostalgists ignore the dramatic geopolitical changes that have occurred since the order was first established. “In the LIO’s inception and for many decades,” Jentleson explains, “the United States had the power and wealth to sponsor and buttress the system. What it gave the world…and what it took…were generally seen as in balance. To the extent they weren’t, . . . others had limited power to do much about it.” But today “no one country has sufficient dominance to set the rules largely on its own and in its own image . . . More countries are actors, rather than acted upon.” For this and other reasons, “There is no going back to the role and system we reveled in before.”

Lissner and Rapp-Hooper agree. “The erosion of American military, economic, and political power,” they write in a recent issue of The Washington Quarterly, undermines the order at its very foundation and, critically, “will not evaporate with Trump’s departure from the Oval Office.”

One wouldn’t exactly characterize these musings as optimistic, but these authors admit to the need for solving a problem, as opposed to simply bemoaning our fate—or blithely assuming that all is well. Our focus should be on developing credible alternatives to the world order that served a good part of the planet reasonably well for most of the last seventy years. After all, even skeptics of that order concede that, as world orders go, it had a pretty good run.

“At issue here is neither the legitimacy of American power in the world nor many of its benefits,” Porter admits. “If there was to be a superpower emerging from the rubble of world war in midcentury, we should be grateful it was the United States, given the totalitarian alternatives on offer.”

But past performance is no guarantee of future results. Nostalgia for the old U.S.-dominated order based on a selective reading of history, and a willful ignorance of the present balance of political and economic power, cannot deal squarely with the order’s limitations and shortcomings. It makes it nearly impossible for us to construct a reasonable alternative for the future.

Whereas Kagan and Kirchick despair that any such alternative exists, or is even needed, the wealth of informed commentary cited here gives one hope that the broader foreign-policy community is more willing than they to scrutinize the comfortable nostrums that have sustained American foreign policy for decades.