An End to the War in Afghanistan 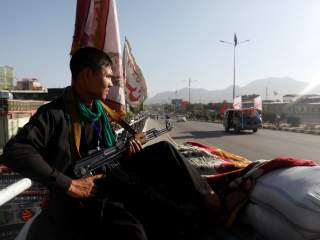 As violence from Taliban attacks in Afghanistan remains unabated, and the hoped for ceasefire during Eid al-Adha did not materialize, it is worth reflecting on how ripe the conditions are for peace are in Afghanistan and how a rare geopolitical window of opportunity has opened up for the more powerful countries that regularly intervene in Afghanistan.

The Taliban came close to agreeing to another ceasefire, deciding against doing so only to attempt to demonstrate that the stepped-up bombing campaign of the United States and its NATO allies was not forcing the terrorist group to the negotiating table. There had been ample expectation on both sides that they could agree upon a brief truce that offered the prospect of prisoner releases and possibly more.

After all, an unprecedented breakthrough ceasefire occurred as recently as the end of Ramadan in June. In a series of dramatic moves and scenes, rank and file Taliban fighters across the country entered Afghan cities and appeared to engage in spontaneous gestures of peace and national camaraderie. Taliban fighters were filmed kibitzing with Afghan soldiers, eating candy and ice cream in public squares, and even taking selfies with those they had previously tormented, including women—not only in Kabul, but up and down the country.

These scenes took nearly everyone by surprise. They helped to create a fresh understanding that after nearly two decades of a civil war/insurgency the Taliban, the government, and the Afghan people are apparently poised to adopt some form of peace—if to varying degrees. Skeptics remain, however, for this year also happens to constitute the bloodiest year since the 2001 initiation of the conflict when measured in terms of civilian deaths.

Moreover, earlier this month the Taliban staged a rather brazen attack on the city of Ghazni, only ninety miles from Kabul and home to a quarter of a million residents. The Taliban took the city with relative ease, and briefly held it until 200 to 250 civilians were killed amid the fighting. By that time government troops retook the city with support of U.S. airstrikes. The Taliban have long controlled the countryside around Ghazni—and in 45 percent of the rest of Afghanistan—and had even collected taxes in part of the city.

Despite the hundreds of billions of dollars of aid money given by the U.S. and western allies over the course of the past seventeen years, low troop morale, widespread corruption among commanders and officials (some leading to aid money falling into insurgent hands), and nefarious intervention by multiple external countries has kept large swathes of Afghanistan unstable.

Yet several key factors appear to be making some form of ceasefire and/or peace possible, if not necessarily fully probable. First, the Afghan special forces are actually fairly effective. While they do not constitute a large percentage of Afghan forces, they are well trained and well commanded (evidence supplied by the fact that the Taliban never hold large towns or cities for long). Second, most of the country’s thirty-five million people are not just tired of war, but they are expressing their discontent in novel ways. For example, the breakthrough ceasefire in June also coincided with a young-person-led “Peace Caravan” that traveled from Helmand province on foot to Kabul to demand a cessation to the conflict, laying blame for the long war’s continuance directly at the feet of Pakistan, Iran and Russia—the three major funders of the Taliban.

Third, there is fresh evidence that a significant percentage of Taliban commanders and fighters have also grown weary of the carnage (and to a degree disloyal to their feckless and resented leader). Strategy shifts in the Taliban ranks have been the most surprising variable. Not only fighters, but even a modicum of the Taliban’s operational commanders have evinced a newfound propensity toward peace. Some of them have even talked openly of allowing the present configuration of Afghan national institutions to remain largely in place, subject only to their integration into the Afghan military and police forces.

Fourth, the United States and its allies have not only increased their attacks on the Taliban as of late, but it has for the first time in the conflict engaged the Taliban directly at the negotiating table—with Washington also naming a new special envoy for the conflict in the seasoned diplomat Zalmay Khalilzad. The United States had long maintained that it was proper for the Taliban to deal diplomatically only with the Afghan government.

Finally, and perhaps ultimately what may prove most decisive of these factors, the notorious Great Game—in which outside powers have intervened in and jousted over Afghanistan for a century and a half—is proving surprisingly propitious in terms of a rare coinciding of the interests of these countries. Specifically, it appears that the stability of Afghanistan is now squarely in the interests of all of them, including the United States, Europe, Turkey, China, India, Russia, Iran, Pakistan and the Gulf countries.

Afghan stability is obviously a stated goal and consistent pursuit of the Americans and Europeans, as well as the Turks and the Indians—and for the most part Saudi Arabia and its fellow Gulf countries, who have a shared interest in keeping insurgents at bay. Iran only recently began funding the Taliban, but this appears mostly in response to the animus from the post–election Trump campaign and presidency. Iran’s interests lie in trading as much as possible with all of its neighbors, coming out of sanctions and more recently being subject to them again. For example, it is working with both India and Afghanistan to build up its Chabahar Port, which is to connect to the latter by rail. In addition, eastern Iran is particularly prone to drought, and the rivers it shares with Afghanistan flow downhill from the Afghan side of the border.

Russia is also wary of insurgencies, and feeding the insurgency in Afghanistan has led to part of it to spread to within what it defines as its sphere of influence in Central Asia. Russia’s intervention in Syria occurred partly due to its desire to keep insurgent-based instability confined to this geographic area. Yet Russia wishes to thwart Western and American interests wherever it can, with Afghanistan being a choice location for doing so. But Russia, having long suffered from Islamic extremism within the old borders of the Soviet Union, remains opposed to the spread of extremist violence from the Middle East as well as Central and South Asia, whether it is the Islamic State or the Taliban. In fact, Russia, Iran, China and Pakistan all encouraged the Taliban to commit to the June ceasefire.

China is rapidly building its Belt and Road Initiative across the region, thought it did make a highly impactful decision to cut Afghanistan out of its immediate plans by choosing Pakistan to be the recipient of a massive road/rail/port network that has come to be called the Chinese Pakistan Economic Corridor (one of Afghan President Ashraf Ghani’s greatest failures was failing to persuade China to include Afghanistan). Yet the Chinese have recently come to realize that it is in their interest to build spurs off of CPEC into Afghanistan, so as to connect with the Central Asian states. In addition, China may slowly be coming to realize that it is capable of accomplishing something than even the United States cannot, viz. pressuring Pakistan to end its support of the Haqqani network, one of the most fearsome elements of the Taliban network (due to CPEC it has enormous leverage over the Pakistanis).

Finally, Pakistan has long kept what it calls “a buffer zone” in place in Afghanistan by hosting and funding the Haqqanis and other Taliban leaders/forces. It has done this partially to achieve “strategic heft” against India, but primarily because it has not wanted Afghanistan to become stable and develop ahead of it. In light of Afghanistan’s sizable deposits of oil and gas and rare earth minerals, Pakistani leaders primarily in its security forces have aimed to keep Afghanistan unstable. But now that Pakistan will almost certainly develop sooner than its northern neighbor due precisely to CPEC, it stands to benefit from a stable Afghanistan—not only from the diplomatic kudos it will receive for ending its Taliban support, but being energy-poor it needs oil and electricity from energy-rich Central Asia to transit in grid and pipeline networks across Afghanistan. The Afghans are particularly savvy at promoting energy and transport infrastructure projects with the Central Asians, which bodes well for Pakistan.

For good or for ill, a host of external nation states believe they have their own national-security interests at stake in Afghanistan, and intervene there regularly whether invited or uninvited. But each of them now share, for the first time in history, joint interests in a stable Afghanistan. Unfortunately, this deep strategic interest is often overridden by what the international community perceives as the short-term interests of Russia and Iran. Their presence antagonizes the United States and vice-versa, as does Pakistan and India circumventing one another. But with some creative diplomacy a considerable amount can be achieved, as cooperating to engender the stabilization of Afghanistan will serve all of their deeper strategic interests—not to mention the interests of the Afghan people.