The End of the Wilsonian Century? 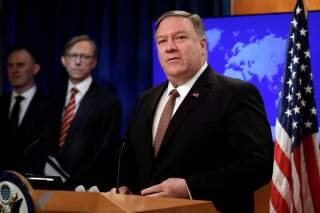 One hundred years ago this fall, the U.S. Senate debated whether to enter into a new League of Nations championed by then-president Woodrow Wilson. In Wilson’s mind, the League was meant to be the capstone for American leadership of a liberal world order.

Today, the Trump administration’s critics worry that the United States has become the leading opponent of that same liberal world order. But the administration’s most fervent critics misunderstand its foreign-policy approach, along with multiple U.S. diplomatic traditions.

Fundamentally, a close attention to U.S. freedom of action and material American interests is no scandal. The true starting point of U.S. foreign policy is not to promote rules-based liberal world order through multilateral institutions, as such. Rather, the true starting point for US foreign policy is to promote the interests, security, prosperity, principles, and self-government of U.S. citizens. Other worthwhile American commitments—including those in favor of pluralistic regional systems abroad, along with specific U.S. alliances—follow from that starting point.

Liberal internationalists insist that American engagement abroad be on liberal or Wilsonian terms. But the Wilsonian internationalist vision, especially in its post–Cold War iteration, contains some very serious flaws that helped lead to Donald Trump’s election in the first place.

Unless and until today’s Wilsonians grapple with these realities convincingly, there is no sign that Trump’s appeal for a great many U.S. citizens will dissipate.

Within the United States, the liberal internationalist or Wilsonian vision developed in three great waves.

The first U.S. liberal internationalist wave developed during and immediately after World War !. Woodrow Wilson’s vision was that U.S. entry into war against the Kaiser’s Germany would usher in a new world order characterized by global democratic government, economic interdependence, mutual disarmament, and collective security. This last feature, in particular, was to be secured through a new League of Nations, in which every member state would promise to protect the independence of every other state by force if necessary.

American hopes for the spread of popular self-government overseas were of course nothing new. The nation’s founders had spoken of this often. But the founding generation of the United States, along with several generations after, also took it for granted that American national sovereignty was to be cherished and preserved. They saw no contradiction between that determination, and hoping for the spread of republican forms of government internationally.

Wilson’s great innovation, therefore, was not to aim for the spread of democracy. Rather, his great innovation was to insist that only through global, binding, multilateral commitments could American democratic values be safely promoted abroad.

Most Republican U.S. senators at the time, led by Henry Cabot Lodge Sr. (R-MA), did not disagree with postwar U.S. security commitments toward key European allies such as France and Great Britain. In fact, to a greater extent than Wilson, they favored such commitments. However they refused to believe that the United States had an equally vital interest in the material defense of every single nation on earth, and for this reason they opposed Wilson’s League in the absence of significant revisions. Refusing to compromise on this point, Wilson lost his vote in the Senate, along with U.S. membership in the League. Wilson failed in the short term. But in the long haul, he laid down ideological markers that would prove to be exceptionally powerful.

The second Wilsonian wave developed during and after World War II. Under presidents Franklin Roosevelt and Harry Truman, the liberal internationalist vision was resuscitated and put forward in new form. Both of these Democratic presidents framed their foreign policies in part as attempts to vindicate hopes for a more open and humane world order, and there is every sign that they meant it. But their 1940s version differed from Wilson’s in several significant ways. Both FDR and Truman were more politically adroit than Wilson in recognizing and responding to domestic political critics. Valid Republican concerns were often factored into presidential foreign-policy proposals, rather than rejected out of hand. The political mood within the United States had changed to the extent that more Americans were willing to consider truly dramatic departures in U.S. foreign policy. The terrifying spectacle of fascist aggression followed by Soviet Communist expansion constituted a powerful real-world argument on behalf of greater U.S. engagement overseas. This was no abstract case for global governance. Rather, it rested on the concrete existence of totalitarian and genuinely threatening great-power adversaries bent on competition. And the United States of the 1940s possessed unprecedented material capabilities to act on the above concerns.

Together, FDR and Truman launched a major shift in U.S. foreign policy. Yet in reality, neither of them entirely rejected traditions of American nationalism. In some ways they built upon those traditions. In their plans, the United States retained considerable leeway for freedom of action, whether unilateral or bilateral, diplomatic, military or economic. And unlike Wilson, both FDR and Truman grasped the central geopolitical challenges of their presidencies instinctively. In this practical manner, as opposed to dogmatically, they addressed the particular challenges of their day.

The third Wilsonian wave developed after the end of the Cold War. Confident that history itself might have ended, liberal internationalists now argued that a combination of multilateral institutions, conflict resolution mechanisms, humanitarian interventions, worldwide democratization, and global governance projects would render traditional patterns of power politics irrelevant. Post–Cold War Wilsonians on the right—while more realistic about the limits of multilateralism—shared the optimistic emphasis on worldwide democratization. In this sense the trend was bipartisan. The Clinton administration pursued a policy of international engagement and enlargement, hoping to expand the sphere of friendly market democracies at limited cost to the United States. The George W. Bush administration responded to 9/11 by embracing ambitious attempts to democratize the Greater Middle East. And the Obama administration—while dialing back on Bush’s particular emphasis—hoped to encourage greater international coordination around liberal norms through U.S.-led accommodations.

All three of these post–Cold War presidents were sincere in their broad foreign-policy goals, and all three had certain specific successes. Yet history did not end. That is to say, historically normal patterns of interstate rivalry and geopolitical competition—animated by differing ideologies, shifting power dynamics, and competing national interests—did not disappear. Instead, they simply took new forms. In particular, the rise of China; the resurgence of Russia under Vladimir Putin; and the stubborn persistence of numerous authoritarian regimes well beyond those two major powers combined to create disturbing new security challenges for the United States and its traditional allies overseas.

During the 2016 presidential campaign, Donald Trump had unexpected success campaigning against the Wilsonian tradition in its entirety. He argued the United States had borne disproportionate costs for its expansive world role going back many years. He maintained that multilateral free trade agreements had harmed the interest of American workers. He stated that post–Cold War U.S. military interventions had been generally botched. He insisted that America’s allies had not carried their share of the common burden with the United States. And bundling the issue of immigration into these concerns, he proposed a hard line against illegal migrants, drawing a clear line between benefits for U.S. citizens and benefits for those who are not.

Nobody knew exactly what Trump’s foreign policy would look like if put into place. Perhaps he himself did not know. Given his many off-the-cuff statements and unusual persona, there were plenty of reasons for concern.

Now three years later, liberal internationalist critics argue that the foreign-policy record of the Trump administration is one of relentless assault on the rules-based world order. In fact they regularly lump the United States government together with prominent autocracies based in Moscow, Beijing, and elsewhere as part of an overall nationalist authoritarian assault on rules-based liberal order. But setting aside the fact that American nationalism is democratically expressed—in other words, the opposite of authoritarian—there are still some profound problems with this common liberal understanding.

In actual fact, as president Trump has not dismantled either America’s alliance system or its forward presence overseas. To be sure, he has pushed U.S. allies hard on trade as well as on defense spending, and probed the underpinnings of internationalist assumptions. The forty-fifth president is no Wilsonian—far from it. Yet the Trump administration continues to maintain a range of pressure campaigns against U.S. adversaries overseas, and in many cases has escalated these campaigns relative to the Obama era. This is no comprehensive disengagement offshore. Strict non-interventionists within the Republican Party understand that very well, which is precisely why they question those same pressure campaigns. There is no misunderstanding on this point.

Trump moves up and down the escalatory ladder, trying to carve out what he views as relative material gains for the United States. A lot of observers have a hard time turning the volume down. But watching his behavior as president, there is really no more evidence that he is hell-bent on destroying what liberals describe as the “rules-based world order” any more than he is on upholding it. The concept is obviously not his primary reference point one way or the other. Rather, he is undertaking a kind of portfolio reassessment of America’s international commitments, and its outcome is not predetermined.