Endgame in the Iran Negotiations: The Choice Is Tehran's 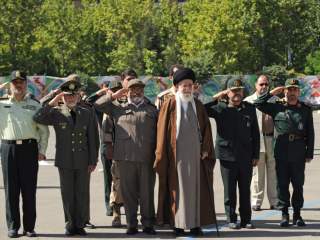 Now that the Corker-Cardin legislation has been adopted without poison pills attached, it is virtually certain that Congress will be unable to block President Obama’s ability to conclude and begin implementing a nuclear agreement with Iran that he believes meets U.S. requirements. The main domestic impediment to a deal lies in Iran. If negotiations are to be brought to a successful conclusion, Supreme Leader Khamenei must decide that he wants an agreement, that he is willing to make the hard choices necessary to achieve one, and that he is prepared to use his authority to bring Iranian critics on board.

The Corker-Cardin bill, which was eventually embraced and signed into law by the President, establishes a process for Congress to review, vote on, and potentially reject an Iran nuclear agreement. A joint resolution of disapproval would prevent the Obama Administration from suspending statutory U.S. sanctions and therefore from implementing the agreement. However, many members of Congress regarded the bill not as a referendum on the emerging nuclear deal but as a vehicle for giving them a say on a highly consequential American international undertaking. If and when an agreement is sent to Congress, a sizable number are likely to support it as the most promising means of resolving the Iran nuclear issue peacefully.

Moreover, a joint resolution of disapproval can be vetoed by the President. Consequently, to scuttle the deal, opponents would need a two-thirds majority in both houses of Congress to override a presidential veto. With the May 7 letter to the President from 151 House Democrats supporting the Iran nuclear negotiations, it appears Obama will have the one-third in the House needed to sustain his veto. If the final agreement preserves and successfully builds on the political framework reached by the P5+1 countries and Iran in Lausanne on April 2, the administration should also be able to garner the support of at least the 34 Members required to prevent a veto override in the Senate.

Senator Ted Cruz, a strong opponent of the emerging nuclear deal, conceded as much. Referring to the Corker bill, he said “it is a virtual certainty that, no matter how terrible this deal is, it will go into effect and this legislation is unlikely to stop it.”

The Lausanne Framework: A Promising Foundation

Actually, the emerging nuclear deal is not terrible at all. The Lausanne framework indicates that the Obama administration is well on its way to achieving its main negotiating objectives:

·      A combination of constraints—including reductions from more than 9,000 to just over 5,000 centrifuges enriching uranium, from over 19,000 to around 6,000 installed centrifuges, and from around 10,000 kilograms to 300 kilograms of enriched uranium—will increase the time it would take Iran to produce enough fissile material for a single nuclear weapon to at least one year for a period of at least ten years.

·      The re-design of the Arak heavy water reactor, the requirement to send its spent fuel out of Iran, and the ban on reprocessing facilities will effectively block the plutonium path to a nuclear weapon.

·      Far-reaching verification arrangements—including adherence to the IAEA Additional Protocol, continuous surveillance of key elements of the uranium and centrifuge supply chain, and a monitored procurement channel—will provide confidence in the ability to deter and detect covert Iranian activities.

What is publicly known about the Lausanne framework comes mainly from a U.S.-issued fact sheet as well as from a European Union-Iranian joint statement that was short on details at Iran’s insistence. Although the Iranians have complained that the U.S. fact sheet is highly selective and one-sided in featuring those elements of the framework most favorable to the United States, the Americans assert that Iran agreed to everything in the fact sheet—and Iranian negotiators do not dispute that claim.

Indeed, as hinted at in the fact sheet, more has been agreed than has been made public.  For example:

·      The fact sheet states that “Iran will engage in limited research and development with its advanced centrifuges, according to a schedule and parameters which have been agreed to by the P5+1.” Such constraints would prevent Iran from gaining full confidence in the performance of advanced centrifuges during the agreement’s initial ten years, requiring Iran to carry out additional research and development after ten years and delaying the operational deployment of the more efficient machines.

·      The fact sheet also states that “beyond ten years, Iran will abide by its enrichment and enrichment research and development plan submitted to the IAEA.” All parties to the Additional Protocol are obliged to submit such a plan. While Tehran’s plan will be based on Iran’s own evolving capabilities and perceived needs and will not be formally agreed with the P5+1, it appears that there may already be a mutual understanding of its key elements that will provide assurance that, when certain restrictions on Iran’s enrichment program expire after ten years, Iran’s enrichment capacity will only grow at a measured and predictable pace.

·      The “disputes resolution process” mentioned in the fact sheet also seems to have been agreed but not yet made public. A workable mechanism—one that could ensure that one or a couple of parties could not, for example, block an inspection—would build confidence that the agreement will be faithfully implemented.

The Lausanne framework left a large number of important issues unresolved. But its publicly and privately agreed elements provided a promising foundation for working out a detailed comprehensive agreement in succeeding months.

The momentum achieved in the final days in Lausanne, however, has not been sustained. Despite frequent meetings at the ministerial, political directors, and experts levels—both between Iran and the United States and Iran and the P5+1—insufficient progress has been made since April 2, and only about three weeks remain before the June 30 target date, when the current interim agreement will expire.

A serious complicating factor—aside from the usual hard bargaining that can be expected in any high-stakes negotiating endgame—has been a series of public statements by Supreme Leader Khamenei and other senior Iranians that have seemed to contradict and backtrack from solutions already worked out in the negotiations.

Within a week of the Lausanne agreement, the Supreme Leader asserted that all sanctions must be removed as soon as a final agreement is reached. But the notion of immediate removal of sanctions is at variance with Iran’s earlier acceptance of the idea, as recorded in the EU-Iran joint statement, that relief from U.S. and EU sanctions would only come “simultaneously with the IAEA-verified implementation by Iran of its key nuclear commitments.” As agreed at Lausanne, what Iran would need to do to trigger sanctions relief would include such significant undertakings as removing excess centrifuges to monitored storage, removing a critical component of the Arak reactor, reducing enriched uranium stocks to 300 kilograms, repurposing the Fordow enrichment facility, and taking agreed steps to address concerns about past Iranian activities believed to be related to nuclear weapons development.

Iranian negotiators are therefore faced with the challenge of reconciling what they have already agreed to with the statements of their Supreme Leader and the expectations those statements have created within Iran for the premature removal of sanctions. One way they have tried to square the circle is to admit that sanctions relief would follow Iranian implementation of key nuclear commitments but contend that those commitments can be implemented in an impossibly short period of time—a matter of weeks rather than the half year or more that would almost surely be required. Continued Iranian insistence on the position that all sanctions must “cease to apply” (their preferred formulation) as soon as the comprehensive agreement is reached or in an unrealistically short period of time thereafter would undoubtedly ensure deadlock.

Khamenei has also been publicly adamant that IAEA inspectors will not be granted access to Iranian military installations. But Iranian negotiators freely acknowledge that the Additional Protocol to which Iran is committed permits IAEA access to any location where questions of compliance have arisen, civilian or military. To square this circle, Iran’s negotiators say that “managed access” procedures—which are provided for in the Additional Protocol to protect parties’ legitimate secrets unrelated to their nuclear nonproliferation obligations—can be used at Iran’s military installations to protect its national security, thereby not crossing the Leader’s redline.

However, the notional managed access procedure described by Deputy Foreign Minister Abbas Araghchi in a May 25 television interview is so excessively constrained as to be comical. In the example provided by Araghchi, an IAEA inspector is blindfolded and taken into an installation where everything is covered up so that nothing can be seen. The blindfold is removed, the inspector is allowed to take an environmental sample with a handkerchief, and the inspector is then blindfolded again and escorted out of the installation. The IAEA would clearly regard such a procedure as woefully inadequate to meet its verification responsibilities.

It is unclear why the Supreme Leader is taking public positions that appear to contradict agreements reached by his negotiators. One explanation is that Iran’s negotiating team has gotten out ahead of the Leader’s instructions. But it is highly unlikely that Iranian negotiators are operating outside his guidance. Especially on issues as politically sensitive as the timing of sanctions relief and access to military installations, the Iranian negotiating team would want to be confident of the Leader’s support before committing to solutions.