Ending the Korean War Is in the National Interest 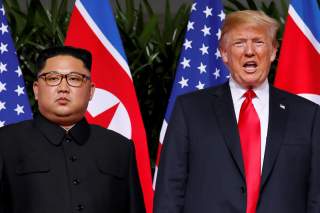 It has been decades since bombs fell and bullets flew on the Korean peninsula. Yet the United States, China, North Korea, and South Korea still technically are at war. The Korean War ended in an armistice, not a peace treaty.

The time is long overdue for the “combatants” to declare a state of peace.

Everything changed this year. Although the Trump-Kim summit was the highlight, there was much more. Kim’s three meetings with China’s Xi Jinping suggest that the Democratic People’s Republic of Korea has moved closer to Beijing’s position, which for years emphasized stability and peace.

Kim met twice with the Republic of Korea’s Moon Jae-in and the second visit was arranged overnight. South Korean diplomats report that the DPRK’s Supreme Leader treated Moon, his elder, with traditional Asian deference. Kim rules with a lethal hand but is deftly playing the game of international statesman.

Indeed, Kim apparently has been invited to Moscow to meet Vladimir Putin, and there is even talk of a summit with Japan's Shinzo Abe. The North Korean leader appeared to enjoy his stroll in Singapore. He appears unlikely to revert to his father's and grandfather's hermit-like behavior.

Equally significant, the North recently ended its anti-American propaganda. Cleaning up Pyongyang, so to speak, will be no easy task. Posters line streets and fill walls. The United States was a frequent target. This change could be a ruse, of course. But likely not. For seventy years Washington and its “puppets” in the ROK were the primary enemies used to rally North Koreans behind the regime. Now Kim Jong-un has implicitly declared that peace reigns on the peninsula.

Recognizing changing reality is a good reason to make peace formally, but there is a better one: encouraging movement toward denuclearization.

Grant that no one has ever gone broke betting against DPRK intransigence. Moreover, America has given Kim much cause to hold on to his nukes. The last international pariah to disarm in return for Western expressions of love and affection, Muammar Gaddafi, probably wondered in his dying moments why he had trusted the Americans.

Nevertheless, Kim appears to be different than his predecessors. He is more committed to economic reform and comfortable with the international spotlight than his father and grandfather. He has established a friendly relationship with several foreign leaders. He has taken the North from the most threatening ever—staging multiple nuclear and missiles tests accompanied by threats against America—to the most pacific ever, eliminating even domestic anti-American propaganda. In a first, he at least wants the DPRK to appear non-threatening. Perhaps he is trying to deceive his enemies. But he might really want to live peacefully with them, whether or not he keeps his nuclear arsenal.

If denuclearization is possible, it still won't be easy. Pyongyang won't give away anything for free, and Kim understandably wants assurances—presumably better than those received by Gaddafi. Before the summit, Kim said nukes wouldn't be necessary if the United States and DPRK had a relationship and lots of contact. Moreover, the short statement agreed to at the summit put denuclearization last, after establishing "new U.S.-DPRK relations" and building "a lasting and stable peace regime." Kim almost certainly expects to proceed in that order.

This will take more than one leader summit or a handful of secretary of state visits. The administration should seek to accelerate the process, first ending the dual travel ban, on Americans going to North Korea and North Koreans coming to America. A greater flow of people would be the sort of contact that Kim presumably desires. Dropping the prohibition also would indicate the end of what the North Koreans routinely term America’s “hostile policy.”

The administration also could send additional visitors. A Treasury Department official could discuss how Washington might roll back sanctions—if Pyongyang proceeds with denuclearization. The U.S. Trade Representative could send someone to chat about commercial possibilities, again, if the DPRK moves forward. The objective would be to demonstrate to Kim that the administration is prepared to establish significant, positive, and ongoing ties.

Washington also could suggest that private figures in the entertainment and sports industries visit Pyongyang. What kind of cultural cooperation would be possible if bilateral ties expand? Again, the goal would be to highlight both the potential benefits of disarmament and the Trump administration’s desire to build a cooperative future. Kim might believe the United States is less likely to bomb a nation that is busy hosting American celebrities.

In addition, the administration should propose the elimination of today’s formal state of war. Pyongyang long pushed to create “a peace regime,” despite the Kim dynasty’s at times brutally confrontational policies. Some Washington policymakers fear that a formal peace treaty would be viewed as a concession, but the United States and South Korea no less than the DPRK have an interest in peace. Even something less formal than a formal treaty would be helpful: The North suggested a declaration ending the war.

There is opposition to recognizing, at least to the extent of signing a treaty, such a brutally oppressive regime. However, peace on the Korean peninsula involves what the North is, not what we wish it to be. Washington had diplomatic relations with Nazi Germany, Stalin’s Soviet Union, and a host of ruthless dictatorships. Richard Nixon flew to Beijing to meet with Mao Zedong, one of history’s great mass killers. The DPRK also cannot be wished away.

Another concern is that agreeing to a peace treaty would reduce international pressure on the North, but that ship has already sailed. Kim's transformation from threatening lunatic to serious statesman has transformed South Korean public opinion and led both China and Russia to relax sanctions enforcement. Absent Kim's return to the scary figure of yore, the policy of "maximum pressure" is effectively dead.

Finally, some U.S. officials fear such an agreement would reduce the justification for U.S. troops in the Republic of Korea. But why should they remain if peace reigns? The U.S.-ROK alliance is, or at least should be, a means, not an end; for sixty-five years it was sold as necessary to protect the South. If it isn’t, then the troops should come home.

While costing little, creating a formal agreement or treaty would reinforce the Kim government’s retreat from confrontation. Even if relations later sour, Pyongyang would suffer significant embarrassment demonizing Seoul and Washington so soon after they joined together to end the decades-long conflict.

This approach also would help maintain cooperation with South Korea. At the April Moon-Kim summit, the two Koreas agreed to replace the armistice with a permanent peace accord. If South Korea, which tragically provided the battlefield seven decades ago, wants to declare the conflict over, how can the United States object?

Even more important, though, would be to advance Washington’s denuclearization agenda. President Trump believes that Kim Jong-un has committed to eliminate his nuclear weapons. If that is true—many observers find the abbreviated June 12 statement to be less than certain—Kim is more likely to comply if the rest of the agreement also is fulfilled. And that means ending the peninsula’s state of war.

A State Department spokesman announced: “As we have stated before, we are committed to building a peace mechanism with the goal of replacing the Armistice agreement when North Korea has denuclearized.” However, the North’s perspective is different. DPRK state media explained in late July: “The adoption of the declaration on the termination of war is the first and foremost process in the light of ending the extreme hostility and establishing new relations between the DPRK and the U.S.”

Washington understandably wants to eliminate Pyongyang’s leverage at the start of the process, which is why the North’s demand for normalization of relations first makes sense. Why give up your ultimate deterrent if you can’t trust your long-time enemies? No wonder, explained Kim Hong-gul, chairman of the Korean Council for Reconciliation and Cooperation and son of the late Kim Dae-jung, that “North Korean officials said they are frustrated about the delay and asked whether there is a valid reason for such slow progress.”

The DPRK understandably distrusts Washington, which has a disturbing—from other governments' perspectives, anyway—tendency to bomb, invade, and occupy weaker nations. But if the administration signs a peace treaty with Pyongyang, North Koreans are more likely to believe that President Trump has no ill intent. This will be even more the case if the ROK and China are part of that agreement. An American attack after ostentatiously promising peace would be embarrassing even for this administration. The United States could begin discussing the issue with North Korea but should include Seoul and the People's Republic of China at an early stage. (The legal details surrounding the issue are complicated, but no doubt could be overcome.)