Enduring Struggle: Why USAID Plays a Critical Role in the National Security Realm 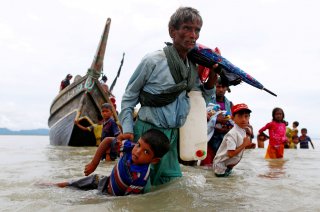 On Labor Day in 1961, President John F. Kennedy signed the Foreign Assistance Act which created a new organization, the U.S. Agency for International Development (USAID). The founding principle of USAID was to collectively unite Americans and the world to fight, in the words of Kennedy’s inaugural address, “tyranny, poverty, disease, and war itself.” Since that auspicious beginning, over the past sixty years, USAID has sought to carry out its ambitious mission against a complicated political background. From the Cold War and a wide range of global and regional tensions and conflicts to the remarkable improvements in health, education, and economic opportunity in the developing world, USAID has struggled, not always successfully, to sustain its development mission while responding to ever-changing political realities and directions. To this day, USAID continues to confront an operating environment shaped by competing humanitarian, political, economic, security, and foreign policy interests.

John Norris’ book The Enduring Struggle: The History of the U.S. Agency for International Development and America’s Uneasy Transformation of the World artfully captures the roller-coaster history of USAID. The book takes an unprecedented look at the achievements that have saved billions of lives as well as the setbacks that have threatened the agency’s very existence. It is exceptionally well-researched, with original materials from presidential archives, oral histories from USAID and other government officials, and interviews of USAID professionals and diplomats.

The Enduring Struggle benefits from previous studies of U.S. foreign assistance, such as Samuel Hale Butterfield’s U.S. Development Aid—An Historic First: Achievements and Failures in the Twentieth Century and Vernon Ruttan’s United States Development Assistance Policy: The Domestic Politics of Foreign Economic Aid. But John Norris fills a major gap with this highly readable narrative of the history of a single agency, USAID, through a political, development, and foreign policy lens. The Enduring Struggle illustrates the experiences of that agency through the administrations of eleven presidents, recounting USAID’s achievements and its failures with many personal glimpses of the work of USAID’s overseas staff. In the process, it highlights questions and provides some answers about why foreign aid and USAID have been subjects of controversy since the beginning in 1961 to the present day.

Kennedy, in his travels through Latin America and Asia while in Congress, saw newly independent states emerging from colonialism mired in political and economic turmoil. The novel The Ugly American, written by Eugene Burdick and William Lederer and published in 1958, left a deep impression on him. He believed America was viewed too negatively across the world and that its overlapping foreign assistance programs lacked a coherent purpose. Kennedy thought economic growth and development could become a subset of broader U.S.security policy—particularly in the backdrop of the Cold War.

The Cold War thus became a catalyst for many of USAID’s missions in Latin America, Asia, and Africa. Eighty percent of foreign aid in the 1960s was sent to countries threatened by communist expansion. America’s security interests influenced USAID programs as foreign policy priorities and anti-communism entangled with USAID’s development agenda from the 1960s to the 1980s. At times, the United States withheld aid from Marxist countries—like Ethiopia—in the 1970s. But also, USAID was sometimes required to promote development in anti-communist authoritarian regimes around the world.

Sometimes, USAID-managed assistance served as an instrument of pressure. For example, President Lyndon B. Johnson insisted on signing off on any food shipments to India until that country adopted economic and agricultural reforms. At the same time, USAID-sponsored research led to a green revolution that contributed to greatly increased grain production in India and helped to avoid continued reliance on foreign aid to prevent starvation,

This is somewhat common in USAID’s experience. Over the past sixty years, USAID has provided aid in countless humanitarian crises, in education, health, economic growth and poverty reduction, and in support of strengthening democratic governance. The Enduring Struggle describes disparate examples of success, as in USAID’s partnership with Korean reformers who transformed their economy and built a more inclusive society. It also discusses failures, as in Haiti where economic and social conditions have continued to deteriorate.

Norris also vividly describes how, at home, USAID has been a target of controversy and relentless criticism. He brings to life the many attempts to drastically cut USAID’s funding, to abolish it, and to absorb its functions into the State Department, and he recounts the creation of new agencies to take on some of the activities that USAID had performed. In responding to these challenges, often as its workforce was shrinking and its historical expertise was in decline, USAID was seen as slow and directionless at times. Yet, with each attempt to reorganize or shut down the agency, USAID has remained resilient. Several effective administrators were able to find support in the White House and in Congress and to restore USAID to relevancy. Today, USAID works in more than one hundred countries and is widely regarded as a thought leader in the international development community.

The Enduring Struggle’s chronicle of USAID successes and failures ranges from issues of historic importance such as the green revolution, vaccination campaigns against devastating childhood diseases, and the innovative President’s Emergency Plan for AIDS Relief program to treat AIDS to the disappointments of initiatives such as the Alliance for Progress that were unable to achieve and sustain their often unrealistic expectations. There remain unanswered questions about the limits of development assistance in less than congenial environments, such as in the autocratic regimes where USAID provided support during the Cold War and in societies in conflict such as Vietnam and Iraq.

Many of the historical issues addressed in this book continue to be debated, such as the need for long-term funding and commitment for a long-term process like development and the tension between relying on local ownership as opposed to conditioning aid on demonstrated self-reliance. And there are unending challenges in trying to persuade the American public that USAID programs in poor countries are serving the U.S. national interest.

Former USAID administrator Henrietta Fore has captured well the essence of The Enduring Struggle by describing it as “lively, compelling, and long overdue” and “a must read for anyone who cares about development and America’s place in the world.” Whether for a development practitioner or a member of the public, this book is a fascinating account of the history of perhaps the least understood U.S. government agency.

Daniel F. Runde was a former USAID official in the George W. Bush Administration, the current Chair of the Advisory Committee on Voluntary Foreign Aid, the official federal advisory committee that advises USAID, and is a Senior Vice President at the Center for Strategic and International Studies.