Energy Dominance Is Within Trump’s Grasp 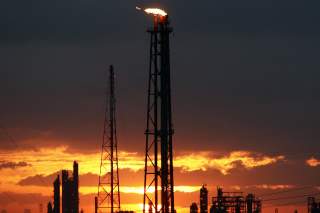 The tariff weapon is a double-edged sword with China, the fastest growing market for U.S. hydrocarbon exports. Beijing threatens to impose a 25 percent import duty on all American energy products in retaliation for new U.S. steel (and other) tariffs levied against it. This will hammer U.S. crude oil exports, twenty percent of which reached China last year. The pre-tariff war expectation of $6.7 billion from American LNG sales to China by the end of this year, must be radically revised. Then consider the cloud now hanging over investment in midstream and downstream infrastructure.

In addition, American coal miners—particularly those extracting bituminous coal from West Virginia—may face a rapid reversal of last year’s 100 percent growth in coal exports to Asia. It would take little effort for China to replace the 3.2 million short tons of U.S. coal with product from other countries, while the impact for certain American producers would be catastrophic.

Iran provides another example of how the impact of foreign-policy decisions on American energy security can trump favorable domestic conditions. Withdrawing from the Six Power Iran nuclear deal, and the imposition of new sanctions, will raise oil prices. Iran’s oil production will shrink from the current production of two million barrels per day, but by how much will hinge on international sanctions compliance. Goldman Sachs projects a global price increase of between $3.50 and $7 per barrel. By those estimations, Washington’s Iran policy may be twice as consequential as the TCJA. American motorists, some of whom vote, will feel the sting very quickly.

Notwithstanding the current administration’s wanting to buttress an already favorable pro-shale investment environment, gravely unsettled trade politics have created chaotic investment conditions. The consequences pose a countervailing danger to the pro-shale regulatory and policy edifice. Though guilty of multiple errors elsewhere, the Obama presidency has left behind a legacy landscape propitious for the oil-and-gas sector.

If this unexpected president aims to consolidate the “energy dominance” he now senses within America’s grasp, he could begin by accepting the pro-industry policy achievements achieved by previous administrations [i.e., those of George W. Bush and Barack Obama]. He might also re-evaluate the blowback effect of his foreign- and trade-policy decisions—which will impede or even undermine the astonishing progress of U.S. shale operations.

James Clad is the senior fellow for Asia at the American Foreign Policy Council and former U.S. Deputy Assistant Secretary of Defense for Asia-Pacific Security Affairs.

James Grant is a junior fellow with the American Foreign Policy Council where he specializes in Geopolitics, Energy Security, and Economics.