Energy Incoherence: Why Europe Is Repeating Its Mistakes 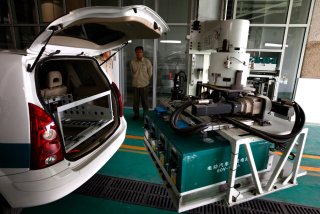 For years, Brussels’ fantasy of an energy policy has been shaped by politicized environmentalism. Many expected that the Europeans would take a more realistic approach to deal with the energy crisis triggered by Russia’s invasion of Ukraine.

Those people should prepare to be disappointed. Indeed, the European Parliament recently voted to ban the sale of gasoline- and diesel-powered cars by 2035.

The European Union (EU) continues to float in energy La La Land. Will the Green transformation to renewables deliver reliable, affordable, and abundant energy by 2050? No. Will it achieve zero emissions by 2050? No. The biggest impact of the Green agenda has already been registered: it has thoroughly compromised European security.

Yes, the EU parliament just labeled “some” gas and nuclear projects as “green investments,” but not because they accept that powering the world by wind and solar is an impossible goal. They are struggling to keep the lights on, so they’ve simply re-branded these projects to maintain the fiction that they are still on the path to all green.

Brussels’ misplaced priorities in long-term energy policy have already produced energy shortages. These have been economically devastating, especially for working-class Europeans. This, in turn, has aggravated the social tensions that have arisen because of the pandemic. Yet, Brussels thinks the answer is to make transportation less accessible to Europeans.

The latest misstep from Brussels not only misses the mark for dealing with the Russian threat to energy security, it whiffs on the China problem, too. The carbon-fueled vehicle ban will make Europe more dependent on Beijing, which controls the market of batteries for electric cars. That’s not expected to change, as the People’s Republic of China is rapidly buying up the rights to lithium reserves in Africa and Latin America.

Italian minister of economic development Giancarlo Giorgetti quite rightly described the European Parliament’s ban as a “gift to China.” Giorgetti has long worried about Beijing's growing influence in Western Europe. He has often vetoed Chinese industrial acquisitions in Italy to protect crucial national assets. In Brussels, however, he is but a voice crying in the wilderness.

Brussels is going against all logic. Even as it aims, through sanctions, to punish Russian president Vladimir Putin and to reduce its dependence on Russian energy, it is increasing its dependence on China, an authoritarian regime that maintains close relations with Moscow and has not condemned the Russian invasion. Furthermore, the Communist Chinese Party notoriously relies on trade ties to increase its political influence in several European countries and shatter transatlantic relations. Sanctioning Moscow and getting closer to Beijing makes zero sense.

Unfortunately, this is not surprising. It was a shortsighted energy policy that led the EU to become overly dependent on Russian gas to begin with, a product of the admixture of the rantings of fanatical activists like Greta Thunberg and serious mistakes by Angela Merkel, who made Germany (and the entire European Union) obsess about going green while ignoring the risks of dealing with an increasingly aggressive regime in Moscow.

Has Europe really learned anything? If Merkel is the benchmark, the answer is no. Instead of apologizing for these disasters, the former chancellor recently defended her past policies, as if it was not foreseeable that Putin might use the threat of cutting off energy to bend Europe to his political will.

Allowing itself to become energy-dependent weakened Western deterrence against Russia, thereby helping entice Putin to invade Ukraine. Now, by banning petrol and diesel cars by 2035, the European Union appears ready to throw itself into China's arms: the Russian-Ukrainian lesson has evidently taught Europeans nothing.

The transatlantic community needs to start making some hard choices. The West needs energy without being dependent on its enemies. The West also will need oil, gas, and nuclear power to prosper, ensure energy security, and be a good steward of the planet and the environment.