England's Submarines Are One Step from Nuclear Disaster 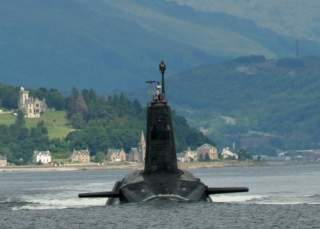 If this whistleblower is right, the most amazing fact about Britain's Trident nuclear missile submarines is they haven't blown up yet.

William McNeilly, a submariner who has served on Royal Navy Trident subs, is under arrest right now for disclosing official secrets. But in the 18-page document he leaked, McNeilly paints a picture of Britain's seagoing nuclear deterrent as so comical that the name of at least one sub should be changed to HMS Pinafore.

McNeilly who describes his job as "Engineering Technician Weapons Engineer Submariner," comes across as a bit of an Edward Snowden-esque character. He eavesdrops on meetings between his sub's officers. When he wants to copy a top-secret Trident missile manual that isn't allowed to leave a secure compartment, he brings along his Android smartphone and dictates the contents into the device.

"I had envisioned a system with strict security and safety. I didn't see how wrong I was until I arrived at HMS Neptune,” McNeilly writes. He first became disillusioned when he showed up at the Faslane, Scotland sub base and the guard barely even looked at his ID. Nor was it just the crews who breezed through security. "Hundreds of contractors go down the boat when it's alongside. Their equipment isn't searched and they are not pat[ted] down. All it takes is someone to bring a bomb onboard to commit the worst terrorist attack the UK and the world have ever seen."

He continues: "If airport security and nuclear weapon security were both compared to prisons, the airport would be Alcatraz and Base security would be house arrest."

McNeilly may be too generous toward America's nuclear forces, whose once steely-eyed image of rigorous competence has also taken a beating lately. Nuclear warheads were mistakenly loaded aboard B-52 bombers in 2007. Top Air Force commanders have been dismissed for poor performance, missile silo crews cheated on exams, there was only a single special wrench to maintain 450 missiles, and morale among Air Force missileers is rock-bottom.

Even the U.S. Navy's no-nonsense nuclear power program has been tarnished by cheating that would have sent Hyman Rickover rolling over in his grave.

However, if McNeilly's allegations are true, they come at a particularly troubling time for Britain's strategic deterrent. Its four Vanguard-class Trident submarines are aging and will reach the end of their operational life in the 2020s, not to mention that they are based in a Scotland that may soon become independent. British political parties are split over whether to replace them or find a cheaper alternative like cruise missiles.

The utility of fielding a small number of subs designed for thermonuclear war can be debated in the post-Cold War environment. What is not debatable is that Trident is a complex and expensive proposition for a fading middle-weight military power like Britain. The United States might be able to shrug off this expense, but not so Britain. If it can be shown that Britain's missile subs are being run like something out of a Gilbert and Sullivan opera, then it might be time for a change.