Enough Is Enough: Time to Ditch the Iran Nuclear Talks 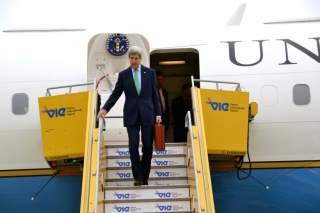 It’s time to walk away from the Iran negotiations. They have failed in their purpose, and they are putting stress not only our alliances but on our own politics beyond whatever worth there may be in a nominal deal at this point. We had one goal – to extinguish Iran’s ability to build a nuclear weapon – and we will not achieve it. Is the “process” really worth the price now?

Let’s review the bidding. Remember how the Western powers reached an “interim deal” with Iran over its nuclear weapons program in 2013? Our deal-to-make-a-deal agreement back then, the White House assured us, “halts the progress of Iran's nuclear program and rolls it back in key respects.” We recognized no sovereign right, as Iran demanded, to enrich uranium, and we had a hard limit of six months to get the whole business nailed down.

Almost immediately, the Iranians were openly gloating over what they saw – rightly – as the defeat of the Western effort to cage their nuclear program. A year later, the Russians are making military deals with Iran while pretending to work with us. British Prime Minister David Cameron has been reduced to making phone calls to concerned U.S. senators, while Israeli leader Bibi Netanyahu is soon to take his case to the Congress with an invitation from Speaker John Boehner that is an embarrassment both to the House for making it and to Netanyahu for accepting it.

Meanwhile, the American debate has sunk into a morass of false choices. Concerned U.S. legislators in both parties warn that without more sanctions, we’ll face an Iranian bomb. The president retorts that additional sanctions will actually lead to the same Iranian bomb – or in the worst case, war. Passionate advocates of negotiation promise that a deal to avert an arms race in the region is at hand, while opponents of further negotiation believe that we are doing nothing but deceiving ourselves with naïve faith in the magical powers of meetings in Geneva.

(Recommended: 6 Best Presidents of All Time)

None of these outcomes is likely. As long as the current regime of terror-supporting mullahs is in power, Iran is not going to give up its nuclear program. And no, we’re not going to war in Iran anytime soon; it’s not only a bad idea, but for two more years we have a president who has all but vowed never to do it. (With Iran, the Obama White House continues its strange practice of saying “all options are open” and then opening negotiations by publicly reiterating all the things we won’t do.) And while Iran will never give up its nuclear option, it will not build a bomb next week, next month, or even next year.

If we’re going to think seriously about the future of our negotiations with the Iranians, then we should start by being honest: the negotiations have already failed.  Now, we need to think about how much more of our credibility we’re willing to spend on the process of negotiation itself. This process has become humiliating, not least because our diplomatic body language is telegraphing an eagerness for a deal – any deal – with such clumsy obviousness that only the dumbest opponent could fail to notice it. We’re arguing with each other more than with the Iranians, who already have what they want and are more than happy to watch us all carp at each other.

The problem of credibility is especially pressing because the Obama administration – the guardian of the legendary Syrian red line – has already mortgaged American credibility through inattention and half-measures elsewhere. From Ukraine to the Middle East and beyond, the Obama administration has made it clear that foreign policy is little more than a distraction and an annoyance. If credibility were money, our account has been mismanaged worse than Greece’s pensions.

So let the talks end. Tell the Iranians that we’ve given up on the hopes that propelled us into this round back in 2013, and that they – and their Russian enablers – have convinced us this is futile. Make clear we will now return this problem to our internal democratic processes for further action. In the meantime, enough talk about votes in the Senate: after all, why give Iran a pretext for walking away when it should be our idea to leave in the first place? (A Senate vote is a bad idea in any case. Like many conservatives, I am determined to defend the prerogative of the executive branch to conduct America’s diplomacy, regardless of the occupant of any given Oval Office.)

We’ve done this before, and the sky did not fall. In 1983, we struggled to find a nuclear arms deal with the Soviet Union. Through over one hundred meetings, the Kremlin’s negotiators stiff-armed us. Eventually, the Soviets threatened to leave the negotiations. We then did the one thing that they never expected: we let them walk.

This was not without risk. What followed were some of the worst days of an already frosty Cold War, and the Soviets did not return to Geneva for another 15 months. The Reagan administration was criticized at home and abroad. But we finally broke a long-standing Soviet assumption that we valued negotiations for their own sake, and showed that arms talks could not be dragged out forever. We reestablished the principle that deal-making is supposed to produce an actual “deal” worthy of the name.

As we found out later, there were Soviet diplomats who wanted an agreement on nuclear weapons in Europe as much, if not more, than we did, but (as they later admitted) they had no chance of getting past the hardliners then in control no matter what we offered. In the end, we banked more credibility for the future by walking than talking, and the new Soviet regime under Mikhail Gorbachev – after a futile attempt at testing Reagan one more time in 1986 – finally made a deal on European nuclear arms in 1987.

We should do the same now and put this process out of its misery. Make no mistake: this would be a bad outcome. But talking isn’t always better than silence, especially if neither side has anything useful to say. (Recall, for example, that the president wisely skipped a summit with Vladimir Putin after the invasion of Ukraine.) And it’s better than a bad deal that burns up what little credibility we have left just to get a piece of paper.

There’s an outside chance that a walkout could set the stage for a better round of more realistic talks. That’s not likely, but if not, so be it: we’re no worse off than we were a year ago. The president, like many of his predecessors, is using his last two years to shore up his legacy, but there has to be a limit to the costs the nation endures. The sad fact, however, is that we already tanked our own position long ago: there is no better way to doom talks, whether over nuclear weapons or buying a used car, than to make plain that you fear the collapse of talks more than anything else. The mark who walks into a showroom and says “I absolutely must buy a car today” is the dream customer of every ruthless salesman.

If there is any hope of getting an actual deal that meets the goal we set for ourselves two years ago, it’s by walking away from this mess. We might start again later, or leave it all for a new administration that might be less encumbered by our current failures. Either way, the process has failed, and we’d best get past our denial about it.