Enough Is Enough: Why the U.S. Must Address Russia’s Violations of the INF Treaty 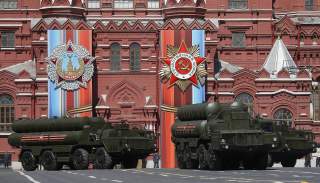 The future of the Intermediate-Range Nuclear Force (INF) Treaty is in jeopardy. Reports of a Russian deployment of ground-launched cruise missiles (GLCMs) threaten to undermine the Treaty—one that not only eliminated an entire class of weapons, but has also proved instrumental in providing global nuclear security and the basis for several strategic arms agreements between the United States and Russia.

The U.S. Congress recently reached a compromise between both of their chambers’ versions of the the 2018 National Defense Authorization Act (NDAA), deciding to allocate $58 million to “counter Russia’s violation of the Treaty, including for research and development of a U.S. ground-launched cruise missile system.” While the development of this missile is in compliance of the treaty, it would undoubtedly be interpreted as a provocation by the Russians and could lead to the collapse of the treaty.

Signed in 1987, the INF Treaty prohibits the development, testing or possession of ground-launched cruise and ballistic missiles with ranges between 500–5500 km and provides unprecedented intrusive inspections. Russia, according to U.S. intelligence reports, has in recent years developed and deployed dozens of GLCMs dangerously close to European borders. The survival of the treaty is at stake, posing a threat to American security interests and NATO allies.

Russia’s violation of the treaty has received wide attention in the media and has been the subject of comments from the vice chairman of the Joint Chiefs of Staff, Air Force General Paul Selva. He testified to Congress in March 2017 that the U.S. military believes that “the Russians have deployed a land-based cruise missile that violates the spirit and intent of the Intermediate Nuclear Forces Treaty.” General Selva is the highest-ranking U.S. official to go on record to explicitly address Russia’s violations. Furthermore, lawmakers, including Senator Tom Cotton (R-AR), introduced a bill that would declare Russia in “material breach” of the treaty. If passed, this bill would be the first step toward withdrawing from the treaty.

Russian President Vladimir Putin’s flagrant disregard for the integrity of the treaty is destabilizing to global security. Unlike his predecessor, Mikhail Gorbachev, Putin has exhibited an unwillingness to negotiate or even acknowledge his country’s potential violations of the treaty’s framework. In fact, Putin denies Russia is breaking the agreement and argues that the United States is breaching the agreement by placing a missile defense launch system in Europe that he claims can be used to fire cruise missiles.

The current political landscape is very different than 1987 when the Treaty was negotiated—incentivizing the Russians to come to the table without deploying new nuclear weapons or escalating tensions will be a political and diplomatic test.

The best way for the United States to deal with this issue is through diplomacy. The Trump administration must engage in direct talks with the Russians to encourage them to reenter compliance with the treaty once again. Such an effort though would include a careful declaration of Russia’s treaty violations. While this could have unforeseen repercussions, the consequences of inaction regarding this issue would escalate U.S.-Russian tensions further and make the world a substantially less safe place.

It will not be easy. Traditional diplomatic channels are strained due to escalating tensions following reports of Russian interference and the dissemination of propaganda in the 2016 U.S. presidential election. Over the summer, the Russia expelled 755 U.S. diplomats, significantly diminishing the U.S. diplomatic contingent. The United States took retaliatory measures against Russia and forced the closure of its consulate in San Francisco. Furthermore, President Donald Trump’s odd relationship with Putin—shown just recently by his lack of desire to condemn Putin’s rogue actions—has contributed to the web of complexities in navigating the future of the treaty.

With tensions arguably at their highest since the Cold War, the United States faces a unique challenge with negotiations. The Russian denial of their violations will pose many difficulties. The first step must be an acknowledgement on their part of their infringement of the treaty. This may be the hardest step, considering the Russian’s past history of deniability. Regardless, the United States must take action through diplomatic measures, initiating a conversation with the Russians to explicate the implications of their lack of compliance and the U.S.-led consequences they will incur.

To increase diplomatic pressure, many have proposed a tougher approach, such as increasing the U.S. nuclear arsenal and loosening the conditions under which we would use nuclear weapons, the deployment of more missile defense systems in NATO countries in Europe, or even the U.S. deployment of GLCMs. However, these steps could spark a new arms race. Moreover, even testing GLCMs violates the INF Treaty. The United States cannot allow a previously banned class of nuclear weapons to become normalized once again.

The United States, therefore, would be better off—politically, economically and strategically—to instead deploy offensive and defensive conventional weapons in Europe as a way to encourage Russia to return to compliance. U.S. conventional superiority over Russia is unquestionable, and should be utilized instead of deploying missile defense systems. Other options include conducting joint-exercises with our counterparts in Europe, or even the deployment of submarines or conventional standoff weapons. In Europe, if necessary, the United States can deploy air-launched cruise missiles to our allies that are allowed by the INF Treaty. All of these choices are not only less dangerous but could give the Russians an incentive to comply.

The perils of withdrawal cannot be overstated. Not only would it symbolize a lack of commitment to our word, but also threaten to destabilize other existing arms control treaties such as New START. New START is up for re-extension in 2021, and many lawmakers have expressed an unwillingness to renegotiate or extend the treaty with the Russians while it is in violation of the INF Treaty. A combination of diplomatic and conventional measures need to be implemented as soon as possible to allow for enough time for the inevitably long and draining negotiation talks. Otherwise, U.S. leverage and global security are both at risk, particularly at a time it is facing challenges in the nuclear arena with North Korea and Iran.